If It’s Good Enough For Monkeys… 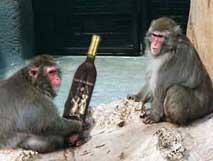 Not that I really need any more excuses to pop a cork. But if you’re looking to rationalize with anyone about that next bottle you’re about to open, you can now say that the Hungarian apes recommended it. Or perhaps more correctly, Hungarian zookeepers. Apparently the apes and monkeys at the Budapest Zoo go through 55 liters (a little more than 6 cases) of red wine a year. That seems far too little to me, only a little more than a bottle per week for the entire primate population of 11, but apparently the monkeys don’t need too much. “it’s mainly good for their blood cells” say the zookeepers, who mix it into their tea at mealtimes.

When pushed for the apes’ favorite vintages or producers, the zoo staff were reportedly a bit cagey, insisting that the wine they serve was just ordinary table wine, and that they didn’t even break out a nice Biklaver for special occasions. I suppose the apes can totally forget about getting any Tokaji, not even 1 puttonyo.

Read the full story. Thanks to reader Tyler Pierce for the link.