I can’t imagine what Mendoza looked like in 1889. Somewhere in the world there must be photographs of the area, taken by an enterprising Argentinean photographer who lugged a big glass plate camera around the foothills of the Andes to document the local countryside. His images, were we able to see them today, would no doubt have shown what could only be described as rugged farmland, cut here and there with dirt roads, and broken only by the occasional tower of a windmill, which would look puny compared to the massif of Aconcagua in the background. If one were to look closely at the image, however, it would be immediately clear that the wine industry was booming. In and amongst the rows of corn and orchards were thousands of acres of vineyards worked by the enterprising hands of Italian, German, and Spanish immigrants along with indigenous farmers.

If luck were on our side, with a magnifying glass we might scan the amazingly detailed photograph and somewhere around the base of one of the windmills we might see the figure of a young boy, seven or eight years old, playing with a stick in the shade of a bright Autumn day.

Leoncio Arizu arrived in Mendoza in 1890 with his family to live on his uncle Balbino’s farm. Around that time, the family had just purchased a flour mill nearby, not so much for the flour as much as for the power of its windmill, which they planned to use to help irrigate their growing acreage of crops.

Leoncio quickly grew into a young man, and when the family’s first vines went into the ground in 1901, he was no doubt there in the fields with his sleeves rolled up planting cuttings along with the rest of his family. Whether because of his own interest, or simply because it was the thing to do in those days, Leoncio assumed responsibility for operations of the vineyard in 1908 and took the remarkable step of importing both machinery and 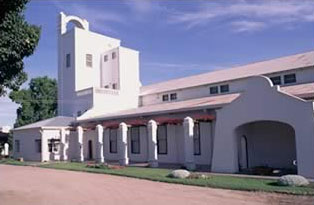 vineyard workers from England to modernize the vineyard. This was not a common (nor cheap) proposition at that time. This investment marked the complete commitment of the family to the vineyard business, and for almost the next 100 years, the Arizu family passed its winemaking tradition from father to son.

For decades, the family has made its wines under the name of Luigi Bosca. I’m kicking myself for not asking, but I neglected to find out just exactly who Luigi Bosca was during my visit. The family winery is situated on the very spot where the old flour mill used to stand. The subterranean tunnels which once carried water to the family’s farm have been enlarged and are filled with oak barrels, fermentation tanks, and all the equipment required by one of Mendoza’s largest wineries. Over the years the Arizu family has become one of Argentina’s most famous winemaking dynasties. From their introduction of technology to the region at the turn of the century to their involvement in the promotion of Lujan de Cuyo to DOC status in the early 1990’s, the Arizu name is inseparable from the history of winegrowing and winemaking in the region.

Still 100% family owned and operated by the Arizus , Luigi Bosca remains one of Mendoza’s most important wine producers. The winery makes numerous wines under several related labels. The Finca La Linda line represents their more value oriented wines. The Reserva line includes wines that see more barrel and bottle aging than the La Linda line, including the family’s DOC labeled Malbec. Finally, the Alta Gama range of wines represent the family’s flagship Gala bottlings and their most sought after single vineyard wines which carry the name of the vineyard, Finca Los Nobles.

While I don’t know the total case production of the winery, it must be quite large, as each of these different lines of wines has seven or eight different bottlings. When I went to visit, the number of wines available for tasting was staggeringly large, so we opted to concentrate on their upper range of wines. My tasting notes follow below.

2005 Luigi Bosca Sauvignon Blanc Reserva, Mendoza
Light green-gold in the glass, this wine has a yeasty nose of green apples and quince aromas. In the mouth it is light with a modicum of acidity and fresh fruit flavors of unripe apples and notes of quince on the finish. A pleasant Sauvignon Blanc that is easy to drink. Score: 8.5/9. Cost: $14. Where to buy?

2005 Luigi Bosca “Gala 3” White Blend, Mendoza
Light gold in color, this wine has an elusive mineral nose of wet felt, wet slate, and hints of vanilla. In the mouth it is crisp and animated with unique flavors of toasted popcorn and hints of the flavor of burnt popcorn seeds (the ones left in the pan which do not pop). The wine finishes nicely. A dry blend of 50% Viognier, 40% Chardonnay, and 10% Riesling. Score: 9. Cost: $28 . Where to buy?

2003 Luigi Bosca Malbec DOC, Lujan de Cuyo, Mendoza
Medium garnet in the glass, this wine has a nose of wet chalkboard, blueberries and cassis aromas. In the mouth it is medium bodied with a nice acid balance and light tannic structure supporting a myriad of flavors including bing cherries, cassis, chocolate, and hints of (not unpleasant) oak on the finish. A solid expression of the varietal made in a fruit forward but still restrained style. Score: 9/9.5. Cost: $25. Not available online.

2003 Luigi Bosca Cabernet Sauvignon Reserva, Mendoza
A medium ruby color in the glass, this wine has a classic Cabernet nose of cherries, leather, and hints of green bell pepper. In the mouth it proves to be made in a claret style, agile and not too heavy on the palate with excellent acidity and primary flavors of cherry. The tannins are substantial and a bit leathery yet, needing a couple more years to smooth in order to flow seamlessly into the very nice finish. Will no doubt age well for a few more years. Score: 9. Cost: $14. Where to buy?

2003 Luigi Bosca Gala 1 Red Blend, Mendoza
Dark ruby in color, and edging towards opaque, this wine has an uncommon nose for a Mendozan red wine, filled with aromas of plums, figs, and sweet vanilla. In the mouth it is dark and sikly smooth, with a rich full body and flavors of cherry and cola with hints of sweet roasted nuts that suface in a long finish. The tannins in this wine are delicate and nearly imperceptible, but present nonetheless, giving the wine substance and another layer of complexity. An unusual blend of 85% Malbec, 10% Petite Verdot, and 5% Tannat. Score: 9.5. Cost: $31 . Where to buy?

2003 Luigi Bosca Gala 2 Red Blend, Mendoza
Dark ruby in the glass, this wine has a deep nose of black cherry and wet earth aromas. In the mouth it is equally earthy and rich, with a nice mouthfeel and deep flavors of black cherry, loam, and hints of graphite that emerge along with the light tannic structure as the wine proceeds towards a moderate finish. This wine is a blend of 80% Cabernet Sauvignon, 10% Cabernet Franc, and 10% Merlot. Score: 9/9.5. Cost: $31. Where to buy?

2001 Luigi Bosca “Finca Los Nobles” Malbec Verdot, Lujan de Cuyo, Mendoza
Dark ruby in the glass, this wine has a rich, and high-toned nose with aromas of black cherry and plum which take on a candied aspect with air. In the mouth the wine is bold and full bodied with grippy tannins wrapped around a core of complex flavors inclucing leader, cherries, blackberries, and dirt. The wine has a pleasant, but not overly long finish. A very drinkable field blend of A majority of Malbec with some Petite Verdot, this is a wine that needs a bit more cellar time to polish out its tannins and better integrate them into what will be an even lovelier wine in a few years. Score: 9/9.5. Cost: $ 40. Where to buy?