The Re-Judgment Of Paris Results In California Landslide 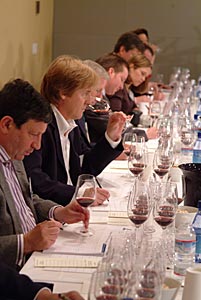 Everyone can give a big sigh of relief. We won’t have to go through that for another thirty years, and by that time all the angry people will be dead anyway. But for the next few months, there are going to be some REALLY angry people.

Today marked the 30th anniversary of the fateful Judgment of Paris, where European wine experts selected California wines in a double blind tasting over their French counterparts. Those of you who follow wine news with any regularity know that there’s been quite a bit of hoopla these past few weeks about today’s recreation of that 1976 tasting. The Rothschilds nearly boycotted the tasting, then there were moments when it seemed that the tasting wasn’t going to be blind at all, and various people, including some of the judges cried foul.

In the end, however, it seems like it all went fairly well. Most of the original red wines were tasted blind (not double blind because everyone knew which wines were going to be involved) and evaluated by panels of judges on both sides of the Atlantic. Then the panels went on to evaluate flights of French wines and American wines from the original producers, but not together, and not blind.

The highest scoring wine after 30 years was the Ridge 1971 Cabernet Sauvignon (I raise a congratulatory glass to Paul Draper at Ridge), followed by the 1973 Stag’s Leap, the 1971 Mayacamas, and the 1970 Heitz. The top five wines selected by the panelists in the blind tasting were from California.

This really surprises me. Sure, I’m a fan of California wines. I also happen to think that well made California Cabernet can age fantastically. But to have the top five wines at the tasting be California wines is a real shocker.

Of course, I don’t see this as a referendum on the quality of French wine in any way, but I’m sure some people will. This is presumably why a few of the French estates were so nervous about participating. Now, I’m sure they’re just gonna be pissed.

News coverage by the Independent immediately following the event characterized even the organizer and world renowned wine taster Steve Spurrier to be surprised, quoting him as saying “This has come as a real surprise to me.” Count me among the astonished.

The wines tasted blind today on both sides of the Atlantic were:

If anyone attended the tasting, or knows anyone who did here in California, I’d love to hear your thoughts on the atmosphere in the room.

Here are the complete results from the blind tasting.

A note on the scoring system: each panelist force ranks the wines according to their preference. Points are then assigned according to the number of wines. So in this case the top wine for each panelist received 10 points, the second ranked 9 points and so on. The number of points is then added up and tallyed for the final count. This system is known as the Borda Count system.

Combining the scoring from the two judging panels gives us: