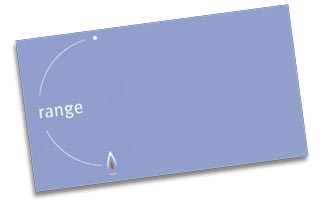 If orange is the new black, then small is the new big when it comes to San Francisco restaurants. Over the last 12 months, San Francisco has see a steady number of restaurant openings, the majority of which, much to my great satisfaction, are small operations that are bringing a wonderful variety of styles and charm to the San Francisco dining scene.

Many of these boutique restaurants are appearing in what has been (appropriately) dubbed the Valencia Culinary Corridor, and none of them is a better example of the nature and potential of this phenomenon than Range. I’ve now eaten several meals at there, and I’ve enjoyed them enough to be able to say without reservation that Range is probably my favorite new restaurant to open in the city in the last year or two.

A venture between the husband and wife team of Phil and Cameron West, Range offers diners a compact menu of California-inspired American dishes in an understated, yet impeccably hip atmosphere. Range took over a small space near a public park and recreation center which used to play home to a tapas bar of some sort, which I have dim memories of wandering into at some point in the last ten years, but beyond that, little recollection of what used to be there. I do remember enough to have been shocked the first time I walked into Range, so total was the transformation of the space.

The architectural and interior details are masterfully done (mostly by the proprietors) in a combination of clean industrial lines mixed with beautiful mid-century modern American touches. These small elements, from the 50’s futurist wall sconces to the glowing stars in the poured concrete bar, to the refurbished and repurposed blood bank which serves as a bar refrigerator, combine to create an atmosphere that both aspires to clear aesthetics but also manages to not take itself so seriously. Blurry photographs, narrow mirrors ringing the dining room, nice use of uplighting behind banquettes, and liberal use of candles and halogen spots make the space come alive with atmosphere. The dark chocolate wood accents against the soothing green walls balance the liveliness of the space with a bit of tranqulity. At least from a visual perspective.

Unfortunately, one of the other things that comes with both the compact design of the space as well as its increasing popularity is noise. Since opening, sound dampening panels have been installed in the back dining room, but they have had only a barely perceptible effect on what ends up being a fairly cacophonous dining experience, whether diners find themselves seated in the back dining room, the hallway seating near the kitchen, or the few tables up front near the bar. The noise level is one of the few complaints I have about the restaurant, and really the only thing that makes me think twice about dining there on Thursday thru Sunday.

To those willing to brave the din and the increasing difficulty in securing reservations without a week’s notice, a delightful meal awaits. The menu at Range changes daily, and takes advantage of seasonal produce that Chef Phil West, formerly of Bacar and EOS restaurant, can sometimes only find in small quantities. There are a couple of dishes that always seem to appear on the menu, but West does a good job of making at least subtle variations on these to reward those who might otherwise reluctant to repeat an order within the span of a few weeks. Of course it helps that chef West’s food is so damn good. While I may not opt for the roast chicken every time I go, when I do find myself unable to resist ordering it for the Nth time, I am never dissatisfied.

My other favorites that seem to never stray from the menu for more than a few days are the homemade ravioli, delightfully filled with something different every time I go. Last time I was there they were stuffed with sweet peas and morel mushrooms, and drizzled with their usual butter cream sauce. One of my favorite versions was stuffed with goat cheese and sorrel in a lime zest and butter sauce, a combination of richness of texture, buttery taste, and incredible aromatics from the lime that left me wanting two or three more plates of the stuff. Of course, I probably couldn’t have managed it — the food is rich and full flavored, and while it’s not heavy, it’d decidedly not diet. West clearly likes his protien, whether from fish, fowl or any number of creatures that run on all fours.

I’ve had some excellent venison and pork at Range, and West’s version of cassoulet is also a winner, with garlic sausage to accompany the duck confit and runner beans. One can usually also find some meaty fish on the menu, whether monkfish, halibut, or striped bass. These ocean dwellers are matched with a wide variety of flavors like melted fennel, black olives and lemon aioli; or perhaps roasted endive, trumpet mushrooms, and pancetta in a red wine reduction. West has a deft hand with flavor and texture combinations, and a particular way of taking any given preparation to a slightly untraditional (but wholly satisfying place) with the addition of a little something….interesting. Blood orange broth. Shrimp oil. Pomegranate. Fried capers. Wild nettle gratin. Peppercress. All of these are tiny touches, or small layers of complexity that elevate the food beyond the mere ordinary.

Up until recently, the weakest link at Range arrived in the form of the dessert menu. The first few times I ate there, I always found myself disappointed with the dessert. I even skipped it a couple of times. But I’m happy to report that the installation of new pastry chef Michelle Polzine has me excited for that little slip of paper that follows my habitually clean plate once again.

The last time we were there, Ruth had a bittersweet chocolate soufflé with cocoa nibs and crème anglais that was excellent, and I hungrily devoured my aprium and pluot tart with cardamom ice cream, but not before finding out just what the heck an aprium was. Turns out that it’s the same thing as a pluot, but different — which is to say it’s a cross between an apricot and a plum, but it leans more to the apricot, while the pluot, obviously leans in the other direction. In addition to finding the notion of them combined on one dessert titillatingly whimsical, the thing was also tasty as hell.

The wine list, like the dinner menu, can be described as compact and somewhat eclectic. The restaurant offers twelve to fifteen wines by the glass, nearly all of which break out of the prosaic tendencies of so many California restaurants these days. The other night I found a lovely Sicilian red blend and a nice Albariño to drink with dinner. Taking advantage of their $15 corkage policy, I often bring my own wine when we go to Range, but should we ever need another bottle, they offer an excellent selection of reasonably priced bottles (many hover in the $25 to $30 range) from around the world, most of which seem to have been chosen for their food compatibility rather than their prestige. Savvy wine consumers can pick out a bottle of 2004 Hirsch grüner veltliner heiligenstein, Austria for $26 or 2001 Campion Edna Valley Pinot Noir for $38 among their options.

The service at range is attentive and pleasant (no doubt due to owner Cameron West’s tenure as the floor manager at Delfina for several years), though it occasionally suffers from the same popularity that had Ruth and I waiting nearly 20 minutes past our allotted reservation time for a table. We were properly mollified with a free appetizer, though initially our waitress actually charged us for the dish (she was mortified, of course, when we pointed it out, and immediately removed the charge). Little slip-ups like these are tolerable, especially when the restaurant does the right thing by their customers, but they can easily turn into serious issues as a restaurant feels the pressure of high demand, as Range most certainly does these days.

If only because I will have a hard time NOT going there even if the service starts to slip, I hope the restaurant won’t become a victim of its own popularity. As seasoned restaurateurs, the Wests should have no problem. Range has become one of our favorite haunts in the city, because we can always count on good food, good wine, and a dining experience that is, at least to me, quintessentially San Francisco.

How Much?: Bringing our own wine, Ruth and I can usually get out of there for about $80 (including the corkage fee) if we’ve each ordered three courses.

Parking in the vicinity is rough, and near to impossible Thursday thru Sunday. Take BART to the 24th street station or take a cab if you don’t have the time to join the circling parking vultures. Dress is city casual. Reservations are a must, though single drop-in diners can usually get a seat at the bar for dinner without too much wait during the week.