Drinking Pink: Notes From the RAP Pink Out Rose Tasting 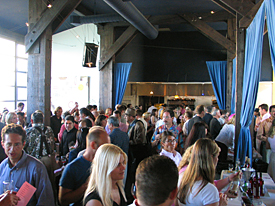 When the temperatures are topping out above 90 nearly every day in San Francisco, you know it’s hot. The poor folks in the rest of the country are usually anywhere from ten to twenty degrees hotter than we ever get, so we have no reason to complain. But we might have reason to heavily chill some rosé and take off all our clothes.

It’s no wonder then, that in addition to seeing more publicly bared flesh within the San Francisco city limits than I can remember in a long time, I also found myself at the RAP Pink Out Rosé tasting last week. It’s most certainly that time of year.

RAP, or as they prefer to be known, the Rosé Avengers and Producers, is an industry marketing consortium founded to dispel the stigma that has for so long plagued pink wines, at least in the United States. While the French have no problems whatsoever about drinking pink wines, here in America, wines of that shade are affronts to our masculinity. How this occurred we will never know, but the wine cooler craze of the Eighties coupled with the continued massive popularity of White Zinfandel may have something to do with it.

Needless to say, the efforts of the Rosé Avengers are well needed. This is the second year of their Pink Out tastings, and apparently the first one was well received enough that this year the tastings occurred in both San Francisco and New York.

Like last year, this year’s tasting was packed, even during the hours reserved for just the trade and media. While Butterfly Restaurant is certainly a pleasant space, it’s clear that the tasting has completely outgrown it. I powered through the wines and hightailed it out of there for fear of getting trampled. I can’t imagine how crazy it must have been when the public arrived. Thankfully this year they provided real spit buckets, which made the whole thing much easier to navigate for those of us who were intent on trying most of the wines.

While the Avengers are doing a great job publicizing their association, and exposing a lot of people to rosé wines, I can’t help but wish they’d also come up with some sort of Rosé University, that could bring some folks from Europe over to teach California winemakers how to make pink wines.

I’m sorry to say that the California wines (for the second year in a row) showed very poorly compared to nearly every European label present. When tasted next to a nice rosé from Provence or Spain, the American wines were too sweet, too flabby (lacking in acidity), and thug-like in their flavors compared to the delicate acidity of their European counterparts. There were exceptions of course, which you can see in my tasting scores below, but by and large the best wines of the day were all European.

Additionally, it’s clear that consumers need to be very careful when they buy pink wines, as there are some real dogs out there. I hate to bash anyone’s wines, so I’ll let my score speak for themselves, but it’s clear that there’s a lot of awful pink wine to be had.

I will not let that dissuade me from enthusiastically supporting the efforts of the Avengers in their cause, which is a noble one, and I will certainly be back next year, hoping that slowly but surely we’ll figure out how to make better pink wines in this country, and that more and more people will want to drink them.