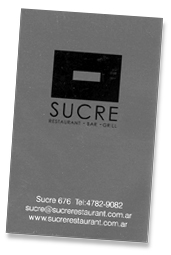 There’s a variety of hipness that’s universally understood in the early twenty first century, at least among first-world nations. Expressed through the convergence of modern industrial architecture, deep house music, exotic cocktails, great wine and great food, this essence of contemporary culture springs up in every major city, and attracts the beautiful, the adventurous, and the well heeled like moths to the flame. Its street address in Buenos Aires is Sucre 676.

Sucre Restaurant, ripped neatly off its foundations and settled down intact and operational, would be an instant success in every major metropolitan area I’ve ever been to, from Tokyo to Atlanta to London to Chicago. And, I’d be willing to bet, in many more besides. A quintessentially stylish eatery, it both provides a fantastic dining ambience and delivers a combination of food, drink and service that place it squarely at the top of Argentina’s dining destinations.

Simply put, it was our favorite restaurant that Ruth and I ate at on our whole two week visit to the country. We loved it so much that during a four hour layover in Buenos Aires on our way to our next destination, we dashed out and had one more lunch, suitcases in tow.

The restaurant sits just around the corner from some of the most sought after real estate in Buenos Aires ” large luxury apartment buildings that face the swath of public parks, museums, and conference centers that make up much of the BA waterfront. Despite fancy neighbors nearby, it’s a fairly unassuming address for a top eatery in the city.

Like most good restaurants in the city it has seating on the deck, allowing patrons to take advantage of one of Argentina’s singular pleasures ” a long lunch outside with friends, but first time diners will most certainly want to sit inside the masterfully done industrial interior.

The extremely high ceilings give the interior cement and wood space an expansive warehouse feel, which is reinforced (literally) with exposed beams and air ducts. Strangely the large glass windows that front the entirety of rectangular restaurant are much more visible inside as the natural daylight (or soft streetlamp and traffic lights)

pours over the dark wood tables with their black leather chairs and the dark chocolate wood floors. This soft light is punctuated with sharp impeccable lighting (which was surprisingly and pleasingly common in most fancy restaurants in Buenos Aires) and enriched by the colorful, three story backlit liquor shelves which catch everyone’s eye, even after they’ve been in the restaurant for hours. This may be due to the fact that every minute or two a silhouette crosses it on a wire catwalk on the way to the bathrooms. Better than TV. I swear.

The other dominant feature of the restaurant is the, for lack of a better description, cement monolith that rises from the center of the floor. This one story cube of cement, split down the sides periodically with panes of tinted dark glass, holds the wine cellar, which, much to my delight, descends another 15 feet beneath the floor of the restaurant.

Without the obstruction of this cube, the restaurant would be a simple, very large, rectangular floor plan, with banquettes on the left wall, a huge bar on the right, and lots of tables in between. The front wall opens to the deck while the rear holds the large open kitchen along with a series of high tables for six that allow curious diners a perfect view into the heat.

From the fires of grills, rotisseries, large ovens, and expansive cooktops, all under the direction of chef Fernando

Trocca, come a wide range of foods that are difficult to characterize other than to call them modern Argentinean. The ingredients are certainly Local in focus ” lots of delicious beef and lamb plus some seafoods ” but with splashes of international flavors, style, and presentation. One may not visit Argentina looking for refined food ” this is certainly the land of big steaks, after all ” but it’s impossible not to appreciate the detail of flavor, texture, presentation, and quality of ingredients at Sucre, especially when so many restaurants in town are lacking on more than a few of those fronts.

We dined relatively early our first time there (9:30 PM in Buenos Aires is the equivalent of a 5:30 reservation in San Francisco) and thinking that the chef might have the time and inclination, we asked for a menu de degustacion. Though slightly taken aback by the request, the waitress was more than happy to petition the chef on our behalf and before we knew it, the menus had been whisked away and we started on our journey through the talents of the kitchen and the depths of the wine cellar (courtesy of sommelier Ignacio Díaz Aguirre).

At this meal and at our subsequent ones, the kitchen proved very versatile in its handling of an amazing array of flavors especially when it came to seafood, an area of cuisine that is generally very weak in Buenos Aires.

Some of our favorite dishes included an octopus carpaccio served with cascina pepper powder and citrus salts over mache which had a tenderness and juiciness that is very difficult to coax out of big cephalopods. We were

also served an absolutely astonishing ceviche of pink salmon with a sauce of passionfruit and shallots that was simply transcendent in is flavors. Ruth and I argued playfully for a while about whether it was better than the squid stuffed with braised oxtail in a balsamic reduction, but got cut short when the meat started to arrive on the table. Before moving on to some of the other dishes I can’t in good conscience forget to mention what was described to us as a whitefish confit with arugula, “Berro” sauce (?) and pine nuts, but which clearly was crack cocaine in a bowl. This stuff was so good we literally polished the bowl clean, but ask me to describe its flavor and I am at a loss. Calling it the seafood version of the best duck confit I’ve ever had somehow doesn’t do it justice.

Perhaps less surprising for its expert handling in the Land of Meat, were the grilled sweetbreads over cake and “morchicha” (I’m still not sure what this is), served with a chorizo sauce and bits of green apples. The crispy, creamy richness of the sweetbreads, with the kick of chorizo, a little starch and the tart acidity of the green apples felt like fireworks in the mouth. After dishes like that it’s impossible to describe a perfectly grilled and spiced rack of lamb or beef tenderloin without them sounding a little blasé, but trust me when I say they were divine. Amidst the meats and the seafood are other gems to be savored, such as a fantastic shrimp risotto with truffle oil and stewed

tomatoes or a delicate cheese ravioli, which sported some of the nicest flavored cheese we had on our trip.

By the time we finished 12 courses at 2 AM on our first visit, we were flagging a little and we asked for just one small dessert each, but the pastry team was having none of that, apparently. Instead we received two of the largest serving platters I have ever seen on a restaurant table each with an immaculate array of no less than seven desserts on each. There was no overlap between the two platters. Mustering a reserve of stamina, Ruth and I munched our way through chocolate layer cake, chestnut parfait, dulce de leche tarts, cheesecake, white chocolate sorbet, honey ice cream with nuts, fresh cannoli with chocolate filling, banana crème caramel, and more. Each was beautifully made, and delicious, but some of them were rather prosaic compared to the more adventuresome combinations of flavors and ingredients throughout the rest of the menu.

The service at Sucre sets a gold standard for Argentina as far as we are concerned. Even at the height of the dinner hour, water glasses remained filled. Silverware and tableware were changed out sometimes so smoothly as to escape notice. Servers were warm, even to two obvious tourists, but not intrusive or ingratiating. While we had more formal service elsewhere, we thought that Sucre hit just the right note of professionalism and care, despite the bustling more casual nature of the restaurant.

There are only a few restaurants in Buenos Aires that have better cellars than Sucre. The list on offer is deep, but not in terms of older vintages (the oldest reds only went back to the mid 1990s) or any international wines. Of course, we didn’t go to Argentina to drink French Bordeaux, so that hardly mattered to us. There is an excellent representation of local producers though the list tends towards the larger producers, offering fewer small

production wines. There are some real gems to be had at markups (and base prices) that make a majority of wines available to anyone used to spending even fifty dollars a bottle in the United States.

Perhaps the highest compliment I know how to pay Sucre is a fervent desire to return to Buenos Aires, motivated in part simply by a desire to dine there again. Even without its gorgeous interior, trendy atmosphere, and excellent service, the food alone stood head and shoulders above almost every other restaurant we visited on our trip, making Sucre a must for anyone visiting Buenos Aires.

How Much?: $25-30 US per person for a normal meal including wine. Our tasting menu with wine pairings ran our tab up to about $65 per person.

Dress is a snazzy casual elegant, and reservations are a must, though there are tables set aside for walk-in diners. Apparently the bartenders are legendary, so if you have to wait a while for the table, you’ll be well taken care of.