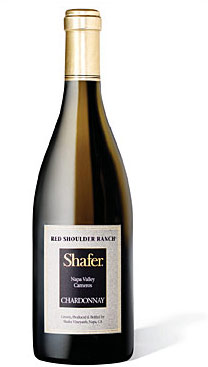 Nobody likes to be pigeonholed. It’s easy, though, to be typecast when you’re really, really good at doing one thing. There are a lot of wineries whose product portfolios are victims of their own success, and nowhere is that true more than Napa. So many people are looking for that blockbuster Napa Cabernet to put them on the map, but ironically when they make one, quite often it eclipses all of their other offerings.

Which is why many people might be saying as they read this, “Shafer makes a Chardonnay?!?”

Shafer Vineyards is, of course, known for their red wine, in particular for their Hillside Select Cabernet, which in my opinion is one of the most consistently excellent Cabernets made in the valley. Since its founding in 1972 the winery has been a family run operation, and now the Shafer family is undeniably counted as one of the local dynasties who will likely be making wine for many generations to come.

in 1972 John Shafer left a career in the publishing industry and purchased land in what twelve years later would come to be known officially as the Stag’s Leap District. In the process of transforming the property into a viable, working winery, he began pursuit of what would become a full second career — first as a viticulturalist and then as a winemaker. Shafer, along with his son Doug (who know runs most of the day-to-day operations of the business) and the family dog, Tucker, personally and painstakingly revitalized the estate to its current 200-acre size. In the thirty years this work required, Shafer also built a reputation as one of Napa’s best producers of red wine.

I’ve watched, and tasted, Shafer wines for as long as I’ve been able to afford good quality Napa wines, and I’ve always been impressed with the consistency and quality of the wines under the hand of winemaker Elias Fernandez, who has been with the winery since 1984. It was only recently I learned that in that time Shafer has nearly tripled production, to the point at which they are making nearly 35,000 cases of wine. That’s a drop in the bucket for some of Bordeaux’s biggest producers, but in the world of luxury Napa wines ($50 and up) that’s a pretty huge production level. Yet despite the volume, Shafer (like a select few other wineries in the Valley) manages to make great juice every year, sometimes seemingly even in defiance of tough harvest conditions.

In keeping tabs on Shafer’s wines over the years, I’ve also been thrilled to see the winery’s commitment to innovation and environmental responsibility. Last year the winery dropped completely off the grid, becoming one of California’s first completely solar-powered wineries. They’ve practiced sustainable (though not organic) farming for years, including the use of raptor houses in their vineyards to combat rodent pests — a practice which inadvertently has given this wine its name. The vineyard in the cool reaches of Carneros which produces the winery’s chardonnay also plays host to Red Shouldered hawks, who help keep the vineyard gopher-free.

Shafer, and winemaker Fernandez also always seem to be experimenting with new technologies, the latest of which is apparently a NASA commissioned technology which uses UV light and some other classified technology to eliminate up to 99% of airborne nasties — bacteria, mold, and yeasts — which can cause problems at various stages of the winemaking process.

Despite being a technology early adopter, the winery is best known for the right reasons — making great wine, in particular, Cabernet Sauvignon, Merlot, and Syrah. The estate also used to make a Sangiovese, which recently saw its last year of production — one of the few experiments by the winery that didn’t seem to prove out suspicions of a Midas Touch when it came to everything wine.

And of course, the winery also produces this Chardonnay from its property in Carneros. Interestingly it is one of the few (though they are becoming more numerous) California Chardonnays which undergoes no malolactic, or secondary, fermentation. Many wines of both colors undergo two stages of fermentation. With Chardonnays in particular this second stage, and the lactic acids that are its byproduct, is partly responsible for the creamy character that many people love in their white wine. This process also has the effect of lessening the overall acidity of a wine (both red and white) and by avoiding it, Shafer seems to be aiming to produce a crisper, zingier wine that escapes many of the stereotypical buttered-oak-plank characteristics of so many California Chardonnays.

The wine is 100% Carneros Chardonnay, and is barrel fermented in individual oak barrels using native yeasts. It is aged on its lees (the particulate matter left over after fermentation) for 14 months in a combination of 80% French oak and 20% American oak, of which only 50% of each are new.

Tasting Notes:
Light yellow gold in the glass, this wine has a nose of bright pineapple aromas with hints of golden delicious apples and a light floral quality. In the mouth it is crisp, with lively acidity that brings a freshness to the flavors of lemon zest and grapefruit that are the core of this tasty, but not overly complex wine. There is a little bit of heat (the wine weighs in at 14.9% alcohol) on the nice finish, which would likely be minimized by thorough chilling. As usual, I tasted it at room temperature.

Food Pairing:
This wine was a very nice pairing with a dish that a friend cooked for us recently that was somewhat similar to this recipe for stuffed squash.