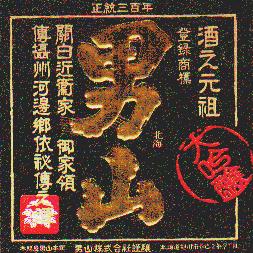 Sake is made in the depths of winter, when the frozen air is at its most pure, and the water is barely flowing. Many sake breweries are situated in locations expressly designed to capitalize on the pristine qualities that winter can bring to the sake brewing process.

It’s no wonder, then, that there is some darn fine sake being made on the island of Hokkaido, Japan’s northernmost island. Here the snows blow in from the Sea of Japan, and fall heavy and deep after a short, brilliant Autumn. Temperatures regularly drop below zero, and like many places in the extreme north, the seas often freeze solid for extended periods of time. Hokkaido also has rugged, mountainous terrain springing up inland from its coastal plains which captures and holds the snowfall, channeling it deep underground where it is naturally filtered, and from where it often emerges as natural mountain springs.

One of the most famous of these springs is the Shikomimizo spring that emerges from Mt. Taisetsu near the town of Asahikawa. And from this spring water, a sake brewery named Otokoyama (literally translated as “Man’s Mountain”) has been making sake for more than 340 years. Apparently it was the drink of choice for the Shoguns of the Tokugawa family in Japan’s Edo period. It is certainly old enough and famous enough to have been featured in several of the ancient woodblock paintings by artist Utamaro who showed a dual affinity for beautiful women and alcoholic beverages, especially sake.

Otokoyama is now one of Japan’s largest sake producers, and like many of the other larger breweries, they offer a a dizzyingly complex array of products, very few of which ever make it to the US. I believe Otokoyama exports five sakes, of which this is their finest. It is made from Yamada Nishiki rice, the favored sake rice grown in the Hyogo prefecture which for all intents and purposes is the heartland of sake production in Japan. The Hyogo town of Itami was the most famous sake town in Japan’s history and many sake making dynasties, including Otokoyama’s had their origins in Itami.

Tasting Notes:
Completely colorless in the glass this sake has a classically daiginjo floral nose with hints of jasmine tea and just the tiniest hints of fresh pink bubblegum. In the mouth it is smooth and extremely silky in texture with lovely acidity and a floral, rainwater quality that makes for an incredibly clean experience on the palate. Effortless and ethereal are two words that come to mind.

Food Pairing:
With a sake this delicate, it is easy to overwhelm it with strong flavors. I recommend it either sipped on its own, or paired with light dishes such as seaweed salad or cold tofu with ginger and soy sauce.

This wine is available for purchase on the internet. It is imported by Chambers and Chambers in San Francisco.