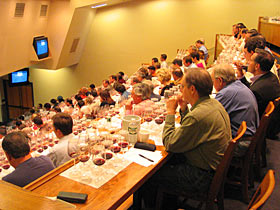 Earlier today, Robert M. Parker, Jr. sat in front of a sell-out audience of 100 at the Culinary Institute of America for a seminar entitled “Pinot Noir and Burgundy….Blind.” This was the third in a series of annual tasting seminars held at the CIA’s Greystone Castle in St. Helena, CA as fundraisers for the scholarship fund of the Rudd Center for Professional Wine Studies at the CIA. Past seminars have focused first on Syrah, and then on Grenache, but none of them had the format that was tried today.

For today’s tasting Parker selected 6 French Burgundies and 5 California Pinot Noirs for tasting, and threw in a ringer from his own cellars. The goal of the tasting, apart from having some fun, was to explore the differences and growing similarities between the two regions, as well as see what might happen in a blind match up (yes this is the second posting today about a French and California comparative tasting — I really am a lot less interested in this sort of competition than the recent frequency of posts might suggest).

I couldn’t afford the $500 tasting fee for this event, and no press passes were issued, but I did get the opportunity to hang out in the back of the theatre and observe the session, which was a lot of fun. Parker was his usual genial self, and even more self-deprecating than usual, starting the whole event with “I was going to spend a few minutes here at the beginning talking about what I know about Burgundy, but then I realized I couldn’t get past one or two sentences, so I’m giving up on that.” He poked fun at himself quite a few times in the tasting, acknowledging that a lot of people contend he doesn’t know what he’s talking about when it comes to the region.

But he went on to profess a love of great Pinot Noir no matter where it is made, and praised the advances made in both Burgundy and California. He went on to say “When I started all this in 1978, never in my wildest dreams did I imagine that California would be making the quality of Pinot Noir it has been producing for the past decade. The emergence of world class Pinot Noir growing regions around California truly is one of the greatest wine stories in the last fifty or so years.”

The tasting began and proceed interactively, “without video taping” said Parker, “so just like Vegas, what happens here, stays here.”

Throughout the tasting Parker and co-moderator Karen MacNeil fielded questions from the audience and discussion of topics such as destemming, alcohol levels, brettanomyces, and in a very interesting question from MacNeil, whether Bob felt any pressure in a blind tasting to be right. His response (in jest)? “Well, Karen, having done this for 27 years and having been right the rest of the time….” Everyone laughed and he went on to say that he didn’t feel much pressure, and besides, no one thought he knew anything about Burgundy to begin with.

To his credit, when the wines were revealed at the end of the tasting, Parker correctly identified the provenance of the wines with generally far more accuracy than the crowd at large. Ironically, everyone’s favorite wine at the tasting, including Parker’s, he pegged as French while the crowd (correctly) thought it was Californian.

Blind identification of wine, at the end of the day, isn’t easy.

And what was the crowd favorite wine by clear decision? A 2004 ROAR “Garys’ Vineyard” Pinot Noir from the Santa Lucia Highlands. The cheapest wine at the tasting by a long shot !

Here’s the lineup and what the crowd guessed as to their country of origin (click on any wine to purchase online).

3. 2003 Momessin “Clos de Tart,” Morey-Saint-Denis, Burgundy. $180
The crowd was divided on this one, though a majority thought it was Californian. Parker guessed French.

5. 2002 Domaine de la Romanee-Conti Grands Echezeaux, Vosne-Romanee. $500
Picked by parker as the most disappointing wine of the group, echoed by many others. Most of the crowd picked it as French.

6. 2004 ROAR “Garys’ Vineyard” Pinot Noir, Santa Lucia Highlands. $50
The clear favorite of the group by a factor of three. Most people thought it was Californian. Parker thought it was French, and it was his favorite wine of the tasting.

7. 2002 Domaine G. Roumier “Bonnes-Mares,” Chambolle Musigny. $85
Nearly everyone thought this was a California wine. Parker called it as French.

8. 2003 Williams Selyem Pinot Noir, Russian River Valley. $67
Most everyone guessed this was from California, and it was a distant second favorite of the crowd.

10. 2001 Domaine Grand Veneur Chateauneuf-du-Pape “Les Origines,” Rhone Valley (The RINGER). $60
Pretty much everyone was able to spot this as the ringer, and several people correctly guessed it was Grenache.

11. 2004 Brewer-Clifton “Mount Carmel” Pinot Noir, Santa Rita Hills. $100
Everyone thought this was a French wine, including Parker, who said it had a classic Burgundy forest floor quality to it. This was Parker’s second favorite wine of the tasting.

Blind identification is a tough business, but there’s no mistaking that California is producing some world class Pinot Noir.

No word yet on what next year’s seminar is going to be….