The Masters of Wine on the Auction Block: Oct. 28 and Nov 1 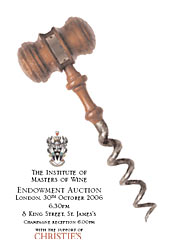 No, this is not an opportunity to purchase a MW degree like those $99 diplomas advertisements you keep deleting out of your e-mail box. It is however, a somewhat unusual wine auction that offers some interesting surprises.

Wine auctions for charity are big these days. The battling 800 pound gorillas of the game are Auction Napa Valley and the Naples (Florida) Wine Auction. These two, along with other auctions in Sonoma and elsewhere continually outdo each other with raising astronomical sums for their designated charities by auctioning off fabulous packages of wine, travel, celebrity encounters, cars, jets, and more. Mostly they are star-studded events with lots of fanfare.

The Institute of the Masters of Wine auctions that are coming up in London and in New York are going to be a bit different, if only because they are being held by the venerable Christie’s auction house. I guarantee it will not be hosted by Robin Williams. Perhaps another key difference is that the charity, in this case, is the Institute for the Masters of Wine itself, which as been run as a non-profit organization since its inception. For years the Institute, which provides what most people acknowledge is the most rigorous and prestigious certification for wine professionals in the world, has funded itself through member dues, donations, and the fees associated with the courses and tests required for certification.

The IMW organization has recently decided that it needs to change two things. It wants to become more broadly involved with the wine drinking public and it wants to create an endowment to help subsidize the costs of its education and other activities to help it deepen its participation in the wine loving world at large.

To that end, it has convinced Christie’s to host a couple of auctions for the organization, in which various Masters of Wine from around the world have donated bottles from their cellars, time to conduct classes and tours, and connections for exclusive trips and winery visits. All in all yielding an impressive group of auction lots to be bid on in both New York and London.

Some of the highlights include a trip to Germany to taste through 5 decades of Egon Muller Rieslings, a double magnum of 2000 Chateau Lafite Rothschild, a bottle of 1966 Romanee Conti, a 10 day wine trip in New Zealand, and more. As an added bonus, since Christie’s is doing this as a pro-bono auction, successful bidders will not have to pay the usual buyer’s premium (20% on top of the winning bid).

So for those who usually perk up their ears about such auctions, this is one that may be low on glitz and high on value. Anyone in the US can bid by fax or by absentee ballot for the New York Auction.

Here are the auction catalogues in PDF form (London and New York) for your perusal.

Institute for the Masters of Wine Endowment Auction

Each auction begins with a Champagne reception. The bidding begins one half hour later. Attendance in person is free, though bidders must register in advance or bid by absentee ballot, which is included in the auction catalogs above.