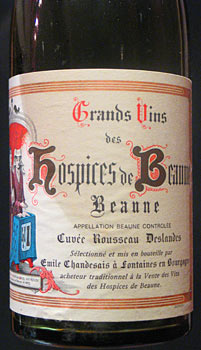 I will never be able to taste all the wines out there, no matter how hard I try, just as I’ll never be able to travel to all the places I want to go in the world. Wine offers a landscape of exploration seemingly as varied as the world around us, and just as likely to offer up surprises and treasures to those who are intent enough, or lucky enough, to find them.

Great wines sometimes just sneak up on you. They are like precious gems, or veins of gold. Many of the main sources are well known and consistently producing. But a prospector or explorer can sometimes discover great riches by poking about in old dusty corners of the world that many have dismissed or just never bothered to look at closely.

Discoveries of this kind are all that more precious for their serendipity. I never would have guessed a few bottles of 1961 Burgundy bottled for a negociant producer better known for Beaujolais than anything else would so clearly reveal one of the most magical aspects of wine to me.

This wine is made from grapes from premiere cru vineyards in the Côte de Beaune, owned by or leased to the Hospices de Beaune, a charitable organization in the town of Beaune that produces a set of wines under its own name each year and then auctions them off for charity. I don’t know who the winemaker for this organization was in 1961, but whomever he was, he made this wine named for the Rousseau-Deslandes family, who founded the namesake of this charitable organization, the Hospice de la Charité in Beaune. This hospital, now a museum, has for the last three centuries tended the sick and the poor of the region.

As the label indicates, the person who bought this auction lot, and eventually brought it to market was Emile Chandesais, a simple negociant based in Fontaines who typically purchased wine made from the various cooperatives around northern Burgundy and bottled it for sale under his name.

It’s difficult to ascertain, but apparently Maison Emile Chandesais is still around and continues to make relatively modest Burgundies and a large quantity of Beaujolais Nouveau each year. Perhaps his one brush with fame might be that according to some, Emile Chandesais may have been the first producer to actually bottle Beaujolais Nouveau and market it as such. He will forever have to fight Georges Deboeuf for that title.

Because I know so little about this wine, you need to think of this less as a wine review and more of a meditation.

More rewarding, but no less compelling than the ancient alchemist’s quest for transubstantiation, wine offers a tangible way for us to experience aspects of the world we hardly understand. Modern scientists are barely beginning to explore the complexities of how it is that grape juice can transform to taste of raspberries or chocolate or licorice, let alone understand how a simple wine like the one in this bottle can become something altogether different than it was, like a chrysalis unfolding after its sleep — the three dollar bottle that is now a jaw-dropping, whiplash-inducing, radiant nectar of a wine.

I cannot pretend that this simple, yet not-so-simple-bottle is the best wine I have ever had in my life. It is not the one bottle to rule them all — I don’t play at Best Of or Top 100 lists with wine. But it does represent the depth of profundity that I understand can exist in wine. It tastes of the pure, uncut passion that is my lifeblood as a wine drinker.

Yes, I love this wine. I cannot even bear to write “loved” in past tense because I can still taste it, four days later. I am somehow holding it in my mind’s eye (as strange as that sounds) turning it over and over like a bright piece of glass picked up in the beach.

But one man’s treasure is another’s trash. I know at least one person who tasted this exact wine, on the same pre-auction wine tasting that evening I first did, and pronounced it unremarkable. But isn’t that just like life?

The best wines can only be shared like our favorite books. With some friends, the mention of the title alone is enough to elicit knowing sighs of satisfaction and camaraderie. With others, we get indifference or disdain. But the treasure remains in either case, intensely personal at its core.

Wines like this make up for every lousy bottle we drink on the journey to something better.

Tasting Notes:
Light, blood-red in the glass, this wine has a nose that makes me want to take off all my clothes and leap screaming into a New York subway car like some sort of raving, modern-day prophet. How is it that a wine can smell this good? An amazing perfume wafts from the glass with a gorgeous, vanilla-caramel aspect that befits its age, and an altogether astonishing red, tropical fruit character of youth that ends up more floral (don’t ask me what kind of flowers) than fruity in my final assessment. In the mouth it has (unbelievably) incredible acid balance, perfect poise, and a texture that reinforces the earlier decision to get buck naked with this wine just based on its aroma.

Seriously. I’d kick Angelina Jolie out of my bed to drink it.

Redcurrant, raspberry, a garrigue-like medley of fresh herbs, and exotic spices mark a few of the high points in the aria this wine sings as it moves down the tongue. Its finish is a ninety-second, soprano-belted high-note that seems like it SHOULD break the glass, it is so clear and pure. There aren’t enough good expletives available to say how awesome this wine is. I only wish I knew where to find some of it. I’ll have to settle for never pissing off the friend I know who bought the few bottles I know to exist in the futile hopes that I might be around one day when he opens another.

Food Pairing:
With a wine this good, the food pairing shouldn’t be geared to match the wine, it should be engineered to showcase it. It’s all about the wine, which is why a simple leg of duck confit — no fancy dressing, sauce or anything of the sort might be the perfect match. Savory, a little salty, and a little fatty — a perfect foil for the wine.

This wine is not really available anywhere. I’m sorry. You don’t know how sorry I am. Just thinking about that fact makes me want to crawl into bed and whimper. And if you did buy some who knows if it would be anywhere nearly as good?