Winemaking can be a nerve-wracking business. A lot of things can go wrong in the fermentation process, strange things happen in barrel sometimes, and there’s always a bit of nervousness when the wine goes into the bottle and suffers a condition known as “bottle shock” where it usually tastes lousy for several weeks to several months until it settles down in its new home.

But perhaps the most nerve-wracking aspect of winemaking for most winemakers, one that can never be completely erased no matter how many years of experience they possess, is the day and time of picking. A lot of things hang in the balance just before harvest. Will there be rain? Will the grapes be too ripe? Not ripe enough? Will rot set in? Will the birds get them? It’s sometimes a fingernail biting exercise of the ultimate degree for winemakers of normal wines. For those who are trying to make traditional ice wine, it’s much worse.

Today is Wine Blogging Wednesday #27 and all over the web, bloggers will be reviewing ice wines.

Waiting for grapes to ripen is risky enough, with all the hazards and issues described above. But he longer the grapes remain on the vine the greater the risk they will fall prey to any of the number of disasters that turn ideal grapes into compost. Winemakers who are committed to making real ice wine must wait longer than any other winemaker, and with more vigilance, only to eke out a small amount of precious wine each year.

Ice wine, when made the traditional way, comes from super ripe grapes that have literally frozen on the vine, usually as the result of the first major frost or snowstorm of the season. Only at temperatures below 19 F/ -7 C, while their water content remains frozen, these grapes are pressed, yielding a highly concentrated super-sweet nectar in minute amounts that is then made into wine.

Ice wine makers have all the concerns and waiting game of normal winemakers, plus the finger drumming, 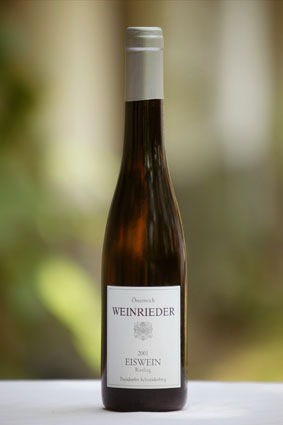 Friedrich “Fritz” Rieder and his entire family have played that waiting game for decades. So often in fact that pretty much everyone in their Weinviertel region of Austria refers to them as the Weinrieders. Which is pretty handy, since that’s the name they’ve chosen to put on their bottles.

The Weinrieder estate is located in the town of Kleinhadersdorf, smack dab in the middle of Austria’s largest wine producing region which is best known for its sparkling wine and racy Gruner Veltliners. The Weinrieders (comprised of Fritz, his wife Melanie, and their three sons) have been making wine since the late Seventies.

The estate produces mostly Gruner Veltliner and Riesling, with small amounts of Chardonnay from several famous vineyards such as Birthal, Kugler, Schneiderberg, Hohenleiten, and Bockgaerten in the Weinviertel appellation. The estate owns about 30 acres of prime south and southwest exposure vineyards scattered to the west of Poysdorf, one of the prominent centers of winemaking in the Weinviertel since 1194.

Weinrieder has become well known for both its dry whites as well as dessert wines, including several rare wines that few other producers make: a red ice wine (from what varietal I do not know) and a passito style dessert wine known as Strohwein where grapes are left to dry on straw mats before pressing.

This is their flagship estate ice wine that comes from the Schneiderberg vineyard just outside of Poysdorf. It is made from 100% Riesling grapes that have been harvested in the near darkness of early morning after the first frost. Provided everything goes according to plan, the few acres reserved for ice wine in this vineyard will yield enough juice for 3000 half-bottles each year. The grapes are carefully hand harvested (with gloves on, both to protect the hands and to protect the grapes from the heat of naked skin) and then lightly pressed in a pneumatic press. The resulting juice ferments in simple steel tanks and after fermentation goes as far as it can, the resulting juice is gravity fed into small old oak barrels where it ages for several years before release.

Tasting Notes:
Medium orange-gold in color and clearly headed towards a beautiful amber hue with more time, this wine has an alluring nose of candied orange peel, mango and other tropical fruits, with the beginnings of a more characteristic petrol scent emerging as the wine is first poured. In the mouth it is thick and luscious, voluminous even as it slides off the tongue towards the sides of the mouth and the back of the throat. Well balanced, with flavors of apricot, canned peaches, and fresh honey, the wine also has a pineapple-like acidity that tightens the cheeks and exposes some nice mineral flavors as the wine finishes languorously. Excellent.

Food Pairing:
When I have a dessert wine with great acidity like this, I always want to pair it with something sumptuous and creamy. For this wine I might choose a simple dessert of fresh crepes filled with pastry cream with a little citrus zest .

This wine is available for purchase on the Internet. Weinrieder is imported by the Blue Danube Wine Company in Los Altos, California.