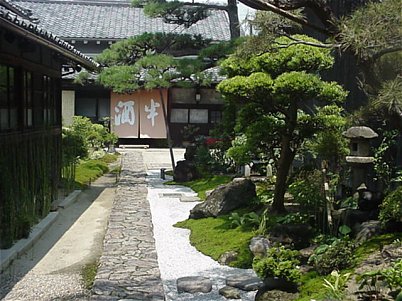 I’m a sucker for a good story when it comes to what I’m drinking. Of course, what I’m drinking has to be good, but it becomes so much better for the addition of a great story about where it came from and how it was made. Quite often, however, the story also comes from who made it. The people behind the wine we drink are literally the reason it tastes so good, but the stories of winemakers, vineyard workers, winemaking families, and vineyard owners can add a special dimension to the understanding and appreciation of what’s in the glass.

Especially when the folks who make what we’re drinking defy the odds.

Philip Harper is a man going where none of his kind have gone before. Specifically, he is the first and only Toji, or master brewer of Japanese sake, that also happens to be not Japanese. Harper is the sort of modest unassuming Brit that still hasn’t gotten used to answering the question that everybody always asks. His answer to how the heck he ended up where he is today is “purely by accident.”

What started as a personal passion for sake led to volunteering for the backbreaking work associated with the sake making process, eventually getting paid for it, and then, after a long road of apprenticeship, being certified as the first foreign-born Master Brewer in the country. The author of several books about sake, Harper recently published The Book of Sake: A Connoisseurs Guide

, which is a handy combination of instruction, history, and recommendations for those interested in exploring the higher-quality realms of sake.

Harper works for a brewing company called Daimon Shuzo (the shuzo just means “brewery”) near the city of Osaka in western Japan. Confusingly, the brewery is also known as Sakahan Shuzo. Don’t ask me why.

Founded in 1826, Daimon has been run by a single family for 6 generations. The brewery sits at the foot of the Ikoma mountain range in a town called Katano city, an area that has been renown for centuries as a destination for viewing the cherry blossoms and other seasonal scenery.

Sake production in the area began in the Edo Period (between 1600 and 1850) and Diamon is one of only two remaining brewers that have survived since that time. Its longevity can certainly be attributed to making a great product and sensible management, but may also be a consequence of the brewery’s modest aspirations. Diamon has never made much sake. It produces about 90,000 liters of sake per year (the equivalent of 10,000 cases of wine), which makes it rather small by Japanese standards.

Harper works alongside another Master Brewer named Yokomichi Toshiaki to produce the brewery’s various different sakes for domestic and export markets. Most sake breweries have a large portfolio of different sakes that are made in various quantities, some large, some miniscule. I’ve never seen a sake brewery that didn’t have at least several different products and several different sub-brands. Diamon offers its products under the Diamon, Tozai, Mukune, Sakahan and Rikyubai.

The Tozai line of products, both of which are reviewed below, is a special collaborative project between Harper, the brewery’s US importer, and artist Daniel Kelly, who provided the artwork for the labels. The name Tozai appropriately means “East-West.”

The existence of these products, not to mention the employment of a British guy with wild curly hair and a penchant for wearing hooded sweatshirts and tie-dyes, totally impresses me. It’s quite inspiring to see even just a single example of such innovation and open-mindedness in an industry whose complex traditions and convoluted laws make the French AOC system look like kindergarten playground rules.

Below you’ll find tasting notes for the four sakes that the brewery currently exports to the US. Full disclosure: I received these sakes as press samples.

Tozai “Well of Wisdom” Honzojo
Colorless in the glass, this sake has a yeasty nose of wet wood and malted milk. In the mouth it is silky, with subdued acid levels and somewhat straightforward flavors of chocolate milk and cedar. Score: 8. Cost: $22. Where to Buy?

Mukune “Shadows of Katano” Junmai Ginjo Nigori
Cloudy white with a fine sediment and just the tiniest hint of bubbles, this sake has a very unique nose that has the lightest yeasty notes of Vegemite mixed with more dominant aromas of freshly baked bread, and sweet wet earth. In the mouth it is lightly sweet, with a nice satiny feel on the tongue, and can best be described as tasting like what you might imagine milkweed to taste like before you actually give it a try (the real deal is somewhat bitter). There is something magically organic and essential about the milky earthy flavor and its accompanying notes of floral tones. This is the first Junmai Ginjo Nigori (unfiltered) sake I have had, but it has me itching for more. Score: 9. Cost: $40. Where to Buy?

Mukune “Root of Innocence” Junmai Ginjo
Crystal clear in the glass, this sake has a very light, nearly imperceptible nose of light rainwater and mineral aromas with a hint of floral complexity. In the mouth it has a somewhat unusual combination of woody flavors and a richer butterscotch aspect that is quite pleasing. The sake is very balanced with a fine texture and weight on the tongue. A solid Ginjo that most people would have to try very hard to dislike. Score: 9. Cost: $40. Where to Buy?

Tozai “Voices in the Mist” Nigori
Dense and milky white in the glass, this unfiltered sake smells classically of warm bread. In the mouth it is lighter than its thick cloudiness would suggest, and has a surprising peachy and citrus aspect to it, hinting at oranges at times as it moves across the palate, with only a tiny bit of sweetness to it. This is a more classic nigori-style sake, uncomplicated and approachable. Score: 8.5. Cost: $22. Where to Buy?