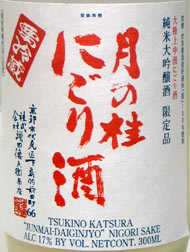 Little kids go through a phase where they need to put everything in their mouth. I wonder what it says about me that I’m pretty much stuck there? I really enjoy trying out new wines and sakes, especially those that are well off the beaten path.

So when Beau Timkin, the owner of True Sake in San Francisco handed me this bottle and said “check this out” I couldn’t resist. After all, it was the sake equivalent of….well…..(if you’ll excuse what may be a somewhat obscure (to you) Japanese animation reference) Howl’s Moving Castle.

2. Junmai Daiginjo — the highest grade of sake, where the rice kernels have been polished to less than 55% of their original volume.

3. Nama sake — unpastuerized, designed to be drunk very soon after production, much like Beaujolais

Can you understand my fascination? Even if you’ve never seen the phantasmagorical animation movie referenced above perhaps you can understand what a strange beast this sake would be.

Many people who enjoy sake even occasionally are familiar with the cloudy nigori sakes, as they are somewhat trendy and likely to be offered in most sushi restaurants that aspire to have anything more than just the standard hot sake on the menu. Nigori sakes are cloudy because minute rice particles (think flour particles) that are normally filtered out of the sake are left in. These bits of starch both make the sake milky white, as well as add a slight sweetness to the liquid because they contain sugars.

Most nigori sakes are considered to be somewhat rustic, harkening back to the beginnings of sake when, in fact, all sake was nigori sake, since no one bothered to (or had the technology to) filter it in the early days of sake brewing. Consequently nigori sakes do not tend to be premium sakes, which is to say that they are most often made from rice that has not been polished to the level required for premium sake.

So to see a Junmai Daiginjo nigori sake is quite unusual, both because it means that the brewer has gone to quite an expense to deliberately produce such a sake, and that the brewer is confident that such a sake merits such treatment, as the rice sediments that are left in nigori sake tend, on the whole, to mask some of the more delicate flavors and aromas that a junmai daiginjo sake has been made to possess.

Nama sake or namazake is the sake world’s equivalent of Beaujolais Nouveau, or perhaps more accurately, fresh raw milk, which is unfortunately illegal in the US. Unpastuerized by heat, namazake has a different character that is cherished by die-hard sake fans as more rustic and “authentic” than commercial releases that go through the pasteurization and stabilization process.

And sparkling sake? Well, what can I say. Sparkling sake is just a oddball phenomenon. It has been made here and there by various producers over the last decade, but not with any regularity, nor with any real commercial strategy. It is perhaps best characterized as one big experiment.

If there is any brewery that isn’t afraid of experimenting, it’s the Tsuki no Katsura brewery in the Fushimi district of Kyoto in western Japan. One of the oldest and most regal of breweries in the area, it is single-handedly responsible for the fact that nigori sake even exists today as a commercial product.

As I mentioned, originally all sake was effectively nigori, as it went unfiltered. But sometime before the 19th century, many makers began to press their sake through mesh bags to filter out the sediment. When the “rules” for how to make sake were written in the 1800’s and it became regulated by the government, filtering (or more accurately, pressing, as there is most often a final filtration after pressing) became part of the required regimen, and nigori sake effectively became illegal. One of the primary reasons for this was that the filtering process was when the government levied its taxes on sake makers. For perhaps understandable reasons, the government wasn’t too keen on the idea of skipping that step for aesthetic reasons.

But nigori sake wasn’t forgotten, and after decades of tireless lobbying, Tsuki no Katsura managed to convince the government to allow them to make nigori sake. How did they manage to get around at least two hundred years of precedent for pressing sake through a filter to remove solids? Well, in the end they didn’t. They were still forced to filter their sake, but they convinced the government to let them use a filter that had holes in it about the size of golf balls. Apparently it took a couple of years of changing their production process so the government ministry that oversees sake brewing would approve, but eventually they did, paving the way for all modern nigori sake.

Today, Tsuki no Katsura is one of the largest producers of nigori sake in Japan, and is apparently breaking new ground by moving into the sparkling sake world as well. They also produce a range of standard sakes which are rumored to be decent as well.

Full disclosure: I received this sake as a press sample.

Tasting Notes:
Cloudy white to the point of being chunky, with a medium-strong effervescence, this sake has a yeasty nose with scents of bubblegum and malted milk. In the mouth it has a thick presence on the palate and about as much carbonation as some soft drinks. The flavors are cool and rainy, with a distinct flavor of wet paper, a light floral element, and a finish that is beer like with hints of yeast. I’m not sure if my sense of the beer-like flavor was influenced by the carbonation or not. Overall this is not a sake that does a lot for me, but it was a fascinating drinking experience and one worth trying just on principle, especially for those who are interested in sake.

Food Pairing:
Nigori sakes normally reward pairings with slightly more substantial foods than their lighter, more delicate filtered brethren. I’m not confident about it, but I might try pairing this sake with tonkatsu, the traditional breaded and fried Japanese pork cutlet.