What is That Darn Flavor? 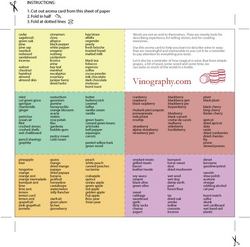 Over the last couple of years, I’ve been helping my friend Leigh learn a little more about wine and develop his palate. Leigh’s developing a decent palate but he’s still less than confident about his tastes. Which is odd for a cheeky Brit who’s never short on opinions. The combination has led to some amusing moments.

A few weeks ago, Leigh sent me an e-mail:

I’ve had enough of this wine review crap ! What is the difference in flavor between a Blackberry, Huckleberry, Boysenberry, Blueberry, Bilberry etc. I can just about believe that raspberry and strawberry have distinctive flavors but all these others! Come on? I’ve never even seen a Huckleberry how am I supposed to know what it tastes like ?


As a blossoming wine lover, Leigh is not alone. To the average layperson the adjectives used in wine reviews can provoke everything from hysteria to disbelief. I clipped the following letter to the editor of Business Week shortly after I got Leigh’s e-mail. In it, a reader is reacting to one of Robert Parker’s weekly columns in the magazine where he frequently reviews wines:

THE MYSTERY OF TASTE
As you probably know, our taste buds only transmit five flavor sensations: bitter, sweet, salty, sour, and the mysterious flavor: umami, which can most easily be described as “savory.” Any more complex flavor, even something as simple as the taste of an apple, is actually mostly aroma. No one knows exactly how many different unique aroma compounds we are capable of perceiving, but lucky for us the number is likely in the tens of millions. I say “lucky” because without this amazing spectrum of aromatic perception, our lives would be pretty dull, especially when it comes to food and drink.

One of the most essential skills for wine lovers, newbies through experts alike, is the honing of our ability to identify flavors in wine. The practice of paying attention to wine and identifying what it tastes and smells like serves both practical as well as pleasurable purposes. At the beginning of a wine lover’s explorations in wine, paying attention to the flavors and aromas of wine forms a framework of experience that eventually leads to preference. The only way to figure out what you like is to try a lot of stuff, and remember what it tastes like.

THE SKILL OF TASTE
Beyond the initial ability to appreciate the spiciness of certain Zinfandels or the cat pee in Sauvignon Blanc, a skill at identifying aromas can help wine enthusiasts steer clear of corked, oxidized, or otherwise flawed wine. Our senses are the only things that stand between us and a ruined meal at the hands of a spoiled wine.

Of course, to some of us, identifying the flavors and aromas in wine is an immensely pleasurable experience on its own. Part game, part mental acrobatics, trying to access our sense memories and compare them to what we are tasting can be as pleasant as reminiscing about favorite moments from childhood.

To those unpracticed in such activity, like my friend Leigh, it can be a difficult or even seemingly impossible task. And when someone easily rolls off a few descriptors for a wine, it’s easy to think, “come on, does he REALLY taste all those things?”

The answer, Leigh, is yes. Just because you’ve never tasted a huckleberry before doesn’t mean that no one has, and the ability to recall and identify that flavor is a skill no different from remembering what all those vegetables you see at the grocery store are called. Like any skill, flavor recognition takes practice, but anyone can do it, even if they are among the 25 percent of the population that are considered “nontasters”

Lucky for us, practicing tasting proves to be a lot easier and more pleasurable than practicing yoga. At its most essential, practicing the skill of tasting requires no more than simply paying attention. I’ve gotten into the habit of simply always taking a moment as I eat to say to myself, “Oh, so this is what _______ tastes like. Remember this” Whether that’s the most common of apples, or the pineapple guava that I tried yesterday for the first time.

THE ORANGE ICE CREAM TEST
Paying attention to our taste and smell sensations, though, is not the same as swirling some wine in a glass and our mouths and being able to pick out aromas with acuity. There’s something strangely difficult about putting words to flavors. My favorite proof of this is my Orange Ice Cream Test. I live a few blocks from Mitchell’s Ice Cream in San Francisco, where they make peach, mango, and cantaloupe ice cream, among other flavors that all share the same shade of orange. Ask anyone whether they feel like they know what each of these basic fruits taste like, and they’re likely to be certain they could identify them, but most folks faced with three scoops of ice cream of the same color can usually only tell that they are each a different flavor, but not much more than that.

Strangely though, if I write down the names of the three flavors on a piece of paper, most people can instantly identify which is which. The ability of most people to recognize a flavor with a little help is much, much stronger than blindly struggling for words.

This is why whenever anyone asks me how to improve their skill as a wine taster I always suggest three simple things: taste a lot more wine, take notes, and use an aroma wheel.

THE AROMA WHEEL
Some readers may be surprised to know that there a whole branch of wine science focusing exclusively on flavors and aromas in wine. Pioneered and codified by Dr. Ann Noble at the University of California at Davis, modern sensory analysis is based on a large system of scientifically derived flavors and aromas that Dr. Noble assembled into a framework known as the Aroma Wheel.

This circular diagram lays out the hundreds of major aromas found in wine, grouping them in sections that relate both to their common occurrence together as well as their common chemical origins.

In addition to the original wheel developed at UC Davis, countless other wheels have been developed. Some for specific grape varietals, others for specific regions, and still others that are just variations on the original.

I’ve always wondered one thing, though. Why the hell is it always a wheel!?

In general I find that round shape to be the most impractical of shapes for its purpose. There seems to be no real meaning to the circular relationship between one thing or another (why are the berry flavors next clockwise after the spices?) nor are there any additional understandings to be gained by various flavors being opposite each other on the wheel.

THE VINOGRAPHY SOLUTION
So, in the interest of helping my readers build their skill at identifying wine aromas, I’ve decided to fix the aroma wheel, and turn it into the free Vinography Aroma Card — a handy business-card-sized tasting tool that you can carry in your wallet and use any time you want to do a little hard core wine tasting. You can download it as a PDF and print it on your color or black and white printer at home.

So there you have it. Down with the wheel. Long live the wallet card. Just whip this little baby out anytime — whether you’re sitting there with your eyes crossed in concentration thinking “I KNOW I’ve tasted something like this before, but I just can’t put my finger on it” or whether you’re making a serious attempt to become a better taster by making detailed notes about the wines you’re drinking.

And when you’re ready to take it to the next level, there’s a whole other world of words for wine out there waiting for you.