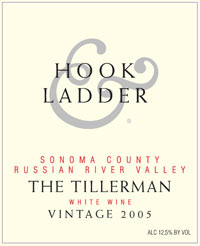 Old winemakers don’t die, they just start another label. I’ve never seen this bumper sticker on any old pickup truck in Napa valley, but in addition to being cute, it’s certainly a truism if I’ve ever heard one. While making wine is tough work, the better you get, the more you’ve got other folks who can do the heavy lifting for you while you make the critical decisions that ultimately determine the nature of the wine that is produced. That’s why it’s possible for us to have the cliché of the crusty old winemaker, still tottering around through the vineyards at ninety, and still making great wine with the help of three generations below them. Those folks really do exist

Of course, many of them exist in the old world. These days in the United States, if you’ve got a family that has been making wine for fifty years, chances are, you’ve hit the big time. Think of the family names that we know in California wine: Gallo, Jackson, Trinchero, De Loach, Beringer, Mondavi. You get the picture. What is interesting, however is that there comes a certain point, it seems, where the founders of these brands reach the top of their game and find out, like Alexander the Great, that there are no more worlds to conquer.

In any other industry, this is when executives retire to a life of golf and participation on corporate boards of directors. But not so in the wine industry. The folks who happened to turn their passion into phenomenal successes, seem to have no less passion after decades in the business. Which is why many of them seem to do exactly what Cecil De Loach did after building a multi-million dollar wine brand over the last 30 years.

They start all over again.

To the average American wine consumer De Loach is most certainly a household name by now. Started in 1970 by Cecil, a San Francisco Fire Fighter, and his wife Christine, De Loach grew into what can only be called the Sonoma Juggernaut. I have no idea how many millions of bottles Americans have consumed to date, but I’m sure the number is staggeringly huge. The rise of the label is certainly one of those success stories that continue to attract people to the wine business.

After thirty years, however, the De Loaches found themselves at the head of a large corporation, which, it seems, is not exactly the place that most winemakers want to be for the rest of their lives. So they did what increasingly many are doing — they sold the company in 2003 and went back to making wine the same way they did at the very beginning.

And so Hook and Ladder winery was born. Of course, instead of the tiny, twenty-acre plot in the Russian River Valley that began De Loach vineyards, Hook and Ladder has its choice of 375 acres of prime Sonoma grapes. These vineyards make up only one third of the nearly 900 acres that Cecil De Loach has personally farmed in the area over the last three decades.

While the acreage may be bigger, the winery is not much larger than their first venture in its early years. De Loach is the owner and winemaker, assisted by his wife and two children. His daughter Sarah runs marketing for the winery, while his son Michael is part owner and shares operational responsibility with his father.

The winery produces five reds, four whites, and two pink wines, including a white zinfandel, one of the wines which was instrumental in the success of the original De Loach brand.

This wine is a proprietary (that is, secret) blend of three different white varietals that purportedly was conceived one night back when Cecil was still working as a fireman in San Francisco and commuting up to Sonoma County on his days off. Apparently a false alarm at Station 10 led to some late night conversation (and wine drinking?) and planted the seeds for this blend of what I am guessing is Viognier, Chardonnay, and Pinot Gris or Sauvignon Blanc. Most of the grapes come from area of the Russian River Valley between Olivet Lane and Piner Road.

The grapes for the wine were cold fermented in stainless steel, resulting in a fresh, bright wine with no traces of oak. 2500 cases are produced.

Tasting Notes:
Pale straw in color, this wine has a lovely semi-tropical nose of peach and guava aromas mixed with a nice gritty minerality. In the mouth it is pleasingly fresh and light, and perfectly bone dry. Good acids and a silky body, combined with flavors of tart apples and pears make for a pleasant and unique flavor profile for a Russian River white wine. The wine finishes with nice citrus (grapefruit?) notes in the back of the throat. It almost sounds like a backhanded compliment to suggest this is a wonderful “all purpose” white wine, but honestly, it’s a perfect candidate for the standard house white.

Food Pairing:
Low alcohol and great acidity make this a slam dunk for nearly everything except meats. Why not try it with this crab and herb fettuccine?

The 2005 is currently tough to find on the Internet, but previous vintages are available.