New Zealand’s Central Otago wine region, as is common with many “newer” wine regions in their early stages of development, is actually several distinct regions in one. The first view of the region, and the first of the smaller distinct areas that most travelers encounter is the stunning landscape of the Gibbston Valley.

The thing about Gibbston valley, though, is that there isn’t much valley there. Squeezed between the narrow, often sheer rocky walls of a canyon, and the deep gorge of the Kawarau river, there are only a few places where there is much valley floor to speak of. On these sloping alluvial shelves (which often end at a 40 meter plunge straight down to the river) a group of New Zealand winegrowers continue what can only be described as a persevering tradition of farming that began with the first (desperate, I imagine) settlers in this stark and sometimes brutal landscape.

Before I even knew where it led, I wanted to drive down the road that leads to Chard Farm Winery, mostly because it looked improbably dangerous and equally spectacular. Call it the coolest vineyard driveway in the world. Direct proof of the precarious life that the earliest European farmers and settlers of this valley led, the road to Chard Farm literally hangs off the face of a cliff. Following the narrow track of an old carriage road established over 100 years ago, this road, in some places a mere ten or twelve feet wide, skirts the edge of a huge rocky bluff that plunges 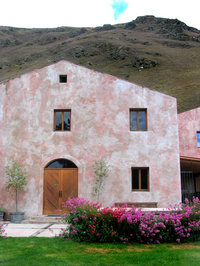 hundreds of feet straight down to the roiling turquoise waters of the Kawarau. From the modern highway on the opposite side of the river, the road looks impossible — as if it had just been glued on to the side of the mountain face. On the road itself, especially thinking of rickety wooden carriages drawn by horseback a century earlier, it merely seems insane.

Of course, it takes a certain breed of insanity to struggle through the years to eke out a living as a farmer on a few precious acres of powdered stone pinched between a roaring river below and snowy peaks above, so perhaps the road to Chard Farm fits right in to a universe where everyone is focused on coaxing an existence out of rocks and rain. But such are the extremes that grape growers often seek for their vines, so it’s not surprising, in the end, that if anything would grow in the shallow talus and alluvium of schist and serpentine, it would be vineyards, and in particular, the stubborn and masochistic vines of Pinot Noir among other varietals.

As might be expected from a road like that, Chard Farm as a place is no stranger to hardship. The history of the farm began when Englishman Richard Chard was lured from Dorset, England to the area in the gold rush of 1862. Arriving to work the gold fields at the age of 14, he eventually scraped together enough money to buy a one-acre strip of land on this small shelf above the river, and began to eke out an existence as a farmer, quickly realizing he 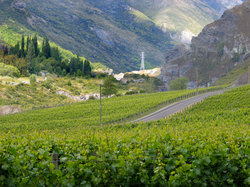 could make a more viable living selling food to the miners than being one himself. Over the years the farm grew to its current size of 50 acres, and Richard eventually married and had children, to the youngest of whom he left the property on his death in 1905. Richard’s son Fred worked the farm with his wife for more than 75 years, eventually moving away and leaving it in the hands of his son Eric, who sold it in 1987 to its current owners, Robert and Greg Hay.

The winery’s first vintage was in 1993 under the direction of Rob Hay, whose three years studying winemaking in Germany was both the guiding force behind the purchase of the farm and continues to be the expertise behind its operations and winemaking. Robs wife Gerda manages the business side of the winery.

I stopped by last week and tasted through everything they had open, which included (I so rarely get lucky) their single vineyard designate Pinots, which are not normally available in the tasting room. Both 2004 and 2005 were difficult vintages in Central Otago, but you wouldn’t necessarily know it from these wines, which are very strong indeed.

2006 Chard Farm Sauvignon Blanc, Gibbston Valley, Central Otago
Near colorless with a slight hint of green in the glass this wine has an outdoorsy nose of wheat fields studded with gooseberry bushes. In the mouth the wine is well balanced and straightforward with pure gooseberry and light, green melon flavors, and enough acidity to keep it interesting as it traverses the palate. Score: 8.5/9.

2004 Chard Farm “Closburn” Chardonnay, Gibbston Valley, Central Otago
Colorless in the glass, this wine has a crisp mineral nose with hints of green apple aromas on the fringes. In the mouth it is bright and juicy with good acidity and possesses lovely green apple and citrus characteristics that give un-oaked Chardonnays a good name. Score: 9.

2004 Chard Farm “Judge and Jury” Chardonnay, Gibbston Valley, Central Otago
The palest of green-gold in color, this wine has stony mineral and cold cream aromas that with a little warmth betray a slight buttery aspect. In the mouth it is full and rich, with good acid but also excellent silky glycerin that supports flavors of cold cream, pears, and a zingy note of lemon zest on the finish which is nicely satisfying. Score: 9/9.5.

2004 Chard Farm Gewurztraminer, Gibbston Valley, Central Otago
Colorless in the glass, this wine smells of peaches and pears (an odd mix to be sure, but very distinct) shot through with a lovely rainwater quality. In the mouth the wine is nicely pert and snappy with good acids and completely dry, offering flavors of white cherries and peaches and a somewhat luxuriant feeling on the tongue. Score: 8.5/9.

2006 Chard Farm Pinot Gris, Gibbston Valley, Central Otago
Lacking a virtually all color in the glass, this wine has a very floral nose with the distinct character of linalool (think Juicyfruit gum) that continues to dominate the wine in the mouth, as it is joined by a mineral aspect. There aren’t enough secondary flavors, nor enough acidity to make this wine really come alive for me, though I can’t find a lot of fault with those characteristics it does possess. Score: 8.

2006 Chard Farm Rose of Pinot Noir, Gibbston Valley, Central Otago
Baby pink in the glass, this wine has an alluring nose of alpine strawberry and watermelon aromas. Inn the mouth it is bouncy and zippy with a nice balance and primary flavors of watermelon, red berries, and earthier tones of wet paper before it finishes crisp. Score: 8.5.

2005 Chard Farm “River Run” Pinot Noir, New Zealand
This blend of fruit from Marlborough and Central Otago is a light garnet color in the glass, with a nose of cranberry and light herbal characteristics. In the mouth it is a relatively no-nonsense Pinot, with light pomegranate and redcurrant flavors in a medium bodied vehicle that doesn’t have much of a finish. Score: 8.

2004 Chard Farm “Sugarloaf Vineyard” Pinot Noir, Bannockburn, Central Otago
Medium ruby in color this wine has a nose that possesses the crisp purity of one of those new age chimes rung with a pure cranberry note in crisp cold air scented with white flowers. In the mouth it is all texture at first, with a sexy, silky feel on the tongue which then wraps around bright, juicy fruit core of cranberry, pomegranate, and redcurrant flavors that last to an excellent finish.. Score: 9/9.5.

2005 Chard Farm “The Viper” Pinot Noir, Gibbston Valley, Central Otago
Medium ruby in the glass this wine has a darker more mysterious nose of earthy and mineral complexity through which only small bits of red berry fruit show through. In the mouth it is perfectly balanced with a tight acidity that drives the primary tart sour plum flavors into the corner of the (smiling) mouth. These are followed by cranberry undertones that incorporate light herbal aspects as they head for a lengthy, impressive finish.. Score: 9/9.5.

2005 Chard Farm “The Tiger” Pinot Noir, Gibbston Valley, Central Otago
Medium garnet in color, this wine has an alluring nose that is well balanced between earthy and more plummy fruit aromas. In the mouth it has a lovely soft velvety tough on the palate with more distinct tannins than the other wines, giving its plum and cranberry flavors a dusty aspect that is distinctive and alluring. Great balance, lovely finish. Score: 9/9.5.

Sadly, I don’t believe these wines are distributed in the United States, at least the winery’s web site leads me to believe they are only exported to Australia.