For The Billionaire Wine Lover That Has Everything 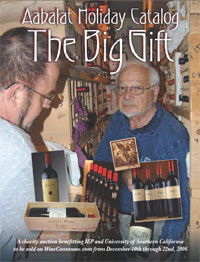 Even though I am most definitely NOT a “shopper” I have spent my share of hours over the years flipping through the Neiman Marcus Christmas Book. Hey, it’s something to do when you’re hanging out with relatives that don’t make good conversation, right?

For those of you who have somehow managed to escape knowledge of this pinnacle of consumer excess, The Christmas Book is an extremely high-production, glossy catalog put out each holiday season by fancy-pants retailer Neiman Marcus, which contains some of the most expensive items to ever grace a department store catalog’s pages. Of course, the photography and styling are phenomenally good, so the issue reads a bit like the Robb Report without any of those annoying articles to get in the way of your shopping.

The point to all this? I’ve just discovered that there’s an equivalent in the wine world. Now I’m normally not keen to point people in the direction of a particular retailer over another, so don’t read this as an endorsement of this particular shop, but “The Big Gift Catalog” put out by wine retailer Aabalat really must be seen to be believed.

For starters, get this: the least expensive item in the catalog is $400. The most expensive? $4.5 Million Dollars. Got anyone on your Christmas list that deserves a really nice present?

Actually this catalog is not really a retail catalog, but an auction catalog for a special online auction that is going on right now on WineCommune.Com. The items on offer are some of the most outrageously awesome , over-the-top wine items I have ever seen on sale.

One of the stunners for me is an 11 year vertical of Cheval Blanc from 1995-2005. So what’s the big deal, you ask? It’s a top Bordeaux, but ten year’s worth of bottles isn’t all that exotic. Ah, yes, but these bottles are a little special. They are Melchiors. For those of you whose mental command of wine trivia doesn’t extend beyond the “Magnum” bottle size, let me remind you: the melchior is an eighteen liter bottle. This 180 liters of Bordeaux will likely set you back between $700,000 and $900,000. Sounds like a deal? You can bid for it right here. Right now it’s up to $490,000, but the seller’s reserve hasn’t been met.

Feel free to pick that one up for me, as a token of your gratitude for turning you on to such a buying opportunity as you’ve never seen in your entire life as one of the world’s richest people.

Thankfully at least some of the proceeds (20% of some lots) will go to benefit both a non-profit health organization in LA, and a scholarship fund for USC Film students suffering from Crohn’s Disease or Asperger Syndrome.

Check out the auction catalog. And when you’re done looking and you want to bid on some wine in a charity event that you might actually be able to afford, click on over to the Menu for Hope III.

Thanks to Jack at Fork & Bottle for the tip.