New Zealand is certainly a land of surprises. A relatively compact landmass, it seems to possess every possible topography and climate. Tropical rainforests, glaciers, arid plains, high deserts, rich low country farmlands, coastal beaches, and alpine foothills, to name just a few. While the country may perhaps be known best for its cool-climate winegrowing, it should really come as no surprise that its winegrowing regions mirror the diversity of its larger geography. The fact that the country has a growing region with a climate like Bordeaux or Rioja, however, still remains somewhat under the radar for most wine lovers.

The Hawke’s Bay region of the Northern Island fans out around and away from the spectacular crescent-shaped natural bay carved into the eastern side of the island. Sheltered from most cool seaborne weather and winds by mountains to the west, north, and south, this area sucks up enough sunshine to allow solar-hungry varietals like Cabernet and Merlot to ripen and thrive. Situated at roughly the same latitude as Madrid, Spain, the Hawkes Bay region, and in particular a sub-region known as The Gimblett Gravels, has become a bit of a Southern Bordeaux.

While the number of chateaux are still growing, there is already one among them that could easily be considered the region’s Chateau Latour, or Chateau Lafite.

Far from the oldest wine producer in the region (it was founded in 1997), Craggy Range is certainly the most prestigious and ambitious. In the style of the great houses of Bordeaux, the winery seemingly spares no expense and overlooks no detail in attempting to produce not only the country’s greatest wines but wines that compete with some of the best wines in the world (an ambitious goal to be 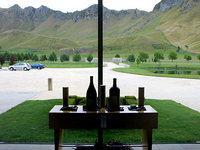 sure). From a stunningly situated winery, beautifully architected with well-manicured grounds, to the bottles themselves, heavy with the priciest glass, labels, and corks, Craggy Range is a class act from start to finish.

Of course, there are vanity wineries all over the world into which their owners pour unlimited funds without ever yielding wines of distinction. Craggy Range not only produces wines worthy of the exquisite packaging and facilities that hold them, it seems well on its way to achieving the goals and vision of its founders.

Started by Terry Peabody, an international businessman, and Steve Smith, an extremely accomplished viticulturalist, Craggy Range Winery has been built in a fashion that few could afford, but to which any ambitious winemaker would aspire. Peabody and Smith sought out (and sometimes waited patiently for) only the best vineyard parcels in most of New Zealand’s wine regions with the goal of making only single-vineyard wines that expressed the best of each place. In addition to geological and agricultural sleuthing skills and sharp real-estate dealings, this required painstaking matching of rootstocks and grape varieties to specific blocks within each site.

Craggy Range’s winery facility is located adjacent to their Hawkes Bay vineyards, snuggled in a small valley between the rocky fins of Te Mata peak and the chain of small mountains from which the winery takes its name. The vineyards, and indeed the whole site of the winery itself perfectly typify the youth and the dynamism of the modern New Zealand wine industry. The deep gravel plateau on which the winery sits was literally created less than 150 years ago, during the floods of 1876, when the Ngaruroro river burst through its banks and deposited an 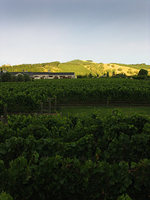 After this literally earth shaking event, the area was fit only for a gravel quarry according to most farmers in the area, but decades later a sharp eyed winegrower realized that the newly minted land might be perfect for growing grapes.

Craggy Range makes two series of wines, both of which are single vineyard designates from their estate vineyards. The Prestige Collection is a group of wines which are each given names, and which are made only in the best years. These include a couple of red Bordeaux blends, a Syrah, a Chardonnay, and a dessert wine. The Vineyard Designate series of wines include mostly single varietal wines from their various vineyards.

Winemaking at Craggy Range is done by the duo of Rod Easthope and Adrian Baker. Easthope focuses on the warmer climate Bordeaux wines and Chardonnay, while Baker covers the cooler climate Pinots and white wines. Under the direction of Steve Smith these two make the most of the winery’s custom designed gravity fed winemaking facilities.

Grapes are hand harvested and sorted in stages, with individual vineyard blocks often vinified separately. When possible indigenous yeasts are used for fermentation which takes place in either steel tanks or oak barrels depending on the wine. Many of the wines are bottled unfined or unfiltered or both, though the winery doesn’t have a strict policy on these methods, preferring instead to do what they feel is required by the vintage. With the exception of the whites, most of the wines spend time in French Oak barrels, ranging from 10 months in 40% new oak for the Syrah, to 21 months in 100% new oak for The Quarry Bordeaux blend.

Ruth and I got a chance to stop by the winery when we were in New Zealand and taste through a number (but not all) of their wines before having a lovely dinner in their on-site restaurant.

2006 Craggy Range Riesling, Glasnevin Gravels, North Canterbury
Light blonde in the glass this wine has a fresh nose of pear and apple aromas. In the mouth it has decent body and acidity with primary flavors of pear and citrus zest which last to a nice finish, providing pleasure without much complexity. Good, though unremarkable. 8.5

2006 Craggy Range “Old Renwick” Sauvignon Blanc, Marlborough
Pale straw in color this wine has a classic nose of tantalizing passion fruit aromas. In the mouth it is very fruit driven without straying over the edge into imbalance, helped no doubt by great acidity and a light minerality that underlies the flavors of passion fruit, kiwi fruit, and green apple that wash sexily over the palate before a crisp finish. Those who want herbal characteristics in their Sauvignon Blanc should stay away, but most anyone else will not find it hard to enjoy. 9

2004 Craggy Range “Te Muna Road” Sauvignon Blanc, Martinborough
Pale gold in color, this wine has a nose of candied lemon peel and honey aromas. On the palate it offers polished, silky flavors of of vanilla, candied lemon, cold cream, and a light minerality that lasts through a reasonable finish. Completely unexpected for a Sauvignon Blanc, this wine is rich and delicate all at the same time, and is made much more in the Bordeaux (Graves) style than the New Zealand. Really a pleasure to drink. 9/9.5

2006 Craggy Range “Kidnappers” Chardonnay, Hawkes Bay
Pale gold in the glass, this wine has a very mineral nose with a light touch of pastry cream. In the mouth it is soft and satiny, with great body and a nicely balanced set of flavors that incorporate citrus zest, cream, and a touch of grapefruit. Missing the depth of a great chardonnay, this is nonetheless an excellent wine. 9

2004 Craggy Range “Gimblett Gravels” Syrah, Hawkes Bay
Medium purple in the glass this wine has a distinct nose of white pepper, cassis and dried herbs. In the mouth it offers soft flavors of cassis, blueberry, and light spice with a barely perceptible tannic structure that unfortunately doesn’t add much depth or complexity. 8.5. Cost: $60. Where to Buy?

2005 Craggy Range “Te Muna Road” Pinot Noir, Martinborough
Medium garnet in the glass this wine has a nice nose of pomegranate and dried herb aromas. In the mouth it is smooth and silky with a nice balance of flavors between fruit and herbal — plum and cranberry fruit flavors with dried oregano and thyme. The wine finishes nicely, with a slight hint of bitterness that sometimes even had a nutty quality to it. 9. Cost: $36. Where to Buy?

2004 Craggy Range “Gimblett Gravels” Merlot, Hawkes Bay
Inky, dark ruby in the glass, this wine has a rich, nutty nose of walnut skin, tobacco and black cherry aromas. On the palate it has both the classical aspects of good Bordeaux, good acid, nice texture, and flavors of pencil lead and tobacco, along with a deep black cherry and wet earth character that seems to be found in the best of the Hawkes Bay red wines. The finish is long and substantial. A fantastic wine from a year that was less than perfect. 9.5

2004 Craggy Range “The Quarry” Bordeaux Blend, Gimblett Gravels, Hawkes Bay
Medium to dark garnet in color, this wine has a perfumed nose of floral aromas that leaned towards violets, along with smells of cherry and damp earth. In the mouth the wine is rich and full with thick black cherry and tobacco flavors supported by supple tannins that carry the finish long into the distance with notes of pencil shavings. By far the best Cabernet based wine I’ve had from New Zealand, and a wine Ruth insisted we purchase before we left. 9.5