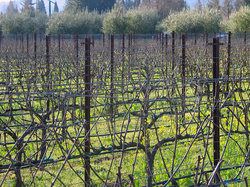 Raking the small stones of gardens, sweeping the autumn leaves, washing stone floors, sanding a deck — the repetition and devotion of simultaneously working the hands and the spirit has a long history. I claim no expertise in the contemplative religions of the world, but many seem to find meditative practices in the simplest of activities — often those associated with good, old fashioned hard labor.

This morning, cold pruning shears in hand, I found my own small bit of existential devotion, snipping a season’s shoots off of a row of Cabernet vines. I was learning to prune, or so I thought.

Pruning is backbreaking work. It requires a substantial amount of hand strength to marshal the shears against sometimes years worth of growth in the vine. Anyone over four feet tall must hunch a bit, reaching down to the low-slung cordons tied to their thigh-high wires.

It’s easy to see why they call this hard work. In three hours I expect to be a knotted mass of aching back and arms.

But today’s lesson is a double one — both learning the mechanics of a job for which I have newfound respect, but more profoundly for me, directly experiencing the vigor, the spirit, and the life of the vines from whose fruit I so often drink.

It is impossible not to notice the strength of the vines as they resist the razor-sharp blade of the shears, and my own clumsy exercise of force. One seasons growth requires so much more than a casual squeeze, and three or four? Sometimes a double handed, brutish clutch.

When the shears cut, the vine bleeds. Less than a second after the naked wood touches the air, sap rises to the surface, sometimes beading round and crystalline in the morning sun, sometimes flowing, not with the viscosity of blood, but with the thin rush of tears.

I am compelled to taste. The sap is watery and slightly herbal on my curious tongue. I am surprised by this. In my naiveté, I expect a sweetness that betrays the next year’s fruit. But of course, that sugar is many months and many hours of sun away.

Even when severed from the cordon, the canes of last year’s growth still display their life, clinging in coils of tendrils with a dried brown tenacity around the wires that run down the row. Some determined shoots still hold the desiccated remains of last year’s fruit — small constellations of now nearly petrified grapes that have been reduced by air and sun and time to little more than mere molecules.

I find it impossible to ignore the struggle that takes place as I work my way through the vineyard. My efforts to prune are met with all the stiff resistance that these hardy vines can muster. As I shuffle from one vine to the next, my world is reduced to a progression of gnarled brown adversaries with whom I grapple. Each of these contests, which differ only in the contortions of my own body in response to the shape of each individual vine, consumes the entirety of my attention, and eventually, the world around me fades to only a background hum of sunlight and cold winter air.

For a few minutes of this morning, there are only the vines and I.

Pruning takes away a wildness of growth, and points the vines towards their own essential shape, but they never quite fully regain it. There is always something different, something changed that means the vine, however subtly, will be different from now on. The same can be said for me.

This is a little piece I wrote this week at the 2007 Symposium for Professional Wine Writers. I was honored to join writers Steven Spurrier, Eric Asimov, Karen MacNeil, Jerry Shriver, Michael Bauer, Anthony Dias Blue, and Elin McCoy, among others, as a speaker for this year’s event. A few of us arrived early on the morning of the first day, and had a chance to learn how to prune vines at the Napa Valley Reserve, a private wine club on the grounds of Meadowood Resort in St. Helena.