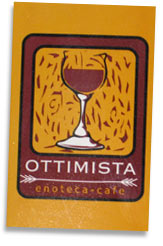 I’m really surprised it that it took until 2005 to get a real wine bar opened on Union Street in San Francisco. Half the Cow Hollow and migrating Marina crowd are still stuck in the three or four sports bars that make up the noisiest sections of Union on Friday nights, but the other half has been crying out for a sensible adult drinking spot for
years. Now thanks to Ottimista, they’ve got one.

Ottimista is a welcome respite from an increasingly upscale dining and nightlife scene on Union street, at least on most nights. On Friday nights almost every place that serves alcohol within twelve blocks becomes a bit of a meat market, but most other times, Ottimista is just what you want from a wine bar: low key and comfortable. I like sitting at the communal high table in the back of the restaurant on summer evenings while it’s still light out watching the shoppers go by while I sip wine.

Owner Mellissa Gisler, executive chef Mark Young, and wine director Don Jost have created a small temple of Italian wine and food that encourages exploration as much as it does relaxation. The wine list, which isn’t updated quite as often as it could be, has about 17 whites and 15 reds that are available by the glass, most of which are Italian wines with an occasional French and Californian wine thrown in the mix. Annoyingly there is no mention on the menu that the wines are available by the half-glass as well, though no one has batted an eye the last couple of times I’ve been in and ordered everything by the half-glass. The staff is also quite happy to pour a small taste for the curious or indecisive. If the bar really wanted to achieve its stated mission of “share our passion and enjoyment of wine, and remove the intimidation factor that often surrounds it” they would do well to explicitly offer wines by the taste, and they could expand their by-the-glass offerings while they were at it.

The bottle list is modestly sized (as well as priced) and nicely organized by region, with an emphasis on Northern Italian appellations, though it also has a pleasantly wide ranging smattering of international wines from Lebanon, Slovenia, Argentina and most of the usual suspects. I appreciate the fact that someone has made an effort to find 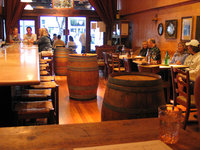 older vintages of some wines, especially from many of the Italian regions, giving diners or groups of wine lovers the opportunity to sample wines from the late 80s and early 90’s without breaking the bank in many cases.

Ottimista is a full restaurant in addition to being wine bar, offering a small and large plates menu of casual Italian fare served all day, and a brunch menu served 11 to 3 on the weekends. The food is made with good ingredients and is not fussy. About what you’d want if your main goal was to drink some wine, but perhaps disappointing if you were thinking first about food.

The atmosphere at Ottomista is a direct product of how many people are there. At five o-clock on a Wednesday it’s a great place to have a conversation with a friend over some wine, but when folks are stacked up at the bar on weekends, it can be a bit of a scene, and one that I generally avoid. Even at its worst, however, it’s far better than some of the other joints on the block.

Ottimista is no doubt a welcome addition to Cow Hollow and someplace I’d hang out especially if I lived walking distance away. It is, however, not a destination that serious wine lovers will find worth going out of the way for.

Parking in the neighborhood is painful most of the time you’d want to visit, so cabs are a good idea.

Friday nights can be a scene, but not one where you couldn’t get away with jeans and a t-shirt.