How to Taste 200 Wines and Not Die Trying 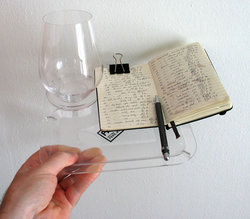 Regular readers know that I frequently attend large public tastings at which I regularly taste and evaluate between 100 and 250 wines in the course of a few hours. I’ve been doing that for a couple of years now, and it’s pretty much old hat for me — I don’t think much about it. But recently I’ve gotten quite a few questions about how it is that I manage to do it, and whether I have any advice for those contemplating attendance at large tasting events.

So, as I promised to several of these individuals who asked, here are my secrets to surviving mass tastings.

TRAINING
Mass tastings are an endurance sport. I’m not joking in the slightest when I say that. I’m not about to suggest that wine tasting become a sport (though some Brits are trying hard to make it one), but tasting wine in large quantities for extended periods of time is really exhausting. Many people have heard the term palate fatigue, but most people forget that tasting involves more of your body than just your mouth. When I go to these tastings I’m on my feet for three to five hours without a break. I’m carrying a notebook, a clipboard, and a wineglass, and usually have a bag slung over my shoulder with a camera in it. At the end of tastings lots of things hurt: my feet, my back, my teeth, and sometimes my head.

Like any physically exhausting activity, mass tasting gets easier with practice. You can get in shape for it just like anything else, and that goes for your palate and your feet. Wine lovers that are interested in getting to the point of being able to taste several hundred wines at a stretch need to work up to it, just as marathon runners work up to their 26 miles. So go to as many tastings as you can, as often as you can and taste as many wines as you can.

Over time, you will find yourself hitting that wall where you simply can’t taste anymore later and later into the tasting. You will gradually build up endurance, flexibility, and strength. Now if someone could just show me how to flex my palate, I think I could impress a lot of people.

The other thing that requires practice, of course, is spitting, which is mandatory. I’ll admit right out that I’m not a great spitter myself, but I have definitely improved over time, and the best practice I get is actually in the shower. Try spitting so that you get a tight stream of water that jets away (or even slightly up) from your mouth. I’ve found that protruding my lower lip ever so slightly helps make for a better result, but everyone needs to find their own technique.

PREPARATION
I do several things to prepare for a big tasting. Perhaps the most important is to get a really, really good night’s sleep the evening before. I tend to need eight hours of sleep to feel fully rested, and the nights before a big tasting I try to get nine. I’m convinced that this aids my sensitivity and my taste memory the next day.

The day of the tasting, I try to eat well, and only mild, innocuous foods, avoiding strong flavors, spicy foods, and things like garlic and onions. I also try to eat full and regular meals, ideally having a meal about an hour before the tasting so that I’ve got food in my stomach as I taste. When attending tastings at Fort Mason in San Francisco, I always try to leave time to stop and get a turkey sandwich at Viking Subs. I usually sit in the park and eat it an hour or so before the tasting, which also helps me get a parking spot and arrive at the tasting early and calm, not rushed and frantic.

I try to be at tastings right when they open, as it gets harder to taste at the pace you want to the more people there are in attendance.

TASTING 200 WINES
So here’s how I taste. First I figure out how I am going to move through the tasting. Am I going to go straight through and hit every station, or am I going to be selective? Are there wines that I know will run out — if so, I tend to hit those first.

If the booklet provided for the tasting is well organized, has spaces for tasting notes, and corresponds to the physical layout of the tasting, then I tend to use the booklet provided. If not, that goes in my bag and I use my own notebook. I have my notebook clipped to a plastic tray, which serves as a clipboard and a plate, and has a notch that can hold my wineglass while I take notes. I also have a bottle of water with me in my bag.

I move through the wine stations quickly but not at a breakneck speed. There’s a fine line between the two. I tend to taste most every wine poured at the table, and I do so in a pretty standard fashion: swirl, sniff, sip, aspirate the wine and exhale through my nose to get more aroma, swish it in my mouth, and then spit into the bucket provided (I don’t carry a spit cup with me as it is too much to juggle with the notebook and the wine glass).

When I am tasting at big events, as you may know, I don’t write tasting notes, mostly because after about 30 of them it becomes really difficult to avoid repeating yourself, and also because while I trust my palate to evaluate the relative quality of a couple hundred different wines in a comparative fashion, I wouldn’t trust my palate to pick up every subtlety I would want to craft a proper tasting note for the wine. Not to mention the fact that writing tasting notes takes a lot of time.

If there are a relatively smaller number of wines for tasting (say, less than 100) I’ll usually taste whites first, and then reds. However at larger tastings, this is simply impractical, and I’ve also come to feel that the variation between the wines actually helps keep my palate fresher than if I taste 60 Chardonnays and then 80 Cabernets.

I drink a good bit of water at these events. Usually several gulps every twenty or so wines. I also try to have a bit of bread or cracker at about the same interval. If cheeses are provided at the tasting I find cheddar really tends to clear and neutralize my palate, so I’ll chow a few cheddar cubes every twenty or so wines. Jack cheese is a good second choice for me, but I tend to stay away from the goat cheeses (as much as I like them) and the stinkier sorts.

Finally, the other thing that helps me taste so many wines successfully is that I generally don’t really talk to people. For many, these wine tastings are as much social as they are about tasting. But with the goal of tasting a lot of wine, there’s just no time to stop and chat. Those who have seen me at these tastings know that I’m not much fun to hang out with. Having said that, I do find that pausing for a little while after every hour or so to have a conversation can be refreshing of both the mind and the palate. Talking moves air across the palate and moves different parts of your brain, and I guess it feels like the equivalent of taking a short break to focus your eyes away from the computer monitor every once in a while.

Other little tidbits of advice for these public tastings that I’ve learned over the years: