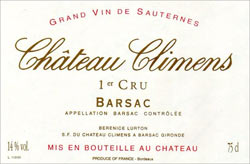 There are an endless number of formative wine experiences to provide enthusiastic wine lovers with memorable introductions to new levels of wine appreciation or knowledge. These moments, which are so easily to forget in a lifetime of serious wine drinking, should definitely be cherished in the same way we might hang onto the infant drawings of our children.

Most wine lovers don’t remember their first taste of Cabernet or Merlot. These early introductions to different varietals are best forgotten anyway, coming as they often do in bottles that could charitably be called “value priced.” There is one type of wine, however, whose first draughts never amount to swallows of Lethe.

Almost everyone who pays attention to wine remembers their first Sauternes.

Like so many of my early wine experiences, there wasn’t anything wholly remarkable about my first experience with this white dessert wine from Bordeaux. I went out and bought some because no one else was going to buy it for me, and after reading about it, and hearing the way that some more wine savvy friends talked about it in hushed, reverent tones, I needed to see what all the fuss was about.

Sauternes is one of the wine world’s more fascinating and enigmatic wines. The sub-appellation of Bordeaux for which it is named is unique in the word for its centuries long (Thomas Jefferson was an avid fan of the region’s wine) production of only a single sweet white wine made from Semillon, Sauvignon Blanc, and occasionally a smidgen of Muscadelle grapes. More compelling to me in my early career as a wine lover, however, was the circumstances and nature of Sauternes’ production. It was the first wine I had heard of (and indeed, the first wine I ever tried) that was made from grapes afflicted with Botrytis cinerea, or Noble Rot.

The idea of a wine so difficult to make that in some years it is not even produced — requiring the persistent and not always present successive alternation of thick mists and then sunshine in the vineyard — continues to be a romantic draw for many wine lovers even today.

The mysterious circumstance of its production, the very small quantities produced, and the flavor of the wine itself made my own curious first taste of the wine an indelible memory, as it no doubt did for many other wine lovers.

Sauternes roughly 4200 acres (and the 1300 or so acres of its co-appellation, Barsac) are tucked into the Graves district in the southernmost part of Bordeaux. Wines made in both appellations can be sold as Sauternes, which is the typical approach taken by the modest number of producers in the region who continue to brave the difficulty of producing these wines year after year.

Among these producers there are a few that have been doing it for much longer than most. Most everyone who has heard of Sauternes has heard of Chateau d’Yquem, which is nearly synonymous with the region. Less well known, but no less ancient and prestigious is the property of Chateau Climens.

The Climens estate has been making wines in Sauternes long enough to have made dry red wines in the region at one time, an accomplishment which means that the name of the Chateau was appearing on bottles by the early 17th century. Passing through several hands as the years went by, the estate was classified as a Premier Cru in the famous 1855 Classification which codified the pecking order of the Medoc wines, and finally landed in the hands of the Lurton family in 1971, which continues to manage it today with the guiding hand of Bérénice Lurton who assumed control of the estate in 1992.

Chateau Climens makes approximately 3000 cases of wine each year (though it can sometimes be much less than that, or even none, if things are particularly bad). The estate farms approximately 60 acres of land in the Barsac appellation, planted entirely with Semillon of which the average vine age is approximately 35 years. Climens boasts the highest elevation in the region, a mere 60 feet above sea level, and excellent, well draining soils. Like other meticulous producers in the region, the estate harvests its grapes in many successive passes through the vineyard, waiting for each bunch of grapes to reach an optimal state of rot and desiccation and carefully avoiding those clusters that succumb to merely ruinous grey rot.

These delicately hand-harvested bunches are ever-so-gently pressed to yield their miniscule amount of juice, which ferments slowly with native yeasts in separate lots corresponding to different vineyard blocks. The wine is aged in French oak, of which only about 60% is new each year. This relatively low percentage of new oak is one of the distinctive features of Climens Sauternes, which along with their typically higher acidity levels than other producers make them my favorite producer in the region.

In addition to their main wine, Climens also produces a second-tier wine by the name of Cyprès de Climens.

Tasting Notes:
This wine is bright orange-gold in the glass, and when swirled wafts rich aromas of honey, Ranier cherries, and the freshness of spring rain to the nose. Words like heady and rich don’t begin to describe the smell — if it weren’t such a strange oxymoron, the word intoxicating would be perfect to describe the olfactory pleasure. In the mouth the wine sings with a pure resonant flavor that is suspended between perfectly balanced sugar and acidity. It’s not going too far to call this wine “liquid sex on the tongue” as it lounges in its satin nightgown for minutes and minutes on the palate with flavors of jasmine flowers and sugarcane juice, then orange blossoms, eventually migrating towards something that words aren’t really good at capturing. Everyone with experience has a benchmark for what Sauternes really should taste like, and this is now mine.

Food Pairing:
With dessert wines this good, I never like to pair them with anything. They deserve to be sipped on their own. But if you had to match it with something, I’d suggest a goat cheese soufflé.