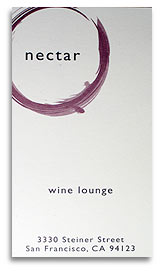 I don’t spend much time in San Francisco’s Marina District. It’s quite the hike across the city for me from my sleepy little neighborhood, and I generally don’t like the scene, which reminds me of all the parties that I never wanted to go to in college. There are a few venues, however, which ensure that I do keep coming back to the Marina occasionally, and one of them is most certainly Nectar Wine Lounge.

A combination wine bar, restaurant, and wine store, Nectar does an excellent job at the first two, and a lousy job at the latter. Were it not for the retail bottle prices on the wine list most patrons would have no idea that the unobtrusive wine rack at the front of of the space was meant for anything other than storage. But there are plenty of wine stores in San Francisco, so the fact that Nectar is better at selling wine by the glass than it is by the case should bother no one.

Nectar maintains a constantly changing list of twenty or so whites and roughly the same number of reds, plus a few dessert wines. Additionally there are usually a few attitude-laden “flights of nectar” which offer tastes of three wines for around $15. On my recent visit, these flights included “the kiwi flight,” and the “bad-assed red flight” among others. The wines on this flight, as well as the rest of the wide-ranging by-the-glass list, are each accompanied by an individual tasting-note-cum-marketing-pitch that verges on the ridiculous as often as it actually flirts with remarkable accuracy. These attitude-laden tasting notes seem perfect for the target market of young twenty-somethings that heavily populate Nectar on most evenings after 7:00 PM and can be quite charming at times.

Luckily, the frivolity at Nectar is all in the marketing — when it comes to selection, the wine list has just the right amount of seriousness. This goes for the by-the-glass list, which, last time I was there, contained a mere 5 wines from California (!) and ranged in coverage from Greece to Hungary to Spain to Austria to Chile. The by-the-bottle list is even more impressive — much better than many restaurants in the city — with excellent coverage of Germany and Austria (areas overlooked by many wine lists) along with deep representation in France, California, and most other major wine regions, including older vintages in many areas.

Delightfully, Nectar seems to take as much care with their food as they do with their wine. Executive Chef Jason Moniz has built a deceptively simple looking menu (categorized simply as “Savory” and “Sweet”) filled with (apart 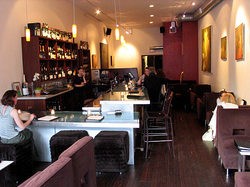 from a few exceptions) some of the best wine-bar food in the city. Anyone scared off of the many thin-crust pizzettas that are common in many wine bars would do well to try one of the frequently changing creations from Moriz’s kitchen. I had one recently made of Cambezola cheese and apples that was delightful both in its flavor, and in its wine friendliness. Perhaps the highest compliment I can pay to the kitchen is that they have truly made a successful effort to offer wine-friendly food. As you might expect, every dish comes with a recommended pairing.

All of this is almost enough to make it worthwhile to brave the evening crush of well coiffed and well heeled denizens of the Marina. Thankfully the most rowdy of this perpetually young crowd don’t often brave the modern, lounge-feel of Nectar with its deep house music, preferring instead the sports bars down the street.

If I’m with friends I enjoy snagging the low couches, but often I’ll just sit at the bar where I have the opportunity to chat with the servers about the wine. Sadly, about half of the time these conversations don’t go very far — the staff range from extremely informed about the wine to fairly clueless. Thankfully, at the very least they know enough to provide the correct, high-quality wine glass for your selection, and who to ask for more information. The most knowledgeable person around is usually Anton, one of the owners whom I see with regularity at most major trade tastings, diligently looking for new wines.

In summary, there’s really only one thing I have to say about Nectar: I wish it were a heck of a lot closer to where I live and work. It’s definitely one of the best places to get a glass of wine in the city, as well as in Burlingame, where it just opened a second location.

Open 7 days a week starting at 5:30 PM and closing at 10:00 PM most nights, 11:00 PM on Saturday and Sunday. On Sunday the bar opens at 4:00 PM. Reservations are possible, and can be made by calling the bar or online through OpenTable.Com.

Parking in the neighborhood is brutal, to say the least. Taxi or public transportation is highly recommended.

This is the heart of the Marina, which means that you’ll want to dress up a bit to mingle amidst the beautiful people.