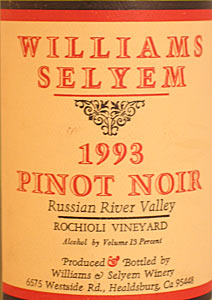 It’s not every day that I get to tell the majority of the wine world that they’re dead wrong, so forgive me if I savor this a little. There is a widespread belief in critical circles that California Pinot Noir does not age well. Like all blanket stereotypes there is some truth to this, especially among those wines that are made in the lush fruit-driven style that is popular these days. And furthermore it may be true that California Pinot Noir can’t age as long as Burgundy can (though we’re about a decade away from even being able to put that to the test). But forget generalities for a moment and lets talk about real world, real wines, real criticism.

Every single wine critic of note suggests that this wine, and any other California Pinot of this age, is past its drinking window.

To which I say, based on my experience with this and several other wines of similar age that I have popped open recently: horseshit. Now don’t try this at home with your average $15 Pinot kids, but there are a number of better made Pinot Noirs from Sonoma County that are at 14 years of bottle age and going strong, with gorgeous fruit and….well, I am getting ahead of myself. The tasting note comes later.

We don’t have a Cru classification in the US (we just have mailing lists and release prices) but if ever there were a candidate for a Grand Cru Pinot Noir in California, this wine would certainly be at the top of the list by anyone who knew much about the subject.

Williams Selyem winery was founded in 1981 by Burt Williams and Ed Selyem, two friends who started making wine together in their garage in Forestville, California in the late seventies just because they loved the stuff and wanted to drink more of the stuff and loved a challenge. A few years later, what started as a hobby became an avocation, and in a few more years, a cult phenomenon. Over the course of a decade or two Williams Selyem winery played a major role in establishing Sonoma County as a premier winegrowing region, and establishing California as a world-class Pinot Noir producing region.

Surprisingly, the two didn’t start with Pinot Noir as a goal, they actually were more excited about Zinfandel (which William Selyem still makes) but it was ultimately Pinot Noir that captured the majority of their attention, and the attention of the wider world when their 1985 Rochioli vineyard Pinot Noir (the grandpappy of this little bottle, you might say) was the winner at the California State fair in 1987, and the winery was simultaneously awarded the designation Winery of the Year.

At that point Williams Selyem was still just two guys in a garage, marshalling an army of friends to meticulously hand pick, hand sort, and hand crush small lots of grapes from what were at the time, relatively young but clearly very high quality vineyards. One of the more established vineyards was Rochioli vineyard, which, depending on who you ask, may arguably be the single most famous Pinot Noir vineyard in California, and certainly remains one of the most respected (and expensive) sources of Pinot in the state.

At the time that Williams Selyem began getting fruit from them, the Rochioli family had already been growing grapes on their farm in the Russian River Valley for nearly 20 years, and were already beginning to make a name for themselves with their own estate wines. Williams Selyem primarily has access to grapes from a section of vineyard known as the River Block, a flat, wide expanse of ancient floodplain that sits on benchland above the Russian River a few minutes outside of Healdsburg.

By the early Nineties, William-Selyem had become one of Sonoma County’s first cult wineries. People were waiting years to get on their mailing list, and the wines were selling out before they ever got the chance to hit retail stores. But about that time, Burt and Ed were ready for a break after nearly 20 years of winemaking, and sold the winery to its present owners, John and Kathe Dyson in 1998. While the ownership and winemaking team has changed, the demand for the wines has not.

Currently the winemaking is done by Bob Cabral, Lynn Krausmann and enologist Adam Goodrich, with little deviation from the strictly minimalist approach taken by the founders. Today, like in 1993 when this wine was made, no mechanical pumping is ever done to the wine, nor any filtration, and the wine is aged in a mix of French oak of which about 50% is new. Babied through the entire winemaking process process, apart from a forklift and a press, nearly everything is done by hand by this small group of individuals under Cabral’s careful direction. Williams Selyem’s success as a winery has afforded it the luxury of being able to make no compromises when it comes to winemaking, which includes the ability to be a bit more European about working with the wine — the wine takes as long as it takes — to ferment, to age, to sit in the bottle.

So let’s get back to the bottle, shall we? Through a couple of new friends who were long time California Pinot collectors, I had the opportunity to get my hands on a couple of cases of aged Pinot Noir from several top producers, and among them were several bottles from the early Nineties, including this one. To my great fortune, they were all purchased on release directly from the winery and aged in a temperature controlled cellar, and so (with the exception of one unfortunate bottle the other day hat had a leaky cork) were in perfect condition.

I can’t begin to tell you how lucky I feel to be able to drink this wine, and how gratified I am to know just how awesome these well-aged California Pinots can be. I’d be foolish to urge you to go out and find them, because you never know what’s happened to them or where they’ve been in the last 15 years, but if you happen to have access to some, they are certainly a treasure.

And to all the other wine critics out there: you better add 10 years to your “drinkability window.”

Tasting Notes:
Light to medium blood red in the glass, this wine has an alluring nose of red apple skin and smoked meat aromas. In the mouth it is unbelievably silky and sexy (think: Sophie Marceau in a camisole) with perfect poise and balance. Like a prism refracting a sunbeam into different colors, the red fruit core of the wine resolves into caramel, redcurrant, raspberry, cedar and other flavors that lift and soar through an incredible finish that is both weightless and penetrating, if you’ll permit me to romantically juxtapose concepts. I do believe the term I used at the time to sum up the wine was simple: Rockin’.

Food Pairing:
Drinking this wine makes me forget about food. Though I was eating when I drank it with some good friends some time ago. We paired it with a roast guinea hen over faro salad that was divine.

How Much?: On release it was probably a head-slapping $40.