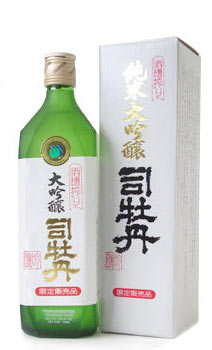 At its best, like the finest wines of the world, sake provides a window into another world. While a great vintage of wine from a top producer may offer a glimpse through the lens of time into a particular patch of soil and a given harvest, a great sake offers a view of something more ethereal, more insubstantial. With sake there is no real expression of terra firma, instead there is an expression of what might best be described as atmosphere — a quality of light, of air, of history. Sometimes when I’m drinking great sake, I imagine that in the dead of winter (when sake is usually made) I’ve stumbled upon an ancient temple in the soundless snow, and heaving open the massive wood and stone door, I am greeted by air that has been locked away for centuries, but which still carries the faint aromas of the plum blossoms in spring.

Or perhaps I am dipping my cup in a mountain spring, bubbling up from deep within the earth and carrying with it sweet aromas of seasons gone by and ancient forests that no longer exist. It may be merely romantic projection on my part, but something about sake always seems so much more timeless than wine, no matter what the vintage.

Of course, this sense (or mere fantasy) of timelessness is easily reinforced b the fact that some of the best sake breweries in the world have been around for centuries longer than most wine producers. Tsukasa Botan, for instance, is one of the oldest and most prestigious breweries in the Kochi prefecture on the south coast of Shikoku, Japan. It began operations in 1603, which essentially puts it at the beginning of sake making in the region. Operating virtually uninterrupted (apart from some pauses during the World Wars) for four centuries, the business was formally incorporated in its modern form in 1918.

Tosa, the original name for the region where Tsukasabotan makes its home, despite its long history, is not widely acclaimed as a sake producing region, but its people do have a claim to fame when it comes to sake — they are some of the heaviest consumers of the stuff in all of Japan. The people of Tosa love their sake, despite having only a couple of dozen producers in the region.

Tsukasabotan participated in the project and made their own version of space sake. Lucky for us, they also make some vastly superior sake, such as this one, which is their top-of the line export. Named King of the Peonies, this is a junmai daiginjo sake, which means it is made from rice grains (in this case Yamada Nishiki rice) that have been polished down to at least 50% of their original mass, and no additional alcohol has been added during the fermentation process (most often done to improve the aroma and lighten the texture). Additionally I believe this sake to be made using the shizuku method, which means that it is the wine equivalent of “free run juice” — only made from sake that has dripped from the mash under the force of gravity in near freezing conditions — no pressing involved. This method yields extremely small, precious quantities of high quality sake.

Tasting Notes:
Colorless in the glass, this sake has an appealing nose of subtle orange rind and white flower aromas. In the mouth it is satiny and weighty with a touch of sweetness and a hint of wood flavor as it winds its way across the palate. Perfectly balanced, with excellent acidity, the flavors unroll with floral notes, hints of tropical fruits and rainwater-like minerality as it heads for a finish that offers a bit of spiciness as it lingers with length. Fantastic and classic in its construction — a great example of why I love junmai daiginjo sake.

Food Pairing:
This is a classic sashimi sake — delicate and floral and seemingly destined to complement the subtle flavors of raw fish. Perhaps the highest compliment I can pay is to say I’d love to drink it with a classically prepared serving of hirame (fluke), cut paper thin by a master sushi chef.