Whenever You Can, Blame The Consultants 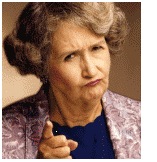 It’s hard to blame people for acting like people, but our tendencies as a species sometimes blow me away. Find me someone in a situation they’re unhappy with, and I’ll show you a person looking for a scapegoat. I suppose some evolutionary psychologist could tell me why it is that we always want to blame somebody, anybody, for the state of the world, but for now I’m left chuckling and half-horrified as always.

I like to make a big deal out of the difficulties that France is facing at the moment. I’ve called it a crisis of epic proportions, which I believe it is. (The world awaits to see whether the new President of France thinks so, too. If he doesn’t things are going to get ugly). But there is at least one person who thinks it’s worse off than I do. Nicolas Joly, arguably the living patron saint of the Biodynamic wine movement has just had his own Sartre-like moment, and proclaimed the death of the AOC (Appellation d’Origine Contrôlée). And he’s not talking about the governmental system. He’s talking about the dirt. When he says the appellations are dead, he really means it — as if they’ve been taken out behind the barn and shot.

And of course, there’s someone to blame: the wine consultants.

As a consultant (though not of wine) myself, I cackle with glee at the idiocy of such a remark. Why? Because consultants are paid to do one thing only — what other people tell them to do. Criticizing the “flying winemakers” for ruining wine is like yelling at your caterer for ruining your wedding after no one ate that special lobster and clams dish you insisted on them serving.

Joly claims that it was consultants who first recommended the application of herbicides to the vineyards of France, which, in his opinion, have killed the soul of the soil. He also names a litany of other complaints, from the use of commercial yeasts to chemical fertilizers to synthetic sap treatments (anyone out there know what the heck this is?). All the fault of those damn consultants.

Joly must be kept up at night by this list, then, that has only a few things on it that aren’t also allowed in France.

Why is it that Joly finds the need to bash a group of people who are so knowledgeable about wine that other people pay them for advice. A cynical person might suggest that he is grandstanding in furtherance of his own agenda, one that stands directly opposed to the type of advice proffered by such consultants.

I’m of the opinion, however, that Joly is acting consistently with how he always acts: like a human being who believes his own stories — something that we all do. But we also make two consistent mistakes as well. We either assume that other people believe our stories just as much as we do, or worse, we proselytize those stories upon the world, insisting with our particularly human brand of naiveté that we speak the truth.