Steinberger on the Physiology of Taste 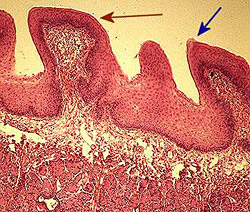 Sometimes we forget that the world is moving along under our feet, sweeping its way around the Sun and that the human race is learning all sorts of stuff every day as we go through our ordinary lives. It’s hard to observe, for instance, scientific progress being made. I know that I tend to forget that some of the things that we “know” about the world are still being figured out.

Take for instance, the mysterious and complex world of taste and aroma. Nobody has exactly figured out why wine tastes as good as it does, or why certain people prefer certain wines instead of others.

Relatively recently, however, scientists have revealed more about the way that each of us perceives taste. Perhaps you’ve heard of Tasters, Non-tasters, and Supertasters? These labels, which correlate to the density of taste buds on the tongue and sensitivity to certain chemical compounds, are the result of research over the past two decades into the physiology and neurochemistry of taste.

Recently some of the major wine critics around the world have announced, somewhat publicly, their status as Supertasters, with the resulting implication (intended or otherwise), that perhaps their station as critics might be due to their physiological superiority.

The little furor over these announcements seems to have inspired wine writer Michael Steinberger, who has written a three part series about his exploration of the topic that is so good, we might just even have to forgive his earlier lapses into insanity where Sauvignon Blanc is concerned.

In this series, which several readers alerted me to, Steinberger sets out to explore the topic of how we perceive taste, and ends up finding out that shockingly, he is a Non-taster, and must come to grips with the implications for his career as a wine writer.

The tongue-in-cheek drama of that revelation is good for a chuckle, but his explanation of the research and his cogent analysis of what these terms actually mean (not what you would think), is by far the best thing about the series. The articles are a great survey of what we know, and more importantly what we still don’t know about the reason that wine tastes so good, and Steinberger hits a home run with the revelation that the research points to a reality in which the value of one person’s so called “expert opinion” about wine can hardly be called expert when you look at things from a physiological standpoint:

“The research being done into the physiology of taste seemed to carry with it the suggestion that some palates were more naturally gifted than others and that scientists would eventually be able to identify the specific traits that separated the good ones from the not-so-good ones. The insights being gleaned about the psychology of taste appeared to point in a different, but also worrying, direction: namely, that because gustatory preferences were so individualistic and idiosyncratic, no one palate could ever be considered more knowledgeable than another, and any wide-ranging agreement about the merits of a particular wine was more likely the product of groupthink than of true consensus.”

And if that is not proof that we shouldn’t blindly follow wine critics around like we are on a leash, I don’t know what is.

Anyhow, I highly recommend reading these pieces, as they are some of the better wine writing and reporting that I’ve seen this year, to steal a descriptor from a friend.