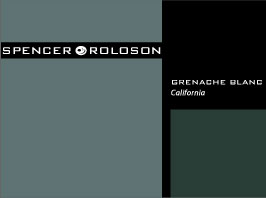 It’s particularly pleasurable to watch a small wine label mature and make a name for itself in the world. I guess that could sound patronizing if I didn’t make clear that I underline this sentiment with the utmost admiration for the hard work and talent that is required to have a wine label survive at all, let alone thrive.

I have been watching, and drinking, Spencer Roloson wines since I first started writing about wine. At that time they were on their third or fourth vintage, and owner winemaker Sam Spencer was still settling into his groove, as it were. The early wines I tasted were all good, and some of them excellent, but it was clear that they were not the full expression of what Spencer wanted to convey. After three more years and an increasing focus on his own estate grown fruit, Spencer’s wines now possess a confidence and poise that feels mature and sexy.

Spencer Roloson winery is owned by Spencer and his wife Wendy Roloson. Spencer started his wine career as an apprentice wine steward in Auckland, New Zealand at a restaurant called SPQR. At the time he knew nothing about wine, but in the process of working at the restaurant he got an opportunity to spend about 10 days working the harvest at Cloudy Bay. “When I was there, it just clicked,” he says. That was the moment he knew he wanted to be involved in the making of wine. Returning to the states, he worked as a cellar rat at Green and Red Vineyards, until the owner, his friend and mentor Jay Heminway, told him to set his sights farther and wider, and pushed him out of the nest. From there, Spencer moved on to open Hayes and Vine, which quickly became San Francisco’s iconic wine bar, and then several years later moved on to a career as vintner and vineyard manager in various international locales as far flung as Argentina, Chile, and Spain.

As a winegrower, Spencer focuses on what he calls “extremist” vineyard sites. These fringe growing regions might be charitably called “up and coming” and they are one of the reasons I was initially drawn to Spencer’s wines. Farming two vineyard projects, La Herradura Vineyard in the Conn Valley and Madder Lake Vineyard in Clear Lake, to the north of Mount St. Helena, Spencer has made a huge investment in mastering the northernmost end of Napa and the southern end of Lake County.

Spencer said that he did not consciously try to seek out areas like Lake County, but when he started looking for vineyard sites that met specific criteria for him, the pickings were few and far between in Napa and Sonoma (not to mention extremely expensive). When he stumbled on what he considered a perfect vineyard site on a day trip to Madder Lake with a friend, he just grabbed it.

“I wanted something in extremis. This was a natural amphitheater bowl cut into a steep hillside of volcanic and plutonic rock, with thirty degree slopes. When I saw it, I knew that it was the right place intuitively. It’s turning out to be a really special spot.”

Sam seems to bring a lot of things to bear on his consideration of wine and winemaking: An intense focus on and knowledge of the geology of his vineyard sites based on his time spent working in mountain vineyards in South America; a strong sense of the type of wines he wants to make based on abiding love of wines from the Rhone and Ribera del Duero; and a dedication to growing of the grapes. “I really believe that farming is the most important thing we do. A lot of winemakers will say ‘the wine is made in the vineyard’ but they don’t walk the walk. My boots are a testament to what kind of winemaker I am. I’m in the vineyards and up and down the hillsides all the time,” he says.

About his winemaking philosophy, Spencer says, “When I’m making wine I tend to use a classical reference. I’m always referring back to Cote-Rotie, Condrieu, Ribera del Duero. I want to reflect the spirit of those wines, but through a California lens. I want to give you a classically formed and considered wine that reflects both the roots of the wine ” sometimes even the specific place in Europe where we cut the buds for the vine ” as well as my own interpretation of the vineyard site. My wines should have the depth and complexity of those older sites, but also something lush and voluptuous that reflects this climate.”

Spencer has no plans to grow the winery beyond a few thousand cases, but he continues to find interesting vineyard plots, including the one for this wine. Esperanza vineyard is in Clarksburg, a small town in the Sacramento River Delta region. Outside of any specific AVA or appellation, the vineyard was supposed to be planted with Grenache Noir (what we commonly refer to just as Grenache) but a vine misidentification led to several acres being planted with Grenache Blanc instead.

The delicate fruit is hand harvested and fermented in steel tanks, then aged on the lees (residue of yeast, seeds, and other particulates from the fermentation process) in neutral oak barrels before bottling. I know this wine is made in small quantities, but I am not entirely sure how much is available — certainly no more than a couple hundred cases.

Full disclosure: I received this wine as a press sample

Tasting Notes:
Pale gold in the glass this wine has an ambrosia-like nose of white flowers, vanilla beans, and angel food cake. In the mouth it is perfectly balanced with excellent acid and a silky texture that cuddles around the edges of the tongue with coy, complex flavors of pear, sarsaparilla, and wet stones. As it heads for the back of the palate, the wine shifts from mineral to spicier elements and reincorporates the vanilla notes from the nose, drawing them out into a lingering, pleasurable finish. More people should make Rhone varietals like this. Excellent.

Food Pairing:
What wouldn’t this wine pair well with? Eminently food friendly, this wine would be an excellent match for this cauliflower soup with seared scallops and caviar.

This wine is not the current vintage but it is still available for purchase on the internet. The 2006 vintage was recently released and is also available.