Tasting Notes for Indian Wine: The Good, The Bad, and The Ugly 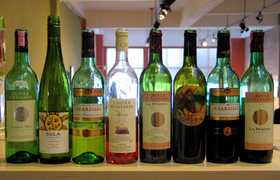 Shall I reveal to you the true depths of my wine geekness? One of the most exciting things that I’ve done in the last few months was to get together with a friend of mine named Kimberly, who owns a wine marketing and communication agency and taste a whole bunch of wines from India that one of her colleagues had convinced a family member to send them.

Indian wine is unknown territory for most wine lovers, and rightfully so. Winemaking, at least modern winemaking with vinifera grapes in India is a relatively recent phenomenon, though winemaking in some form has been practiced in the country for nearly 2000 years. It’s not entirely clear to me when the first modern commercial wine was made in India, but it was certainly probably in the 1980s at the earliest. National laws about winegrowing and winemaking were only instituted in 2001 and the Maharashtra Grape Board, a marketing organization for the country’s major wine region, was established in 2005.

There are about 40 wineries operating in the country with about 3000 acres of vineyards planted to Shiraz, Cabernet, Pinot Noir, Merlot, Zinfandel, Chenin Blanc, Sauvignon Blanc, Ugni Blanc, Viognier, Chardonnay, and Riesling. In total the country produces about 700,000 cases of wine per year — less than some of California’s larger single wineries.

Just as in China however, as the middle class increases in size, demand for wine and interest in wine grows. Likewise, as wine production becomes expensive elsewhere in the world, and the global demand for cheap wine grows, India may grow as a player in the world wine market.

Indeed, wine projects in India are already attracting the attention and efforts of some heavy hitters in the wine world, Michel Rolland among them. International winemakers and winemaking consultants are increasingly paying attention to the developing wine industry in India.

I always get excited about tasting wines from new regions, so it was a pleasure to sit down with my friend Kimberly and a few other folks and taste through the wines that she had managed to get a hold of. Here are my tasting notes for your pleasure.

It’s probably worth noting that these wines were not necessarily transported in the most optimal conditions by professionals. They were shipped internationally via Fed Ex and may have suffered a bit in the journey. Take this into account when reading the tasting notes below.

2005 Grover Vineyards Sauvignon Blanc, Nandi Hills, India
Light gold in color, this wine as a nose of yellow apple and lemon aromas. In the mouth it offers a smooth texture with bright citrusy flavors of lemon juice and lemon zest with a hint of yeastiness, and a thickness that betrays some oak aging. The vineyards sit at 2000 feet elevation. 8/8.5

2006 Sula Vineyards Chenin Blanc, Nashik, India
Light gold in the glass, this wine has a pleasant nose of honey and dusty, yeasty aromas of hearty bread. In the mouth it offers decent balance with honey, caramel, and yellow apple flavors wrapped in a smooth, silky body. Decent finish. 8.5

2006 Grover Vineyards Rose of Shiraz, Nandi Hills, India
Medium bright pink in the glass, this wine has a very distinct nose of candied apples. In the mouth it offers relatively simple flavors of red apple skin, which would be pleasant enough were they not to migrate to a very bitter acetone note in the finish, which effectively makes this a bit of an unpleasant quaff. 6.5

2004 Grover Vineyards “La Reserve” Red Wine, Nandi Hills, India
Medium garnet in color, this wine has a classic Cabernet Sauvignon nose of green pepper, plus some notes of artichokes. In the mouth the wine is relatively simple and one dimensional with straightforward flavors of cherry and leather, with. The finish falls well short of pleasurable. 7.5

2003 Grover Vineyards “La Reserve” Red Wine, Nandi Hills, India
A medium garnet color in the glass, this wine smells unfortunately of wet band-aids. In the mouth it offers simple flavors of tart cherry that end up wooden and blocky in the mouth, with a lousy texture and poor balance. Avoid this wine. 5.5/6

NV Satori Merlot, Nashik India
Medium ruby in color, this wine has a dusty nose that smells of wet dirt and vaguely of plums. In the mouth it has a hint of candied plum which is unfortunately immediately obliterated with the bitter, acrid taste of alcohol and acetone that linger with heat in the back of the throat until you very sincerely regret taking that last sip of wine. Avoid this wine. 5.5

2005 Chateau Indage Cabernet Sauvignon, Sahyadri Valley, India
Dark ruby in the glass, this wine has a promising depth of color and a deep nose of licorice aromas. On the palate the wine has flavors of candied plum and dried fruits, with light tannins, but very little to speak of in the way of body or texture. The flavors of the wine are shallow and thin, and lean towards the oaky. 6.5

In short, if you’re gonna experiment with Indian wine, stick to the whites rather than the reds. It’s important to realize that this is not necessarily a representative tasting of the wines of India, merely what we could get our hands on. I look forward to the opportunity to taste more someday.