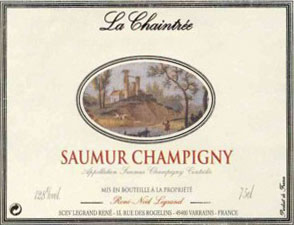 Lots of people I know have a “house wine” — some bottle that they buy in much larger quantities than any other wine and also consume in much larger quantities. A house wine is the inexpensive, drink-with-anything, because-I’d-just-like-a-glass, it-doesn’t-matter-if-I-don’t-finish-the-bottle, what-goes-with-day-old-pizza wine. In my opinion, every wine loving household should have one.

For a lot of people this is clearly the place that Two Buck Chuck holds in their kitchen. I personally prefer to spend between ten and fifteen dollars on my house wine, and I’m constantly picking up random bottles at that price point just to see when I’m going to discover the next greatest version.

The Loire Valley is one of France’s most diverse wine regions, especially in terms of the types of wine that it produces. The area surrounding the Loire River, which is the longest in the country and one of the least dammed in all of Europe, is, in fact, many distinct growing regions with extremely different climates. As the river flows from its eastern reaches in Sancerre to its mouth in Muscadet it crosses several dozen others appellations, the best known of which are Vouvray, Touraine, Chinon, Bourgueil, Savennieres, Saumur, and Anjou, which along with their fellows make the Loire the third largest region for AOC wines, and the second largest region for Sparkling wines.

The Loire is best known for its white varietals, of which Sauvignon Blanc and Chenin Blanc are the most famous, followed by the Melon varietal, which is responsible for the sometimes sparkling wine, Muscadet. Much lower profile (and generally less imported as well) are the regions red varietals, which include Cabernet Franc (sometimes mixed with a little Cabernet Sauvignon), Gamay, Pinot Noir, and here and there, a dash of Malbec.

Because the Loire is such a chilly region in general, an awful lot of these red wines are very difficult to get ripe, which means that there are a lot of Loire reds that taste green and bitter. For some, this flavor profile is part of the charm of the region, but for me, it has always been a turn-off. The existence of vegetal-tasting wines hasn’t stopped me from drinking Loire reds every chance I get, however, because there aren’t that many of them, and when they’re good, they’re really good. Like everywhere, there are some Loire producers that manage to make excellent wines no matter what the conditions.

This is the first wine I’ve had by Domaine Rene Noel Legrand, so I can’t possibly know whether they fall into this category, but they certainly have the reputation and the pedigree to do so. The Legrand family has been making wine from the same vineyards in the area for five generations. Since 1976, the estate has been under the guidance of René Noël Legrand, who took over from his father.

Legrand owns about 36 acres of vines that span the communes of Saumur, Dampierre, Chacé, Varrains and Champigny, which the family farms carefully by hand. The vineyards are a mix of red and white varieties, and the vines are on average 35 years old, with some of the oldest approaching 80 years.

Like many growers in the region, Legrand drops fruit during the summer (also known as a green harvest) to reduce the yield of the plants and allow the vine to ripen all its fruit to maturity. The vines themselves are already low yielding due to their age, and to the cover crops that Legrand plants between the rows in order to compete with the vines for nutrients.

The estate produces two reds, a wine made from a mix of vineyard sources, and this wine, which is from only their oldest vines. Made from 100% Cabernet Franc, this wine is aged for 14 months in neutral oak barrels before bottling.

Tasting Notes:
Medium ruby in the glass, this wine has a nice, homey nose of hazelnuts, redcurrant, and plum aromas. In the mouth it is smooth, and dry on the tongue, with a suede-like softness that matches cool fruit flavors of cherry and redcurrant with slightly deeper flavors of leather and a stony minerality. Great acid, a clarity of flavor, and the lack of any bitter tannins make this wine super easy to drink and a real pleasure from the first glass to the fourth.

Food Pairing:
This is such a food friendly wine it’s hard to imagine what it wouldn’t pair well with. Me? I’d love to drink a properly chilled bottle of this with a friend over a couple of Kobe beef burgers.

This wine is a brand new release and is not easily available online yet. It is imported by Beaune Imports in Berkeley, CA. Drop them a line if you’re interested in getting a hold of it.