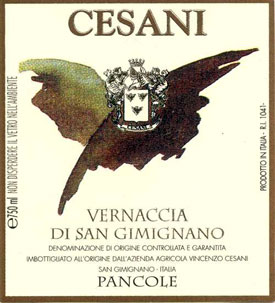 If someone ever held my feet to the fire and forced me to name just one group of wines that I’m most excited about exploring these days, I would certainly squirm, as my curiosity for learning more about all the wines of the world does not have limits. However I would probably break down eventually, and with some honesty say that no category of wines really excites me as much these days, from a pure learning standpoint, as the indigenous white varietals of Italy. Throughout that country, on small farms and in small villages, winegrowers and winemakers are working with the same grapes that their forefathers did hundreds of years ago, and they are some of the most unique and interesting wines I’ve had the pleasure of tasting.

Vincenzo Cesani’s family has worked the land in central Italy for as long as they can remember, but being able to own their own land is something of a novelty. Up until the 1960s or so, when it was formally abolished, a sharecropping system known as mezzadria operated throughout much of central Italy. Under this system families like the Cesanis were unable to own land and were forced to rent it from local landowners in small parcels and then pay for its use often with up to 50% of their total production.

Needless to say, when this system was finally done away with, many families jumped at the chance to settle down and own their own land. When Cesani was just a boy, his family moved from their roots in Marche to the sunny hills surrounding the picturesque San Gimignano in Tuscany where they purchased some farmland and began the joyful task of putting down roots.

At the time, the wine industry in Tuscany, especially in smaller towns like San Gimignano, hadn’t changed much from the old days. Much of the wine produced, especially white wine from the local Vernaccia grapes was never even bottled. It was sold out of casks with a spigot — when you wanted some wine, you brought a container of some sort over to your local winegrower and filled it up.

In 1964, by then a strapping young man, Cesani planted the family’s first vineyards in 1964. Over the next 30 years these initial vineyards have grown slightly to a still modest 22 acres, planted with primarily Sangiovese and Vernaccia with little bits of Chardonnay and the Bordeaux varietals.

San Gimignano is known for many things, but is famous for at least two: it’s soaring brick towers that look out on the Tuscan countryside, and the white grape variety known as Vernaccia. Pronounced “ver-nah-chee-ya” it may well be Italy’s oldest white grape variety. The poet Dante mentions it in the The Divine Comedy, suggesting that Pope Martin IV may have been consigned to purgatory for his gluttony, which apparently involved eating eels drowned in Vernaccia. It has certainly been loved by peasants and royalty for at least seven hundred fifty years, as it appears as a regularly recorded item in commerce as far back as the year 1246.

The rich history of the grape in Italy no doubt contributed to the honor of Vernaccia di San Gimignano being the first grape variety in Italy to gain DOC status after the system was established in 1963.

These days Cesani works his farm with the help of his daughter Letizia, and the wine is made with the assistance of the famous Paolo Caciorgna, one of Italy’s top enologists, and also a transplant from the Marche region, just like Cesani.

Under Caciorgna’s hand, the winery has become relatively famous for its Sangiovese wine called Luenzo, which has garnered the Gambero Rosso Tre Bicchieri award, among other accolades. Despite the fame and money associated with big Tuscan reds, however, Cesani remains dedicated to the humble, local Vernaccia. It seems to be both a matter of tradition, as well as taste.

The grapes for this wine come from Cesani’s sloping vineyards that sit higher than nearly everyone else’s land in the region. Indeed, some of Cesani’s vineyards (those devoted to his red wines) are simply too high and chilled from the wind for Vernaccia to thrive on. Those that are planted with this grape, are right on the edge of suitability — both in terms of their temperature and exposure, as well as their red-friendly clay and limestone soil — which may contribute to the distinctive character of the wine.

Tasting Notes:
Pale gold in the glass this wine has a fresh, bright nose of apples, pears and a beautiful herbal quality that evokes dried bay leaf and other aromatic herbs. In the mouth it is lively and juicy, with crisp pear and apple fruit characteristics wrapped around a nice mineral backbone. There are some herbal qualities in the finish as well, which keep the wine from being austere or too linear. This wine would be a pleasure to drink chilled on a hot dusty day.

Food Pairing:
The lovely fruit and mineral qualities of this wine make it a sure bet for pairing with grilled seafoods of all kinds. I’d love to drink it with a plate of grilled anchovies and some fresh country olives and bread.