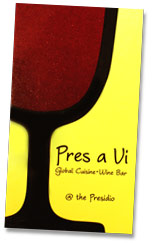 There have been only two times in my life when I seriously wished that I worked at Industrial Light and Magic. The first was a period of about 10 years between the ages of ten and twenty, when I really thought I wanted to get into special effects as a career. The second was when I saw the wine list at Pres a Vi, and I had an immediate fantasy of being able to wander down after work to share a bottle with friends.
Pres a Vi, a sister restaurant to the Va de Vi bistro in Walnut Creek, and also under the direction of Chef Kelly Degala, is one of the newest additions to the growing ranks of dining options in the revitalized Presidio, and it sits in the Letterman Digital Arts Center that also happens to house the San Francisco headquarters of LucasArts. In addition to housing bronze statues of Yoda and hundreds of talented special effects technicians, the Presidio now has its own wine bar.
The folks who built Pres a Vi must have counted on many hundreds of those technicians also being wine lovers, because they built big from the get go. There are no shortage of seating options at this massive restaurant. Want to sit outside? Grab a table on the large heated patio, or lounge on the outdoor benches with your glass of wine. Just feel like a quick drink after work? Take your pick of the long sweeping bar or the high seating in the front cocktail area. Then there are the dozens of tables and booths in each of the two dining rooms, and a third large dining room is available for private events as needed. My favorite place to sit, however, is at the large (and I do mean large — there are probably 30 seats) communal table that sits just in front of the large open kitchen. On your way to wherever you end up sitting, you’ll want to slow down as you walk past the built in wine-room, if only to gawk at the (clichéd) expensive and big bottles they have on display.
While the restaurant shows a bit of pretense in its wine display and perhaps overly dramatic interior, the wine list itself is pure pleasure. Not only is it almost entirely free of the predictable, mass market, easy-to-get wines from around the world, it seems to deliberately feature wines from off the beaten path. This is true of both the by-the-glass list, with nearly fifty wines available by the 3-ounce taste or 6-ounce glass, as well as the extensive bottle list.
One of the consequences of the fact that the wine list is so good, however, is that most of the glasses run upwards of $10 apiece. Wine lovers in groups of three or more would do better to buy bottles off the list, which features a relatively comprehensive selection of wines in an incredible range of prices, from $27 to $850.
While the bottle list seems to be in flux, with some conspicuous gaps (only three white wines from Austria, but several dozen from Germany?) it ranges far and wide and is studded with some lovely wines which are often at very reasonable prices.
Those who want to eat while they drink, or hang around for dinner after drinking some wine will doubtless find 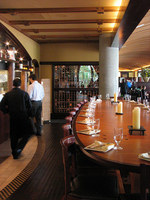 something tasty on Pres a Vi’s slightly confusing three-tiered menu. While the concept of the restaurant is supposed to be “small plates” make sure that you’re clear just how small the plate is before ordering, as it can be a few slices of sashimi, or a whole steamed fish that can feed two. OK, so the steamed fish appears on a section of the menu marked “Mains” but the price differences between those items in the mains and the rest of the small plates aren’t so large.
If you can get over the fact that everything seems just a little more expensive than it should be, there’s some very tasty food to be had with your wine. Described as a menu of “global tastes,” which is apparently more hip these days than “fusion,” there are Thai, Spanish, Japanese, Filipino, Peruvian, Italian, and Chinese influenced dishes, among others.
When it comes to service, unfortunately, the restaurant just hasn’t quite figured it out yet. Perhaps it’s the sheer size of the place, but servers don’t seem to have figured out who is responsible for which tables, and I have observed (and personally experienced) diners trying to flag down the waitstaff in order to place an order or even get water glasses filled.
Unfortunately, the staff also don’t know very much about the wines on either the by-the-glass list or the bottle menu. Those working behind the bar are better, but serious wine lovers will want to ask for one of the managers or for the sommelier, who is there most nights of the week.
The atmosphere at the restaurant seems to be mostly about business, and indeed, it strikes me as a great place for a business dinner, especially if you’re on an expense account. The few times I’ve been there it has seemed to be filled with mostly post work businesspeople as well as some evening diners. I haven’t been yet on a Friday night, so it’s unclear if it ever develops into a “scene.” I certainly haven’t seen it descended upon by hundreds of special effects technicians. Although that might be a lot of fun.
Despite service problems and being slightly pricey, Pres a Vi is certainly a gem of a wine bar, if only on the merits of a fabulous selection of wines coupled with very good, even excellent food. I only wish I had a reason to be over in the Marina more often. Anyone know George Lucas?
WINE LIST:

Pres a Vi Restaurant and Wine Bar
One Letterman Drive
Building D, Suite 150
San Francisco, CA 94129
415.409.3000
info@presavi.com
Open for lunch during the week from 11:30 AM to 2:30 PM, and Brunch on the weekends from 10:30 AM until 3:00 PM. Dinner hours start at 5:30 PM and go until 9:00 PM Sunday through Tuesday and 10:00 PM from Wednesday through Saturday. Reservations are recommended for dinner, but those just looking for a glass of wine, or a quick nibble can usually find a seat.
Valet parking is available at both lunch and dinner, and there are nearby parking lots behind the restaurant, which can be a little tricky to find, as it does not front a major street. Rather it sits back on a lawn that is accessible via a pedestrian walkway off of Lyon Street.
Suggested attire is business casual or elegant casual.