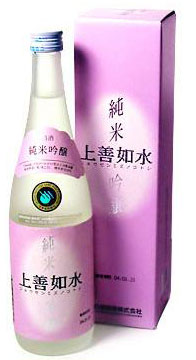 Shirataki brewery was founded by an innkeeper on a road through the snowy Mikuni mountains in 1855, a little more than a year after U.S. Commodore Matthew Perry and his black ships forced Japan to open to the rest of the world. The name of the brand, “Jozen mizunogotoshi,” means roughly “the way of living is just like water” and comes from an interpretation of Chinese philosopher Laozi. Unusually for the chauvinistic sake industry, Shirataki maintains a research section staffed entirely by women.

That’s nice. But that’s not why I picked it. I wanted to kick off my humble contributions to this site with something special: a sake that would curl the toes of wine drinkers in a good way, and also one that’s pretty easy to find.

When I was in Japan last month, I almost didn’t order this sake because it is so commonplace in the U.S. But on my last night, I was staying in a ryokan (traditional hotel) in Echigo Yuzawa, just four minutes from Shirataki brewery. The ryokan’s dinner, which was fabulous, was made entirely of local ingredients: good timing, because late August is towards the end of harvest season in this mountainous ski region about 200 km north of Tokyo. The clear “dobin mushi” soup — fragrant like warm wet earth in spring, pleasingly salty, with flavors of fresh sweet corn mingling with river shrimp and mizuna (Japanese parsley) — was one of the best dishes I had on my whole visit. Swooning over the soup, I asked, “What’s the sake produced closest to this ryokan?” and ordered the Jozen mizunogotoshi before I even realized how non-obscure it is.

Turns out that’s a good thing, because I’m going to want this again.

The characteristic mouthfeel of this sake comes from Echigo-Yuzawa’s soft, clean water which filters down from the heavy snowfall on the mountains. Niigata prefecture built its reputation on clean, dry sakes, but that’s a stylistic choice: the quality of water and rice there allows brewers to make wildly flavorful sakes like this if they choose.

SMV, or sake meter value, is a measure of dryness, and ranges from about -3 to about +12 (there are more extreme exceptions). The higher the number, the drier the sake. Zero is actually sweet; I find about +2 to be neutral.

Tasting Notes:
This sake is not delicate: it smells like overripe, even slightly rotting fruit: peaches and melons, perhaps. I was even reminded of durian, the infamous southeast Asian fruit that’s banned from many hotels for the smell. I actually like durian, though, and I associate overripe stone fruit with the bounteous end of summer, so the aroma is a positive for me.

In the mouth, it’s potent, ripe and fleshy, with overripe peach and ripe durian flavors initially and a hint of cocoa on the finish. While the fruit flavors recall Riesling more than any other wine, this is a sake for drinkers of bold reds — it’s full-bore, lots of fruit, with a rich mouthfeel.

Food Pairing:
The bold flavor of this sake means I wouldn’t suggest it with the most delicate sushi. In fact, it was great with the ryokan’s meal because of the many vegetable dishes served, which is rather unusual for Japan. Since that worked out, I’ll suggest it: try it with vegetable stew, or perhaps onion soup. My other suggestion is a favorite dish: mackerel simmered in miso.

Overall Score: This is the first sake I’ve rated on Alder’s 10-point scale. I’m going to give it an 8.5.

You can buy this sake at True Sake or Nijiya Market in San Francisco, and it’s on sake and wine lists around the Bay Area. If there is an Asian food store in your area, check to see if they have this. If not, you can order it online.

About W. Blake Gray: W. Blake Gray has written about wine for publications including the San Francisco Chronicle and Food & Wine magazine. A resident of Tokyo for most of the 1990s, he speaks Japanese and has written about sake and Japanese food for Wine & Spirits magazine and the in-flight magazines of Japan Airlines and United Airlines. He likes Russian River Valley Pinot Noir, Yamagata prefecture junmai ginjo, the Oakland Athletics and “The Shield,” and has not yet been caught smuggling sparkling wine into movie theatres, despite the telltale “pop.”