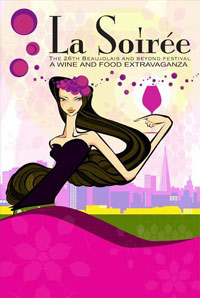 Every year on the third Thursday in November, the French have a tradition of celebrating the harvest by drinking Beaujolais Nouveau, the very young wine made from the first pressings of Gamay grapes picked only a month or two earlier. These “traditional” celebrations often tend to be drunk-fests of the first order, made all the worse by the fact that they involve wine that is quite close to undrinkable in my personal opinion.

This year, there’s may be more or less to celebrate depending on your point of view. The harvest in France seemed to only barely recover after a spate of bad weather and mildew this summer. But recover it did, and there will be wine, though its quality will be extremely variable.

And here in San Francisco, the harvest celebration for Beaujolais Nouveau takes on a much more civilized aspect when thrown by the French American Chamber of Commerce, as they have been doing for decades. However, it’s not on the third Thursday (it’s on a Saturday), and perhaps best of all, they pour more than just Beaujolais Nouveau wine.

Every year, the Nouveau release date is used as an excuse to celebrate the wine, the harvest, and in fact, all things French. Something certainly worth doing, especially as memories of freedom fries linger in our collective unconscious.

Held at the Hyatt Regency in downtown San Francisco, “La Soiree” as it is called, will be an evening of wine tasting, food, and music. The tasting is the highlight of the evening, but the event begins earlier in the day. From 1:00 PM to 5:00 PM there is a marketplace of holiday goods with a French flair to browse through; a silent auction of various prizes; and a special sparkling wine tasting from 2:30 to 4:30 which they say is only open to “professionals” though I’m not sure exactly what that means.

The main wine and food tasting event gets started around 5:30 and goes until 9:30 or until the DJ stops spinning. There aren’t a huge number of wines on offer, so this isn’t one of those events to attend in order to educate your palate, but I have received reports from readers that it’s a relatively good party, and so may be worth going to on those grounds, rather than with wine tasting notebook in hand.

Tickets are $60 for most folks (who don’t happen to be members of the French American Chamber of Commerce) if purchased in advance online. Tickets will also be sold at the door for $70.