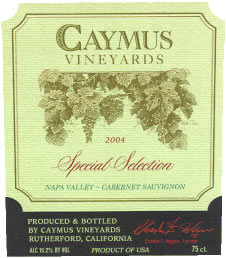 To say some wines need no introduction is both a truism and also a disservice. There are indeed some wines, that through hard-won success, have built themselves into a globally recognized brands. These wines have names so well known that they can become synonymous with luxury, greatness, or even a type of grape. Yet the power of a brand also means that many people only know it superficially, sometimes even second hand.

Caymus Vineyards may need no introduction, because the phrase “Caymus Cabernet” is legendary at this point. Like Silver Oak, Caymus is a name that will be instantly recognized by anyone used to perusing the expensive Cabernet section of fancy restaurant wine lists.

But behind whatever associations the name may bring to mind, there’s a story, a family, and a vineyard behind every major brand. Ultimately these are the things that are most meaningful, no matter how well known the name that precedes them.

When it comes to names, the most important one to remember for Caymus Vineyards is Charles. But that’s an easy task, since that’s the name that at least one man at Caymus has held for the past 100 years. Before there was Caymus, there was the Wagner family farm — a small plot of land in Napa that Charles Wagner purchased with his life savings after fleeing the devastating San Francisco earthquake of 1906. This first Charles, an immigrant from Alsace, planted the same things that everyone planted in those days to survive: a bit of everything. And for good measure, he planted some grapes, too, and by 1915 had started the Wagner Winery — just in time for Prohibition, which put a damper on the first Charles’ dreams of winemaking.

But by 1943, there was another Charles (Charlie) Wagner in the family, and this one shared the foresight of his namesake, to the point of purchasing some additional orchard land in the heart of the Napa valley. By the early Sixties, there wasn’t much demand for plums and nuts, but it looked like wine grapes might be able to sell. So like many of the early pioneers in the valley Charlie Wagner planted vineyards — and in them he planted the same thing that everyone planted in those days: Pinot Noir and Riesling.

But Wagner also happened to have a friend up the road who was making some pretty good wine out of Cabernet Sauvignon, and when he was offered some cuttings from the vineyard, Wagner leaped at the chance.

Everything else, as they say, is history.

The winery was dubbed with a name that appeared on the ancient land grants that ceded the Napa Valley back to the United States: Rancho Caymus. And the vineyard was quickly replanted to Cabernet Sauvignon when it became clear that the grape thrived in the rocky soil of the farm’s 60 acre plot.

By 1972 or thereabouts, another Charles (Chuck, this one was called) had been born, and the family realized that there was more money in making wine than in just selling grapes, and by 1975 they had brought on the young Randy Dunn to make their wine. That year, the winery also produced the first vintage of a wine they called Special Selection, taken from the very best lots of fruit they harvested from their vineyards.

For the next 10 years Dunn cranked out what by any account were excellent wines, and by the time he left to start his own winery in 1984, Chuck Wagner was an accomplished pupil that was more than capable of carrying on where Dunn left off. In the next 15 years Caymus went from excellent to what you might call epic success, winning overwhelming critical acclaim from nearly all fronts, cementing the word “Caymus” with the word “Cabernet” to the point that high-end wine lovers had difficulty saying one without the other. If my memory serves me, Caymus Special Selection is the highest scoring Napa Cabernet ever, based on average score by vintage over its three decades of production.

From it’s humble beginnings and 240 case production, Caymus has grown to well over 80,000 cases of wine, including its various sub brands like the Conundrum white wine and the relatively new Belle Glos label for Burgundian varietals.

Despite its success, Caymus remains family run, and still stands for Cabernet. The Caymus name graces only two wines just as it did in 1975, the family’s standard Cabernet, and the this Special Selection. The wine is made from 100% Cabernet Sauvignon from the best parcels of the family’s vineyard on the valley floor in Rutherford, along with some hillside fruit purchased from select vineyards around the valley. It is fermented in French oak (of which I am not sure what percentage is new) for approximately 30 months before bottling. Approximately 8,000 cases are made.

Tasting Notes:
Dark ruby in color, this wine has a classical cherry nose with high tones and floral notes that lean towards candied. In the mouth, the first word that comes to mind is “intense.” The wine has strong, even extracted, cherry flavors with floral aromatics continuing as the wine slips across the palate. Midway across the tongue a deeper set of flavors that center around espresso beans kick in, along with sweet tannins that veer a little towards the bitter end of the spectrum in the moderate finish. A solid wine, but not fully resolved. A few years in the cellar might do wonders.

Food Pairing:
I’d enjoy drinking this wine with some honest Carolina pulled pork sandwiches. Since the wine has an ever-so-slightly sweet edge, I think these salty and slightly spicy sandwiches would do just the trick.