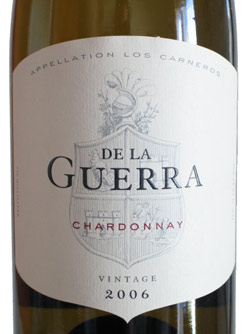 California’s Carneros AVA (American Viticultural Area) is unusual in many respects. It’s most well known eccentricity is that it exists divided between two other AVAs — Sonoma County and Napa Valley. One of its other oddities, at least for me, is the fact that the best wines from this region are invariably made by producers who do not actually have wineries there. Many have argued with me on this point, but I maintain that, overwhelmingly, this is true.

There is perhaps one striking exception to this belief of mine, and it’s name is HdV, or Hyde de Villaine Wines. Not only does this winery clearly distinguish itself for the quality of its wines, it is a remarkable combination of talents and history that embodies the old cliché, “the best of both worlds.” HdV is a joint venture between two luminaries of both the new and old world of Burgundy: Hyde Vineyards and the Villaine family of Burgundy.

Lovers of California wine, especially Chardonnay and Pinot Noir, are generally well acquainted with Larry Hyde, or at least his legendary vineyard in the Carneros region of Napa. Hyde vineyard fruit has had a starring role in some of the most award winning wines of the past decade, from labels such as Paul Hobbs, Patz & Hall, Kistler, and Ramey.

Burgundy fans will likewise be familiar with, if not the name of Aubert Villaine, then certainly his day job, which is being co-director of Domaine de la Romanee-Conti (he also happens to have his own vineyard as well — A. & P. de Villaine).

The connection between Hyde and Villaine began with a real marriage — Villaine married Larry Hyde’s cousin Pamela — and in 1999 it became a marriage of interest in producing exceptional wines that would combine a French interpretation of some of California’s finest fruit. Larry Hyde would provide the fruit, and Villaine would provide the funding and the philosophy, and then a couple of years later, the skills of young winemaker Stephane Vivier.

Vivier cut his winemaking teeth in some of Europe’s finest vineyards throughout Pomerol, Meursault, and Chassagne-Montrachet, before coming to California. His expertise with both Burgundy and Bordeaux made him an ideal candidate for the HdV portfolio of wines, which includes Chardonnay, Syrah, and a Bordeaux Blend called “Belle Cousine.”

All of the wines are made from fruit grown in the sustainably (organic without the certification, I believe) farmed Hyde vineyard at the entrance to Napa valley. The 150 acres of vineyards slope back away from San Pablo Bay on an old floodplain over sedimentary stone, crisscrossed by ancient streambeds. Like the rest of Carneros, these sloping flats of shallow, loamy soil receive far less moisture and much cooler (often wind-enhanced) temperatures than surrounding areas.

The grapes for this wine come from some of the younger vines in four different blocks throughout the vineyard, each planted with a different clone of Chardonnay. Yields were restricted by dropping fruit (especially those clusters that were scorched by the heat spikes in the summer of 2006), and the remaining grapes were harvested by hand after fall delivered several weeks of typical Carneros fog and sun.

The grapes are pressed gently, for a long period of time, and the wine is fermented in a combination of stainless steel, a large ancient oak foudre, and some new French oak barrels. It is bottled without fining or filtration of any kind.

The wine is named after the original family name of Hyde’s ancestors, and both this wine, as well as the other HdV bottlings, bear the crest of the de la Guerra family, which can trace its California winemaking roots back to the middle of the 19th Century.

While only in its 7th vintage, HdV has clearly established itself as one of the finest operations in Carneros, and is making wines of tremendous quality and personality.

Tasting Notes:
Pale green-gold in the glass, this wine has a nose of striking minerality wrapped in scents of buttered popcorn and hints of herbal tea. In the mouth it is gorgeously smooth on the tongue with taut, integrated flavors of pear, exotic citrus, and white flowers. Underlying, or perhaps soaring over these perceptions of fruit is a steely mineral aspect that carries through the long finish of the wine, beautifully married to the faintest hints of vanilla and oak. Certainly one of the better California Chardonnays I have had in some time.

Food Pairing:
This wine is versatile and broad in its food compatibility, but if I were to pick a dish to serve with it, it would be something like this roasted halibut in chard leaves with lemon-thyme butter.