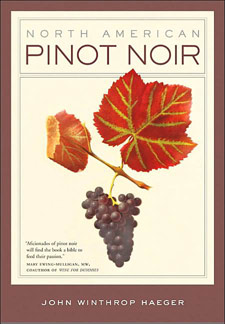 If I were a grape, and someone wanted to write a book about me, I’d pray that someone was John Winthrop Haeger. Haeger’s singular work, North American Pinot Noir, is a model of precise scholarship translated into cogent and flowing narrative. Thankfully devoid of the purple prose syndrome so prevalent in writing about Pinot noir (for example, Oz Clarke calls Pinot “seductive, sultry, steamy, sinful if possible,” while Serena Sutcliffe says that “to unlock the flavors and smells of fine Burgundy is to attain a hedonist’s nirvana.”), the volume should serve as the prototype for sober, in-depth wine writing and belongs in every wine-lover’s library.

North American Pinot Noir was published in 2004, the same year the Pinot-centric movie Sideways was released. Since then, the relevancy and value of the book has, if anything, increased as the interest in, demand for, and production of Pinot noir in North America has exploded.

Want to learn when “pinot” was first used to describe grapes? It was in the year 1394, says Haeger on page 14. Need to understand what whole-cluster fermentation is, and why someone would want to do it? There’s a clear description on page 160. Ever wonder what a Wädenswil clone is? The history and terminology is discussed on page 140. Worried about the fact that anthocyanins in Pinot are not linked to glucose units? Haeger explains why this is a good thing for wine drinkers on page 173.

If these examples make it sound like North American Pinot Noir is pedantic or tedious, it isn’t. Writing with clean, clear, and unpretentious exposition, Haeger covers every relevant aspect of North American Pinot noir. As I went through his pages, I kept thinking of subjects that he surely would not cover—technical stuff, like how much diurnal temperature variation can affect flavor characteristics, or what role seed lignification should play in judging ripeness. But each time I came up with one of these yes-but-what-about subjects, I was foiled: Haeger covers it.

And he covers it equally well for consumers and specialists. With chapters on nearly every aspect of Pinot Noir in America and Canada (yes, Virginia, I can personally testify there is good Pinot noir in British Columbia), plus a detailed and well-researched section listing more than 70 recommended producers, even casual Pinot lovers can dip into the book at any point and learn something interesting.

In the section on winegrowing, you’ll learn just why vineyard site selection is so important to Pinot. In the winemaking chapter, you’ll appreciate the myriad of decisions the winemaker must make in working with “the heartbreak grape”. In a discussion of pricing, readers will understand why good Pinot noir is so expensive. Advice on cellaring will help ensure long-lived bottles, and the section on Pinot food pairing is one of the most cogent examinations of the subject I have yet seen.

On the grounds of regional pride (I’ve been writing about Oregon Pinot noir since 1999), I must quibble with the relative balance of treatment Haeger gives to Oregon and B.C versus California. In the chapters on individual growing regions, Oregon is given just over six pages of coverage, and the Okanagan Valley takes up three pages–against 35 pages devoted to California. Haeger says the Willamette Valley “contains the largest planted surface of Pinot Noir in North America”—yet he devotes more pages to describing “The Southern Central Coast” of California then he does the Willamette Valley. In the section listing “Key Producers,” California merits 52 listings, while Oregon gets a mere 16, and B.C. only one.

My own regional bias aside, Oregon’s role in the development of North American Pinot noir has been substantial, and many advancements in Pinot production were pioneered in Oregon. Of course, I have to be realistic: California’s sheer size, whether measured by Pinot plantings, Pinot wineries, or Pinot sales, means it will inevitably dominate any discussion of the varietal on this continent. Even so, a good case could be made that it was Oregon winemakers who blazed the trail of market respectability for any American Pinot Noir–from the early recognition of The Eyrie Vineyard’s wines (well documented by Haeger), to the efforts of David Adelsheim to import new clonal stocks (not so well described by Haeger).

But these complaints are all minor—more a matter of emphasis than of completeness or accuracy. The fact is, Haeger has produced the definitive study of North American Pinot noir. But definitive for how long? Like the ever-mutating grape itself, the Pinot-scape is changing rapidly. There are many more producers today than there were in 2004, much more money has gone into new Pinot plantings and winery developments throughout the region (traveling through the Okanagan or Willamette Valleys today will give you a visceral sense of the change), and even the economics of Pinot-making are fast-shifting (Oregon, for instance, has more good $20-and-under Pinots today than when Haeger was writing).

Cole Danehower is the co-publisher and wine editor of Northwest Palate magazine, a consumer publication covering the wine, food, and culinary travel bounty of Oregon, Washington, British Columbia, and Idaho. He received a James Beard Journalism Award for his previous publication, the Oregon Wine Report; writes frequently about Northwest wines for several publications; and blogs as the Inspired Imbiber.