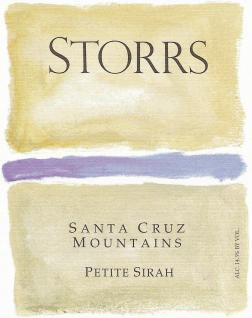 I don’t know who said it, but in the last few years I’ve heard it uttered that the Santa Cruz Mountains AVA is quite possibly the most underrated wine growing region in California. I’m not sure if I’m confident or encyclopedic enough in my knowledge of California wine to affirm that statement, but in my experience there’s definitely something to that claim.

The winegrowers and winemakers of the Santa Cruz mountains suffer from the same obscurity that a lot of winemakers in other AVAs do throughout the state, simply by virtue of not being in Napa or Sonoma. I also privately think that having the name of the lazy beach town in the name of the region causes some people to dismiss the whole idea of growing good grapes so close to a bunch of flip-flop-wearing surf bums.

In reality, the Santa Cruz Mountains appellation is a large and diverse winegrowing area that spans three counties. Despite its geographical coverage, however, it is sparsely populated with vineyards and wineries — containing only about 50 wineries and only about 1500 acres of vineyards under cultivation.

Whatever its association (imagined or real) with the laid-back town that shares its name, growing wine in the appellation is not a particularly easy task. The mostly hillside vineyards are anchored in shallow soils, and subject to quite a few extremes of weather, depending on where they are situated, from chilly fog to blazing sun, and everything in between. Of course, many grapes do well under the stress such climactic conditions provide, and the regions generally cooler aspect makes for generally very nice ripe fruit without the sugar spikes (and correspondingly higher alcohol levels) that warmer regions must grapple with.

One of my long-standing favorite producers in the Santa Cruz Mountains is Storrs Winery. They are one of my favorites not because they make wines that I or others score off the charts, but simply because they consistently make great tasting, authentic wines at humbly reasonably prices.

Storrs is a small family outfit that has historically made wine from fruit sourced all over the Santa Cruz Mountains and Central Coast. Owned and operated by Stephen Storrs and his wife Pamela Bianchini-Storrs, the label started small, but got off with a bang: winning gold medals at the SF Wine Competition for their very first vintage in 1988. The UC-Davis-trained couple ” he with a degree in Viticulture and she with a degree in Enology (winemaking) ” make small quantities of high-quality wine with great care.

Recently the Storrs have planted their own estate vineyards, which will gradually replace their fruit purchased on contract.

This wine is made from fruit grown on the slopes of Mount Madonna, which rises up to the west of Gilroy. The vineyards are on the Pacific-facing side of the mountain and benefit from the cool maritime influence. Surface temperatures rarely get above 80 degrees during the summer, making for slow maturation of the sun-loving Petite Sirah grape. The vineyard sits on an ancient riverbed of gravelly soil, and generally yields less than two tons of fruit per acre. The grapes are picked by hand, totally destemmed, and fermented at relatively low temperatures in small lots without crushing, and with lots of hand punchdowns (mixing of the juice and berries). This all has the deliberate effect of managing the tannin levels of this beastly, tannic grape. The wine is aged in a combination of French and American oak for about 14 months before bottling.

Tasting Notes:
Dark, inky garnet in the glass, this wine has a nose of black and blue fruits with distinct notes of cassis and wet earth. In the mouth it is remarkably smooth, and relatively light-bodied (emphasis on relatively) given the variety, with cool flavors of blackberry, black cherry, and mixed spices, and beautifully restrained tannins that support a long finish.

Food Pairing:
Despite the generally accepted friendliness between red wine and chocolate, there aren’t a lot of wines that I think really do go well with chocolate, but this is one of them. I’d drink the remains of my glass with a chocolate pot-du-creme any day.

Overall Score: somewhere between 8.5 and 9

This wine may be tricky to find for sale online.