Book Review: At Home in the Vineyard by Susan Sokol Blosser 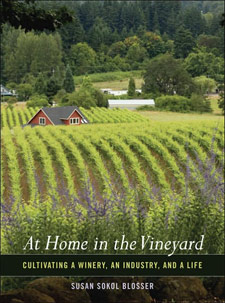 Oregon’s Sokol Blosser Winery prides itself on a number of “firsts” it has scored over the years, for everything from its wine to its architecture. Now co-founder Susan Sokol Blosser has written the first account of the rise of Oregon wine by a pioneering industry insider, and it’s a good one.

When Susan and her husband, Bill (the whole scheme was his idea) planted their first vines in 1971, they had none of the relevant skills and experience—no background in growing grapes, making wine, or running a business. They, and a lot of other people in that counter-cultural era, were simply drawn back to the land. They weren’t the first to place a bet on Pinot Noir in Oregon’s Willamette Valley, but they did jump in at a time when the entire “industry” could meet in someone’s living room.

Three decades after they bottled their first wines, Susan Sokol Blosser is president of an operation that pumps out well over 100,000 cases of wine a year; Oregon has nearly 300 commercial wineries; Bill is out of the picture; and the winery is in the process of being passed on to their children. The saga includes launching the venture on a shoestring, then financing it through family ties with strained results; dealing with phylloxera and with neo-Prohibitionism; helping launch the International Pinot Noir Celebration and Oregon’s LIVE program for sustainable viticulture; and the struggle to sell first Pinot Noir and later the wildly successful Evolution white blend. On the personal front, there are three children, two unsuccessful runs for the state legislature, a divorce and a new marriage to winemaker Russ Rosner.

It’s a lot to pack into a little over 200 pages. In the book’s introduction, Sokol Blosser says she kept asking herself if this was going to be a wine book, a business book, or a memoir, and decided it had to be all of those things. Inevitably, there are shortfalls on all three counts, missing pages you wish were there. As a business book, it’s a case study of one winery, with only brief nods toward the other players who built modern Oregon wine. As a memoir, there’s not a great deal of introspection—with the exception of some interesting observations about the progression of her own understanding of feminism.

Perhaps most surprising, there’s not a great deal about wine in here—at least not much rhapsodizing about the magical qualities of Pinot Noir and the drama of trying to capture them in a bottle, the sort of semi-purple prose one might expect in a Pinot book. Sokol Blosser isn’t a winemaker, nor is she by training a writer, so her tack doesn’t exude the drama of, for example, Marq DeVilliers’ Heartbreak Grape, the classic account of Josh Jensen’s battle to tame Pinot Noir high on the limestone slopes of Mt. Harlan.

Still, it’s an impressive and well-told tale. The rise of Oregon wine is beginning to generate a small body of books that go beyond tasting notes and tour guides. At Home in the Vineyard is a solid addition to that literature.

Susan Sokol Blosser, At Home in the Vineyard: Cultivating a Winery, an Industry, and a Life, University of California Press, 2006, $16.47 (hardback).