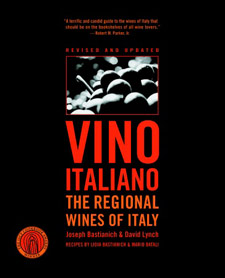 With dozens of wine regions, hundreds of grape varieties, and several overlapping classification systems, Italian wine is not a subject for the faint of heart. The authors of Vino Italiano certainly have the credentials to write an authoritative account. Joseph Bastianich co-owns (with Mario Batali, who lived and cooked in Italy for some years) five Italian restaurants and an Italian wine shop in New York City, as well as owning two Italian wineries, one in Toscana, another in Friuli; David Lynch is the wine director at one of these restaurants and a prolific wine writer. Each has won a James Beard Award for achievement in the field of wine.

Together they have produced the best reference book on Italian wine to come along since Burton Anderson’s out-of-print The Wine Atlas of Italy.

Vino Italiano has three broad sections: a brief, 20-page introduction to the history, regulations, and grape varieties of Italian wine; a region-by-region account of local wines and customs, including food; and “The Data,” a uniquely useful set five appendices including an annotated list of the 350 “authorized” grape varieties grown in Italy. There are also a useful bibliography and a brief index.

Each of the 19 regional chapters (two of the 20 regions discussed are combined in a single chapter) opens with an engaging, evocative anecdote that recounts an authors’ a personal experience. The following material surveys the major wines produced in the region, including commentary on recent winemaking history and developments, quantities produced, evaluations of the general quality of each type of wine made, and identification of the region’s more important producers. Then comes a section of “Fast Facts” packed with information about the region, a list of the main varieties of grapes grown there, a designation of the top vintages from 1980-2004, advice about where to taste the region’s wines, and recommendations for three specific bottles of each major wine type to use in your own comparative tastings. The final section of each chapter offers a brief summary of the major foods and typical dishes of the region and presents a detailed recipe along with a recommended wine. (Recipes are attributed to either Lidia Bastianich—Joseph’s mother—or Mario Batali.)

Vino Italiano is one comprehensive book—so much so that you’ll never make your way through it in a single sitting, and wouldn’t want to. Still, it reads very enjoyably, makes people and places come alive, provides enlightening commentary, and offers useful guidance for planning your wine tours of Italy or of your local wine shops.

There are, naturally, some oddities. The authors emphasize the regional specificity of all things Italian, but neglect to explore how the differences from area to area within each region can be equally dramatic. The identification of “Top Vintages” is sometimes at variance with other Italian publications, such as Vini d’Italia published by Gambero Rosso and Slow Food Editore—but then, what’s more normal than differences among wine experts? The identification of Edoardo Valentini as “Abruzzo’s only real star among private vintners” ignores the international attention and the awards won by the wines of Gianni Masciarelli. On the food front, you may come away with the mistaken impression that the black (summer) truffles of Umbria are very much like the white (autumn) truffles of Piemonte (p.238), or that the Alto Adige’s speck is “smoked bacon” (pp. 79 and 94) rather than the region’s famous version of smoked ham.

Even though there may be some devils in its details, the addition of this book has significantly upgraded the reference section of my Italian wine library.

After thirty-some years as a professor at UC Berkeley, Bill Rohwer and his wife, Carol, started in 2002 West Coast Fine Wines, a two- person firm that represents selected California wineries to many of the best restaurants and wine shops throughout Italy.