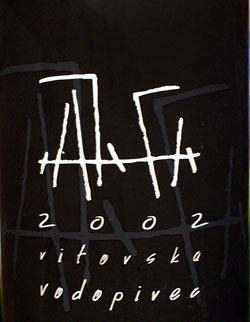 In the far Northeastern corner of Italy there lies a countryside that is better defined by wine than by any geopolitical affiliation. The far eastern edge of the Friuli-Venezia Giulia winegrowing region has been a member of many countries and many empires, and by now its people are used to living in different countries every three or four decades, it seems. The one constant in this area of small picturesque valleys and numerous natural limestone caves (good for hiding from whoever your present occupiers are), has always been wine, and in particular, white wines, some of which I will unabashedly say, rank among the worlds greatest.

The cultural hub of the region is the border city of Trieste, which literally straddles the border between Italy and Slovenia, as do many of the vineyards in the area surrounding the city known as the Carso. This eroded plateau, which sometimes plunges steeply towards the sea, is home to many small winemakers whose families have been farming vineyards in the area for hundreds of years, while the lines of maps were drawn and redrawn around them.

The Corso, like Friuli in general, is packed with wine varieties that most of the world has never heard of. Italy as a whole is known for its wealth of indigenous grape varieties, and Friuli in particular is home to scores, perhaps even hundreds of them. These varieties, many of which are white, are a true national treasure as far as wine lovers are concerned, as they quite often fail to resemble any other wine grapes in the world when it comes to flavors, textures, and aromas.

Vitovska is one such variety. Found nowhere else in Italy but Friuli, and rarely found outside of the Carso region, this vine is about as far off the beaten path you can get when it comes to grape varieties (a good measure of which is always whether it appears in the Oxford Companion to Wine, which it doesn’t). Characterized by small greenish-gold berries it is apparently quite a hardy vine, used to cold winters, dry hot summers, and blustery winds. Perhaps not unlike the farmers of the Carso.

This wine is produced by a small family run winery known as Vodopivec, which is the last name of brothers Paolo and Valter, its proprietors. This intrepid pair began making wine in 1997 under their name, and have quickly garnered some international attention (as much as a small family winery can) for their rendition of the Vitovska grape. Vodopivec farms and produces its wine biodynamically, which means, among other things, that they use no pesticides or man-made fertilizers, no industrial yeasts, and do not filter or fine their wine. Fermentations are not temperature controlled, and the wine is aged in old oak casks for 2 years before aging another six months in bottle before release.

The winery produces about 260 cases of this single wine per year (up from about 120 cases in 1997) off of its roughly 10 acres of vineyards, which are farmed to produce extremely low yields.

Tasting Notes:
Beautifully amber-orange in the glass, this wine is astonishingly unique from the moment you first set eyes on it. The nose offers aromas of guava, paraffin, and yellow roses, and in the mouth it is slick, like wearing silk underwear on satin sheets. Beautifully balanced acidity is matched with balanced flavors that hang between a minerality and a gorgeous floral quality that incorporates flavors of orange blossom, vanilla, and passion fruit that linger into a long finish with a slightly nutty quality. Though I have no frame of reference for this wine or grape variety, based on the character of other regional wines of a similar type, I suspect that this wine will basically age forever. If I only had enough money to afford to watch it do so….

Food Pairing:
I would love to drink this wine with a plate of grilled squid and other seafood, accompanied perhaps by a little homemade pasta with olive oil and herbs.

The 2002 vintage of this wine is tough to find online, but the 2003 and 2004 vintages are available for purchase on the internet.