Book Review: I’ll Drink To That, by Rudolph Chelminski 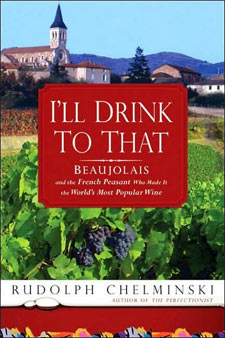 “The story of how Beaujolais reached its present prominence is worth a look because it encapsulates so much not only about the wine itself but also about France and the French themselves: this quick, talented, nervous, occasionally maddening but altogether admirable people.”

So writes Rudolph Chelminski in the opening chapter of his book about Beaujolais: the wine (or more aptly, wines); “the” Beaujolais,” as he reminds readers to call the region; and Georges Duboeuf—known as “Mr. Beaujolais” in the wine world. Duboeuf is the driven “French peasant” of the title, seemingly an intuitive marketing genius, who rose to become a household name in France and one of his country’s most prominent wine négociants.

Whether Beaujolais has ever been the world’s most popular wine, as the title suggests, is open to dispute. And Chelminski has come in for some flak for what, in no small part, is an unqualified homage to Duboeuf.

To this end, the author is unapologetic. He does not claim objectivity. He makes no bones about the fact that he was inspired by personal interest and his esteem for Duboeuf to write this book. And, interviewed in California, he said he does not regard himself as a wine expert.

But Chelminski is an author and journalist of note. He transplanted from the U.S. to France after Life magazine sent him to Paris more than 30 years ago. His previous book, The Perfectionist: Life and Death in Haute Cuisine, recounting the death by suicide in 2003 of French chef Bernard Loiseau, was well received. His wide-ranging background and journalistic credibility combine for a big-picture perspective, full of vivid and compelling word-pictures, entertaining storytelling, and a sweeping vision that weaves in history, geography, economics, sexual politics, literature and a bunch of other things.

We learn, for example, about France’s phylloxera epidemic, which devastated the wine industry in the 19th century. We’re told about the plight and subsequent rise to prominence of the Gamay grape. We are given alluring details about the “stunningly beautiful” little rectangle of French countryside between Mâcon and Lyon— the Beaujolais—where 55,000 of the world’s 80,000 acres of Gamay grapes grow.

The scope of the book includes such unexpected details as the culinary identity of Lyon today, with mention of some food items one might prefer not to think about—sheep’s feet and testicles and donkey snout, for example. Then there is the relationship between taciturn workaholic Duboeuf and renowned charismatic French chef, Paul Bocuse. Chelminski also knows Bocuse well; before The Perfectionist, he wrote The French at Table: Why the French Know How to Eat Better Than Any People on Earth and How They Have Gone About It, from the Gauls to Paul Bocuse.

I’ll Drink to That wouldn’t be a book about Beaujolais without its entertaining account of the rise and various iterations of the phenomenon of Beaujolais Nouveau, the annual November celebrations that surround its release, and the wildly publicized Beaujolais Nouveau Run to deliver the new vintage around the world, increasingly controversial because of the astonishing fuel consumption it requires.

Chelminski’s book is an entertaining and educational read for anyone interested in wine or France, although I did find it a little long-winded in parts. While I appreciated the context, scope and depth—and the fact that, to its credit, much of it reads like a travel book—I found that by including so much and so many details, it dragged for me here and there. But in the final analysis, reading Chelminski’s book made me want to go to the Beaujolais to drink some of the wines right there in the French countryside.

Rudolph Chelminski, I’ll Drink to That: Beaujolais and the French Peasant Who Made It the World’s Most Popular Wine, Gotham Books, 2007, $16.50 (hardback)


Wanda Hennig’s early wine education was gleaned while at university in South Africa, drinking vast quantities of cheap plonk. A long-time journalist there, her first California job was as an editor on the now defunct Napa”based Appellation magazine. She writes extensively about lifestyle subjects, including food and wine, for Bay Area and international publications.