Book Review: The Botanist and the Vintner by Christy Campbell 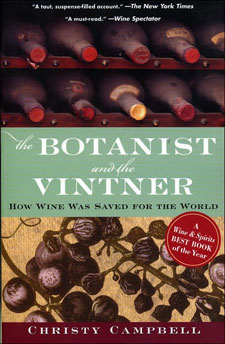 They say those who do not learn from history are doomed to repeat it, but many of the events of the past were so dependent upon the knowledge of the times, that there is simply no way they could ever occur again. Indeed, those of us who are alive today take certain moments in history for granted, precisely because our modern experience blinds us to the extent of the crisis that these events most certainly represented at the time.

Such is the case for the modern wine lover, who enjoys a bottle with the carefree ignorance that there was a period of time when, had things not gone quite right, civilization may have lost wine forever.

The date was 1862, just three years after the publishing of Charles Darwin’s The Origin of Species by Means of Natural Selection, and the people of Western Europe were just weaning themselves off of some of their more fanciful suppositions about the way the world worked. Many of the complexities of biology and botany were still shrouded in mystery (thankfully bloodletting had been abandoned by this point), which meant that the unfortunate vignerons of France were completely unprepared to deal with the utter devastation about to be wrought upon them in the form of an unusually diabolical insect that would come to be known as phylloxera vastatrix.

Christy Campbell’s The Botanist and the Vintner: How Wine Was Saved for the World, recounts in vivid detail the events that would unfold over the following forty years as France, and soon the rest of the wine regions of Europe, grappled with a foe they could hardly see, let alone understand. These events, and the various personalities that emerged to both explain and do battle with the insect that would eventually kill nearly every single grape vine in continental Europe make for an epic drama that is as fascinating as it is important for our understanding of the wine that we enjoy even today.

A single glance at the bibliography and footnotes of Campbell’s impeccably researched book demonstrates the sheer accomplishment this narrative represents. For no other reason than the author’s ability to puzzle out the precise sequence of events that began with a parcel of just a few American grapevines planted in the backyard of a French nursery and ends four decades later with a scene of devastation worthy of Hollywood’s best, the book would be a triumph of scholarship. But Campbell has managed to do more than simply connect the faded dots of correspondence and news stories across two centuries and several continental wars. The Botanist and the Vintner brings to life the enormity of the struggle, confusion, and desperation of a continent that is forced to watch its treasured wine industry literally wither on the vine, as well as the exhausted relief (or continued denial) of a people who finally find a solution.

With elegant and vivid prose, Campbell does an admirable job of constructing a real narrative out of what were doubtless a quagmire of confused, frantic, and altogether chaotic communications between and among the many players in this turn-of-the-century drama. At times, however, the thread that connects the several botanists and the many vintners gets lost amongst the jumbled events of the times. I emerged from the reverie of the compelling story not knowing exactly which of the several heroes did what, or about when they did it, but that hardly matters. Neither the strength of the story nor the quality of the book hang on a precise reconstruction of the relationships and actions of the characters, as the plot remains inexorably clear, and compelling, from ignorance to devastation to rebirth.

It’s the devastation, and the way that so many tried to deal with it that proves to be some of the most fascinating and entertaining stuff of the book. The farmers of France do battle with their adversary as best they can, and it’s hard not to feel empathy for a people fighting an enemy that is practically invisible to them, not to mention so utterly complex and sophisticated in its biology that it might as well be an advanced alien race. A member of the aphid family, Phylloxera has a lifecycle so complex it is difficult to understand even today. It manifests in roughly 10 different forms throughout its cycle, including eggs, larvae, winged, non-winged asexual, non-winged sexual, aboveground crawlers, belowground crawlers, and more. Capable of reproducing on the scale of billions within just a few months, it is the ultimate vine killing machine.

Its many forms and sheer ferocity drove French winegrowers (as well as many entrepreneurial souls) to devise the most amazing, and sometimes hilarious, variety of attacks against the insect: hazel-branch crosses gilded with flowers and prayers to ancient gods; roots drenched with white wine; toads should be buried near the blighted vines; strong smelling plants should be planted as cover crops; leaves should be doused with cow’s urine, copper sulfate, powdered tobacco or walnut leaves; whale oil and petrol should be applied to the roots; hot sealing wax on the leaves; crushed bone and sulphuric acid on the ground; moles, crayfish, magnetism, “electrical commotions”; and countless other “miracle cures.”

In the end, the scientific method and deductions using Darwin’s new principles lead to the grafting of traditional French grape varieties onto American rootstocks that have evolved resistance to the insect, and the world’s wine industry can breathe a sigh of relief. The happy ending leaves the reader marveling at the perseverance and ingenuity of the many protagonists of the times, but also at the fact that they succeeded at all. This is one of those few books about wine that nearly anyone can enjoy, just as it easily deepens a wine lovers appreciation for the source of their passion.

Christy Campbell, The Botanist and the Vintner: How Wine Was Saved For The World, Algonquin Books 2006 $11.21 (Softcover).