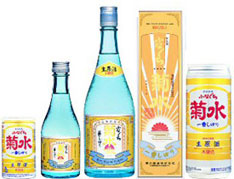 I’ll admit it right off the bat: I’m a serious sake snob. I don’t mean that in the sense that I believe my taste in aake is superior to anyone else’s, only that I’m extremely picky when it comes to sake. In particular, I tend to discriminate on the basis of the class of sake. I tend to prefer ginjo and daiginjo sakes, and most often the junmai versions of these. Ginjo and daiginjo are the two top classes of sake, as measured by the degree to which the rice kernels used to make them have been milled or polished down to a fraction of their former size. Junmai refers to a sake making process that does not involve the addition of alcohol during the fermentation process (which tends to increase the aromatics of the final product, rather than increase its alcoholic strength).

My preference for these brews lies in my appreciation and preference for a particular set of qualities possessed by sake: light, ethereal, floral qualities that evoke a flower garden after a rainstorm. My attraction to such flavors, and the types of sake that most often deliver them tends to steer me away from several other types of sake, including the lowest grade of “quality designated” sakes classified under the designation honzojo Honzojo sakes are typically made from rice that has been polished down to at least 70% of its original mass, though technically there is no strict requirement on how much it is milled.

Of course, there’s nothing wrong at all with honzojo sakes (or the ordinary, non-designated sakes which make up more than 75% of the total volume of sake production in Japan), which can have every bit as much personality and appeal as their more “refined” ginjo and daiginjo cousins. Still, it’s rare that I come across an example of a honzojo sake that makes me sit up and take notice, which is why I was quite astonished when, at a recent dinner in Tokyo at a tiny restaurant with some friends, I was told the sake I was enjoying so much was a simple honzojo.

At least, that’s the easiest way to briefly describe this sake from a brewery called Kikusui. The true story of the sake is a bit more complicated. While most certainly a classic honzojo sake, this sake is also a namazake, which means that it is not pasteurized before bottling. Wine lovers can think of namazake like they might wine made from “free run juice,” the wine which pours off of the newly fermented grapes without the aid of a press. Also known as “draft” sake, this type of sake is quite delicate in disposition, and easily affected by age, sunlight, and other environmental factors.

Indeed, the commercial sale of such sake on a broad scale was not possible until Kikusui figured out how to stabilize these sakes enough to get them into a bottle, or as is common these days, a can. At least according to the brewery, Kikusui was the first to commercially package and sell namazake.

The instability and mutability of namazake is part of the appeal for many people. Soon after bottling and release, draft sake has a freshness of acidity and purity of flavor that makes it extra appealing to folks like me that seek more subtlety from our sake. After six months, the flavor begins to incorporate more woody, creamy, and herbal components, and at a year or more, the sake can taste downright mushroomy. Such variation and the affinity for it among sake lovers in Japan has led Kikusui to also release an “aged” version of this sake.

The Kikusui Brewery was established in 1881 after the 16-year-old Setsugoro Takasawa was given a liquor license by his uncle so that he might start his own business. With no knowledge of what was a poorly documented and poorly understood process at the time, it took years for Takasawa to produce a commercially viable product, but in 1896 the brewery was granted the more official designation of an approved sake producer. Three generations later, after relocating to Niigata prefecture, the brewery is still managed by the descendants of its founder.

Tasting Notes:
Colorless in the glass, this sake has a nose that hints at pink bubblegum, rainwater, and pastry cream. In the mouth it is slippery and slightly thick on the tongue, with bright acidity enveloping flavors of rainwater, white flowers, and linalool (think: the smell of fruit loops), with a tiny bit of alcoholic heat on the finish. The overall impression is fresh and bouncy, like an enthusiastic two year old just out of the bath.

Food Pairing:
I had this sake with a chawan mushi — a savory steamed egg custard filled with crab, and it was a delightful pairing — though it also stood up to grilled Kobe beef later in the meal.