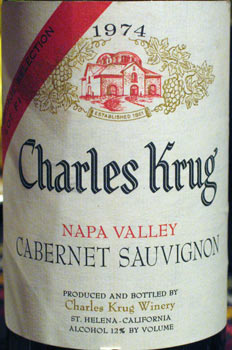 Do you want to know a little secret? I’m probably going to catch hell for telling you, especially from my friend Jack who served this wine to me, and who let me in on the secret in the first place. But he should know better than to tell a blogger anything.

So here goes: Pre-1980 California Cabernets are some of the best buys in the wine world right now. Sure, some of them, especially pristine bottlings of reserve Beringer, BV, Heitz, or Stags’ Leap wines are going for hundreds of dollars per bottle, but with a little effort you can find bottles like this one, sometimes for under $30.

And some of these wines are simply tremendous.

The Charles Krug Winery, established in 1861 was one of the very first wineries to be established in the Napa Valley. Its founder, an enterprising young man of German-American heritage, came to San Francisco in the mid 1850’s to work as a journalist. Perhaps disillusioned with the newspaper business, which even back then was undergoing consolidation, he decided to try his hand at growing grapes as a means of supporting himself. He didn’t have much luck growing them (in the hills above what is now San Mateo) until he hooked up with an equally unsuccessful grape grower by the name of Augustin Haraszthy who convinced Krug that they should look elsewhere. This would prove fateful advice for them both, as Haraszthy would become known as the founder of the California wine industry, and Krug, one of its first success stories.

After the pair found their way to the Sonoma Valley, they secured work in a vineyard site that would later become Buena Vista winery, and began teaching themselves how to make wine. Krug was a quick study, and his talents were noticed by a number of people, but perhaps most importantly by a wealthy landowner named Louis Bruck who lured him to the Napa Valley. A few years later, after a short career as what wine historian John Olney suggests might be the first consulting winemaker in the history of California wine, Krug married Bruck’s sister-in-law, whose hand in marriage also came with the added bonus of 500 acres just north of the tiny hamlet known as St. Helena.

In short order Krug built his own winery (and then rebuilt it, and then built another as the first one burned down) and set about making some of Napa’s first commercial wines with the help of another young man of German descent named Jacob Beringer. Yes, that Beringer.

In 1875 at the height of his success Charles Krug founded the St. Helena Viticultural Society. That success proved short-lived, however, as winery after winery succumbed to the infestation of Phylloxera that was at the same time ravaging the vineyards of Europe. Krug, who once bankrolled many other winemakers, went bankrupt in 1891 and died about a year later.

After changing hands a couple more times through prohibition, the estate was purchased by an Italian immigrant named Cesare Mondavi, and became the birthplace and the battleground of America’s most famous and fractured wine dynasty.

In 1974 the Charles Krug winery was producing more than one million cases of wine per year, and was one of the most commercially successful wineries in the history of Napa Valley. It was also known the site of one of the most bitter family sagas that the California wine industry has known, the rift between brothers Peter and Robert Mondavi.

1974 was by all accounts one of the best vintages in California history. I’m not sure who was making the wine at this point at Charles Krug, as production had gotten big enough that Peter Mondavi wasn’t doing it all himself. In any case, the harvest was nearly perfect, and the wines were celebrated highly at the time.

Now, of course, this wine is old. So old, that most wine modern wine lovers would never imagine what a treasure lies inside. This bottle is a special selection from the winery “Lot F1” which as far as I can ascertain represents the winery’s top vineyard blocks and barrels in a given vintage. While this particular bottling commands more money at auction, if its quality is any indication, the regular bottlings have got to be worth the $25 I have seen them selling for as many people liquidate older wine collections in which they have been sitting for years.

The older Cabernets of Napa, like this wine, are marked by an elegance and a lightness that Napa will probably never again achieve (if only because global warming makes it impossible). Just 12% alcohol and very light bodied, this wine speaks the secrets of an earlier era in Napa winemaking that are beautiful and alluring.

Every time I have a wine like this, I tell myself I ought to spend more of my money hunting down treasures like this rather than buying current releases. My only problem is that I don’t have time to watch the auctions at WineBid. So for now, I simply enjoy the generosity of friends, and the magic of grapes that were picked in the year of my birth.

Tasting Notes:
Medium brick-red in color with blood red, powdery sediment, this wine smells of stewed prunes, raisins, and caramel. In the mouth it is gorgeously smooth, and not juicy exactly, but…lively on the palate — swirling with flavors of roasted meats, cedar smoke, figs, and a light funkiness of sweat. The finish, one of my favorite parts of older wines, doesn’t disappoint — soaring away in notes of caramel and root beer. Not the most amazing old California Cabernet I have had, but certainly an excellent example of the form. Tasting wines like this makes me feel extremely lucky. Lucky to be alive, and lucky to love wine.

Food Pairing:
This is one of those wines that, while enjoyable with lots of different foods, tends to make me want to push my plate away and simply sit with my eyes closed, and my mouth full of wine, slowly letting it drizzle down my throat. Sometimes wines are best savored on their own.

How Much?: $88 currently at retail, though can be had at auction for less.