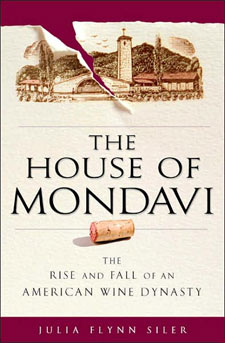 Carlo Rossi was a real person: a relative of Ernest and Julio Gallo. In the 1970s, the Gallos launched a new jug wine and decided “Carlo Rossi” (though he actually went by “Charlie.”) had the right ring to it. Now he’s famous and synonymous with cheap wine. This is not a bad thing: songs and even a band have been named after him. And people who buy Carlo Rossi wine do not turn up their noses at it — it’s bringing pleasure into their lives.

It seems that Robert Mondavi may be headed down the same path of immortality on a pedestal made of low-budget wine.

As recently as the mid-1990s, the name Robert Mondavi stood for quality and extravagance. It represented spare-no-expense winemaking and a corporate culture that respected pleasure as a worthwhile goal.

But now, the most commonly encountered wines with Robert Mondavi’s name on the label are the Private Selection line, generically produced wines found in drugstores and low-rent bodegas on several continents. Robert Mondavi — the first living inductee to the Vintners’ Hall of Fame, and the most important Napa County resident of the 20th century — is becoming Carlo Rossi in his own lifetime.

How did this happen? With stellar reporting and clear, enjoyable writing Julia Flynn Siler of the Wall Street Journal describes the long rise and sharp descent of California’s most iconic vintner in The House of Mondavi: The Rise and Fall of an American Wine Dynasty.

Siler took a long leave of absence to work on this book, and her research is simply outstanding. She captures the scope of Mondavi’s story, which amounts to King Lear in wine country.

Siler particularly excels at bringing back to life Robert’s parents, Cesare and Rosa. Reading the book, you can feel Cesare’s firm handshake, and you can smell the pasta sauce bubbling in Rosa’s kitchen. But you can equally feel the sadness when, over disagreements about how to run the family winery, Robert is essentially kicked out of the family.

For people of my generation the most memorable Mondavi family tragedy occurred in 2004, when the company’s board of directors forced the sale of the winery to Constellation Brands, eliminating the family’s connection altogether. Robert Mondavi spent his entire life trying to build an inheritable estate on par with the great chateaus of France, but now the family doesn’t even own his name.

But the true Mondavi family tragedy happened in the 1960s, and Siler captures both the details of the events and their deep emotional impact. Robert and his younger brother Peter had long fought over the direction of Charles Krug winery, which Robert had urged their father to buy. After their protracted conflict came to blows, Robert was banished from the company. Eventually he sued his own family and won, forcing Charles Krug into difficult financial times that took Peter’s side of the family 25 years to recover from.

Siler nicely evokes the personal details of the family squabble, like the tensions in Rosa’s kitchen. Being from the Journal, she also understands the financial aspects of the feud, explaining the resulting trial in interesting detail.

The book is at its strongest detailing first the Mondavi family’s rise, and then Robert’s rise to prominence on his own from the 1960s through the 1980s. Perhaps those are the years and events on which all of Siler’s sources are most in agreement.

The story starts to get a little messy — as it did in real life — as Robert’s sons, Michael and Timothy, tragically repeat their family’s historic mistake by fighting over the direction of Robert Mondavi Winery. Their respective philosophies can be summarized as follows: Michael cared more about business, while Timothy cared more about making great wine.

Timothy’s supporters can make a very good case that the decline in quality of the company’s wines sunk the business, while Michael’s supporters can argue that Timothy was never realistic enough about the demands of a company the size of Robert Mondavi Winery. They’re both right, and both spoke to Siler, and she offers both sides’ interpretations of the events. It’s true history, but you know the old saw about “the winners write the history” – in this feud there was no winner, so the story isn’t easy to tell.

When it comes to the decline of the Mondavi empire, my only real complaint with this book involves Siler’s disdainful frowns at anything she perceives as luxurious.

Siler documents plenty of cases where the Mondavis spent profligately. They were certainly indulgent when economic times were good. But some of the things she scowls at sound like legitimate business expenses in the wine industry. Consider this passage (page 273, hardback edition): “With Mondavi’s long record of success, a culture of entitlement had set in. Two-hour lunches where employees lingered over a $50 bottle of wine were not unusual.”

People in the business of making, buying, selling (or writing about) wine have to drink $50 bottles — you simply have to know what they taste like. And two hours is a little long for lunch, but hardly worthy of notice in the food and wine industry.

Later in the same paragraph she writes, “instead of staying at budget motels, where staffers from Gallo stayed, Mondavi employees stayed at the Hilton in La Jolla and other four- or five-star spots.” At the time Mondavi was selling itself as a premium wine company, while Gallo’s fortunes were built on jug wines. I don’t know where winemakers visiting from France stay in La Jolla, but I’ll bet it ain’t Motel 6.

Siler implies that somehow these two-hour lunches, or free bottles of wine to employees, or people knocking off at 4 p.m. on Fridays, helped to sink the company. She also delves into great detail on some of the large, indisputably disastrous business decisions that cost Mondavi dearly, including a money-sink Chilean winery and an expensive deal to promote fine wine at Disneyland through a restaurant where the best-selling wine turned out to be White Zinfandel.

The book also details the large charitable commitments that Robert made, which irritated his sons because they saw that money as coming right out of their inheritances. Had Robert not made those promised donations when money got tight, the outcome might have been different. But Robert Mondavi would not be the great man that he is if he walked away from charitable commitments. By preserving one kind of legacy, he partially ensured the end of a different one.

A lesser complaint I have with the book is that while Siler clearly has a great many sources throughout the majority of the book, it’s pretty clear who her main source is on the forced sale of the company. Ted Hall came in from outside and made millions of dollars in a few months while executing a deal that ousted all of the Mondavi family members from the winery, yet he somehow comes across as a white knight in what was far from a clear cut situation.

I love that Siler lists her sources for various information: it gives her well-deserved credibility. It’s also useful here: Flip to the notes in the back for the chapter entitled “The Takeover” and you see that she gets her info mainly from Hall and Michael Mondavi, who was extremely embittered by this point in the family saga. She also uses material from Robert’s wife Margrit Biever Mondavi but doesn’t seem to trust her more than Hall. On a very minor point, the idea that Hall tried to cheer up Robert and Margrit after the sale by telling them they could travel more, Siler feels the need to write in the notes, “Ted Hall does not recall making this comment regarding flying first class or taking cruises, but Margrit Biever Mondavi recorded it in her diary entry for that day.”

These are nitpicks, however. Perhaps a larger issue worth speculating about might be this book’s place in history.

In 1993, Ellen Hawkes wrote an interesting book about the also-quarrelsome Gallo family entitled “Blood & Wine.” The book has faded somewhat from public consciousness even though the Gallos have not.

Many, many people’s lives in California’s Wine Country were touched by the Mondavis. I suspect every one of them who wants to read this book has already done so. In 15 years, will people still be interested in the tragic King Lear-like tale of a Carlo Rossi-like figure?

Put it this way: would you read a book called “The House of Rossi: His Meteoric Rise, Tragic Family Feuds and Sad Ending”? And how sad is the ending, really?

Timothy and Michael Mondavi may not have inherited an estate winery, but they’re not exactly poor. Robert and his brother Peter have finally made up, though resentment still simmers among some of the cousins.

There are worse fates than being remembered as a name (and maybe in the future, a smiling face) on millions of bottles of Constellation-produced California appellation wine.

I want a happy ending for Robert Mondavi. He lived large and lived well. His tireless promotion of Napa Valley and the “wine lifestyle” that he believed anyone should be able to enjoy, made life better for many people, myself included. Writing about wine wouldn’t be nearly so much fun if our area wineries weren’t so ambitious, a quality they owe a debt of gratitude to Mondavi for pioneering.

If Robert Mondavi’s legacy amounts to a few hours of joy for thousands of penny-pinching picnickers, or even 750ml of enjoyment for supermarket wine buyers everywhere, that’s worthwhile. His life — and Siler’s chronicling of it — are interesting enough to give The House of Mondavi readers a few hours of joy as well.

Julia Flynn Siler, The House of Mondavi: The Rise and Fall of an American Wine Dynasty, Gotham 2008, $10.20 (Paperback).