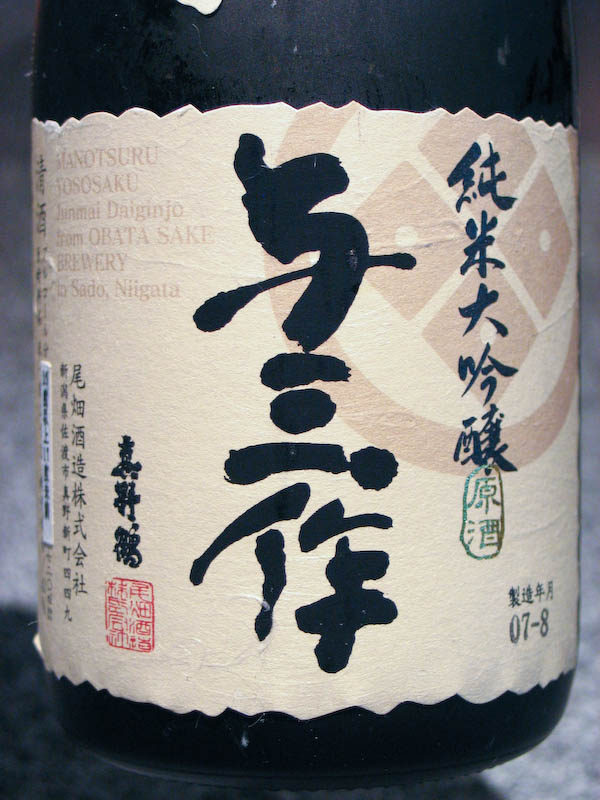 Sake brewing has a long and storied history in Japan, and because of the island nation’s relative isolation, many breweries can trace their origins back several centuries. Such timelines make it possible to suggest with only the smallest hint of jest, that having only been founded in 1885, Obata Shuzo is a relatively new kid on the sake brewing block.

Yososaku Obata opened his brewery in 1885 on an island off the western coast of Japan’s Niigata prefecture. A vintage photograph of the founder shows him dressed in a western suit, with a handlebar mustache that most Italian’s would be proud to own. Whatever Obata’s affection for western culture, his brewery stuck to tried and true methods of making sake that have made Niigata prefecture home to many of Japan’s best sakes for as long as anyone has known how to ferment rice.

The anvil shaped Sado Island, with its northern mountains and rocky coastlines is not the most hospitable place in Japan between November and February. Buffeted by storms that roll in off the sea of Japan, which also blanket the island with snow, Sado was a favorite place to exile political dissidents for many centuries until gold was discovered in the 1700’s and the island then became what was essentially one large forced labor camp.

Even today Sado remains fairly rural, and has become known, among other things for the very fine sake made by several local producers including Obata Shuzo. Making use of the pure natural spring water the flows out of the islands mountains, Sado’s winter months are now a flurry of activity as the sake brewers practice their craft and the snow drifts down.

The local population is extremely proud of their sake making heritage, so much so that the small town of Mano, which houses several breweries, has apparently declared itself an independent state of the Alcohol Republic. Whatever that means.

Obata Shuzo makes several sakes in their modest brewery on Sado, including this, their top bottling, which they affectionately name after the founder.

Unless you are a regular drinker of fine sake, you might not know that most sakes are made from only a few different types of rice, most of which are grown in a rather small area of eastern Japan. While the variety of rice doesn’t affect the flavor of the sake quite as much as the variety of grape determines the flavor of wine, rice variety does indeed play a big role in the flavor of sake, especially when the rice strain falls outside the ordinary. Yososaku Junmai Daiginjo is made from a variety of sake rice known as Gohyaku-mangoku cultivated and used primarily in the Niigata prefecture. This delicate rice produces some of the most famous of Niigata prefecture’s sakes, despite being notoriously difficult to mill down during the sake making process.

As a junmai daiginjo sake, this brew is made from rice grains that have been polished down to 40% of their original mass before brewing begins. Additionally, this sake has been made without the addition of alcohol during the brewing process (a technique which can enhance aromatics, though doesn’t change the overall alcohol content). Junmai sakes, which lack this addition of alcohol, tend to be more delicate in their aromas.

After fermentation, this sake is filtered at 5 degrees below zero, and is stored at this temperature until its release.

Tasting Notes:
Colorless and slightly viscous in the glass, this sake smells of green melon and rainwater. In the mouth it is crystalline in quality, its texture glassy, with exquisitely crisp flavors of wet stones, melon, pear, and hints of cream that hang in the periphery of the palate. It finishes beautifully, lingering long after I swallow, conjuring memories of deep snowdrifts on a moonlit night.

Food Pairing:
I enjoyed this sake with bincho sashimi, a rich albacore laden with winter fat. The two went beautifully together.

Unfortunately, I have no idea whether this sake is available in the United States. I know, I know. Why write a sake review about something you can’t get? Well, partially I’m hoping that someone will tell us where we CAN get this one, as it is one of the better sakes I’ve had in some time. Let’s see how powerful this Internet thing is.