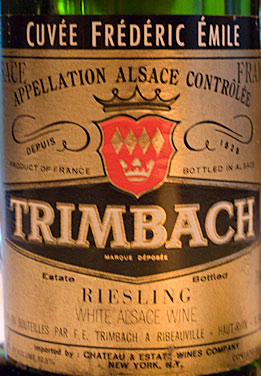 I can remember a time when the word “Alsace” only brought to mind dim memories of my 5th grade class discussion on some valley that people were fighting about in one of those big wars. In those days I definitely couldn’t spell Gewurztraminer, and I had only tried one or two of them.

Perhaps you’d call me a late bloomer when it came to Alsatian wine, but bloom I eventually did, and now I’m a quiet, but fierce devotee of what I believe to be some of the most individualistic wines on the planet. Alsace has always been an odd duck of a winegrowing region. It is the only region in France that not only allows, but mandates that the name of the grape variety appear on the label (though there are exceptions). It happens to grow grapes more associated with Germany and Northern Italy than with the rest of France (Riesling, Gewurztraminer, and Pinot Gris), and perhaps by virtue of its occasionally Germanic past, produces more beer than any other winegrowing region in the country.

Characterized by steep hillside vineyards whose sun exposure, coupled with the region’s cooler climate make for long slow grape maturation, Alsace has been worked by small village winemakers for centuries (major regional wars notwithstanding). There are thousands of producers in the region, though according to the Oxford Companion to Wine, about 175 of those producers make up nearly 80 percent of the regions production. Many of those 175 are still relatively small by French standards, but some, due to their tenure as well as success have grown to be significant producers that make enough wine for export all over the globe.

Trimbach (or more properly, Maison Trimbach) is perhaps one of the best known of these larger producers, and for good reason. The Trimbach family has been making wine under their name since progenitor Jean Trimbach founded the house label in 1636. Twelve generations later, the estate is still run by the family, and is synonymous with the region, producing what some consider to be the finest wines around.

For the first two hundred or so years, Trimbach wines were made, like many in the region, in relative obscurity. Produced and consumed all within a 25 mile radius, the wines were part of the fabric of village life. Around the turn of the 20th Century, however, the then proprietor Frederic Emile Trimbach submitted the family’s wines to be shown at the 1897 Brussels Exposition, where they were apparently greeted with significant acclaim.

Now, nearly 120 years after that initial success, Trimbach is known for producing two of the region’s finest wines — both Rieslings. One is bottled under the name Clos St. Hune, and comes from the Grand Cru Rosacker vineyard, and is widely regarded as the region’s best Riesling. The other is this wine, named after the enterprising Frederic Emile, whose marketing skills launched more than a century of prominence for his family winery. In addition to these top wines, Trimbach makes 13 other wines, in quantities ranging from a couple thousand cases to the tens of thousands.

Cuvee Frederic Emile is made mostly from grapes grown on a south-southeast facing hillside vineyard named Osterberg above the winery. The limestone rich soil of this Grand Cru vineyard drains quickly and deep, and the grapevines are, on average, 30 years old. The grapes are picked with painstaking deliberation into small shoulder baskets over a series of days, with the goal of selecting only fully ripe clusters of grapes. These clusters are destemmed and assiduously sorted, again to ensure only the choicest grapes are crushed and fermented, ever so slowly, with native yeasts.

I’m not sure about the total production of this wine. The Clos St. Hune is less than 600 cases, but I suspect Cuvee Frederic Emile is made in slightly larger quantities. Were it more plentiful, however, it might be more common to find beautiful aged bottles like this one that some good friends shared with me last month. Trimbach’s wines, especially their top cuvees, seem to age forever, and as they do, their personalities begin to truly shine.

Tasting Notes:
Pale gold in the glass, this wine has a shockingly bright nose of quince and honey that begs to be inhaled slowly, as if that were physically possible. On the tongue it is halogen bright, with gorgeous acidity that brings to life a swath of flavors ranging from fresh lemon juice and honey to paraffin and nut skin. The wine lasts forever in the mouth, lingering through its drawn out finish on vapors of pomelo and orange zest. A fantastic, distinctive wine.

Food Pairing:
Whatever you eat with this wine, make sure it’s damn good. I drank this on my birthday last month and enjoyed it with many things, but especially with a light cooked shellfish salad of crab, squid, octopus, and clams in an “ocean vinaigrette” with seasoned sesame.

This vintage of the wine can occasionally be found on the internet. Current releases can be purchased here.