Book Review: To Cork or Not To Cork by George Taber 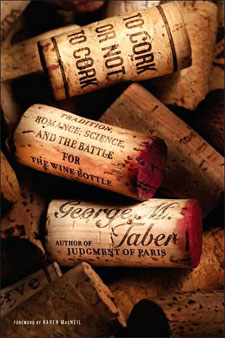 There’s only one thing, you might say, that stands between a thirsty wine lover and her wine. And luckily, that obstacle is usually easily overcome with one or more variations on a twist of a wrist.

Corks, screwcaps, crowncaps, glass stoppers, plastic corks, synthetic corks, agglomerated corks, the list goes on and on. 20 billion of them are used each year, and these closures which seal our precious bottles of wine are given very little thought by most wine drinkers. Indeed, we only tend to notice them when they are unexpected — a screwcap when we were thinking about cork, an exotic glass stopper sealed with a bit of tape– or when they give us particular trouble as we make our way to our desired glass.

Despite the fact that wine bottle closures are quite possibly the most critical technological component to the quality of the wine that we drink (once the winemaking and barrel aging process is complete) they are arguably the most mis-understood and under-appreciated aspects of wine production.

And while corks and their various replacements are ultimately the only things that prevent wine from becoming vinegar, they are also responsible for the ruination of millions of bottles of wine each year.

I’m not sure which is ultimately more stupefying — that after 2500 years we haven’t found a foolproof way to seal up a bottle of wine or that no one bothered to write an explanation of the reason why, until George Taber published To Cork or Not to Cork: Tradition, Romance, Science, and the Battle for the Wine Bottle.

Wine lovers who also like to indulge their passion through the written word will remember Taber for his previous work Judgment of Paris, the dramatic exposition of the 1976 Paris Tasting in which California wines were selected over their French counterparts in a blind tasting by French Judges.

To Cork or Not To Cork again demonstrates Taber’s skills as an investigative journalist and beautifully showcases his clear and cogent writing. There aren’t many page turners in the world of wine books, but this definitive history of wine closures comes awfully close.

Taber manages to coax a dramatic narrative out of an incredible array of research sources, starting from the historical and scientific background of corks, through the method of their production, the history of the industry, and the remarkable array of alternative closures that have arisen in the past few decades.

“To the wine consuming public,” Taber writes, “a cork is a cork is a cork,” but Taber does an excellent job of both explaining the wide variation in the means, method, and history of cork production, as well as the cause and extent of the dreaded cork taint that ultimately serves as both the villain and the catalyst for action in his narrative.

Cork taint, which often goes by TCA, a shortened version of its full name 2,4,6 Trichoroanisole, is a naturally occurring chemical compound that has doubtless been ruining wine for centuries. Yet readers may be surprised to learn that it was only identified as a cause of wine spoilage in 1981 thanks to the dedicated work of the Swiss German chemist Hans Tanner. His discovery of this compound, its common occurrence in cork, and the concentration levels at which it usually produces the aromas and flavors of wet cardboard in wine marks the beginning of the modern history of the wine cork.

Tanner’s findings set off a chain of events that Taber carefully explains and chronicles, covering the invention, development, marketing (and often subsequent failure) of the major synthetic corks and cork substitutes, as well as the crisis and near collapse of the cork industry as it attempted to deal with the impact of the proof that its product was faulty a large percentage of the time.

The world of cork and its would be successors is filled with interesting personalities, successes and failures, each carefully detailed by Taber as he explores the past 30 years of the wine world’s efforts to combat an invisible foe.

Generally, each chapter deals with a different player in the world of wine closures, and many tell the stories behind the technologies and trends that are commonplace in the wine world today, from the prevalence of screwcaps in New Zealand wine, to the spongy plastic corks that have begun to seal many of the wines found on grocery store shelves.

In between these chapters, Taber has inserted short stories of wine lovers and their own personal experiences dealing with faulty and perfect corks. Almost in admission of their melodrama, these “Messages in a Bottle” are italicized, and are frankly superfluous. They presumably were inserted to emphasize the reality of the cork taint problem, but they are more hokey than helpful.

Luckily these passages are easy to skip in favor of Taber’s excellent summaries of modern research on closures which are bound to teach even the most seasoned wine lover a thing or two. I learned that there is still no definitive scientific answer to how or whether corks actually transmit oxygen to the wine, nor how crucial this oxygen is in the maturation of the wine, for instance, and that the length of a cork in relation to the length of the neck of the bottle can have a dramatic effect on the cork’s potential to contaminate the wine.

It can’t be counted as a failing of To Cork or Not to Cork that it fails to answer its own title question. After 24 chapters and a section entitled “conclusion” that doesn’t really come to one (at least as far as the main question is concerned), the only certainty I could take from the book is that the world has still not found the perfect way to seal a bottle of wine or to eliminate taint from corks completely. But I now know a lot more about the people looking for both and how they are going about it, so I can say confidently that all we wine lovers have to do is watch from the sidelines with a glass in hand.